An extended Easter visit to our Northumberland alternative location provided an opportunity to get back up to Scotland to bag another SOTA summit. The last time that I was in the Moorfoots, I had tackled Windlestraw Law GM/SS-087 and I had tagged the HuMP of Whiteside Law GM/HSS-287 onto the itinerary. Now, a year later I had the opportunity to activate Blackhope Scar GM/SS-094, but due to the extremely wet conditions of late, I decided that adding a HuMP would be a summit too far this time around.

The departure from Amble on the Northumbrian coast was at a very leisurely 07:35z. I dropped my XYL Bev in Alnwick and headed north for the A697 to Wooler, Coldstream and then on into Scotland. With only a single summit planned, I was in a relaxed mood and even the fact that the satnav took me on a different route to that in 2017 did not phase me. I suppose there are several ways to get across to the A7.

I reached the parking spot on the B709 close to Wolf Cleugh (NT349480) at the planned time, but the single parking spot on the verge looked even smaller than it had in 2017 when I had stopped to check it out. The verge was also boggy, so I decided Plan B would come into play and I would park further south where there is much better parking (NT347464) and tackle the hill from the south-east rather than the east. This cost me a few minutes, but after a quick turn around, I was making my way back along the road by 09:56z.

Around 350 to 400 metres north of the parking spot is a track on the west side of the road. This steeply ascends the hillside and is shown on the 1:25000 Ordnance Survey map, but the OSM mapping on my GPS showed it was more extensive. The field gate was open when I arrived which surprised me, particularly as I caught up with a lone sheep as I ascended. The stone on the track was loose which slowed my progress, but I had to take care with this being a lone outing. At the 470m level I reached the lying snow which was sporadic at first, but increased as I gained height, but nowhere was cover continuous. As if to prove it was only just Spring, a hare still resplendent in its white coat dashed away from me as I rounded a bend in the track. No chance of a photo.

After several sharp bends, the track split, the surface becoming a combination of grass and sphagnum moss which was rather soggy. I took the left fork up the hill. With visibility reducing rapidly to around 100 metres, the track swing gradually to the left to pick up a fence line and after half a kilometre or so, I reached the intersection of three fences (NT336469) which has a spot height of 586m on the OSM. The following section followed the fence line to a 601m spot height (NT329479) where there is another intersection of fences. I was actually pleased there was lying snow along much of this section as this filled in the undulating peat hag, but I had to take care as its weight bearing capacity was very variable. On several occasions I ended up almost to the top of my leg in the snow and one particular heavy drop into the snow actually bruised my ankle.

Beyond the 601m point, having been put off by reports of extreme bogginess further along the fence line at Garvald Punks, I decided to take a reasonably direct route to the summit. This meant crossing the Hope Burn which was not too bad, but there are lots of undulations to reconnoitre as well and with the limited visibility I had to keep stopping to check my GPS. Eventually I reached a quad bike track which took me almost to the summit. The time from the car was exactly 2 hours and the distance was 4.9km. Slow, but I didn’t care, after all 11:56z was only 6 minutes later than planned. 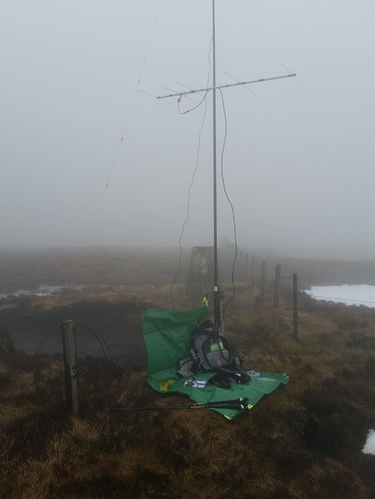 Operation in the mist

There was a very stiff breeze blowing at the summit, so I set up my tarp on the fence in order to get some shelter. I decided to put both the HF and 2m yagi on the pole so I could occasionally check 2m for Adrian MM0TAI who had alerted for a hill to the north of me. As I pegged out the second leg of the HF dipole, the wire snapped. Repairing this created a delay in getting on and it was 12:35z by the time I called CQ on 30m. Then a second problem occurred – the lead to the key went intermittent. More repair work and I was back in business, but would the RBN pick me up a second time? I decided to place a self-spot to try to get going quickly, but this created a third problem as the spot came out as G8CXK/P. Unfortunately I did not realise what had happened until a while later and I deleted the spot. Some ops asked me to clarify my callsign, but others unfortunately recorded the incorrect one from the spot. 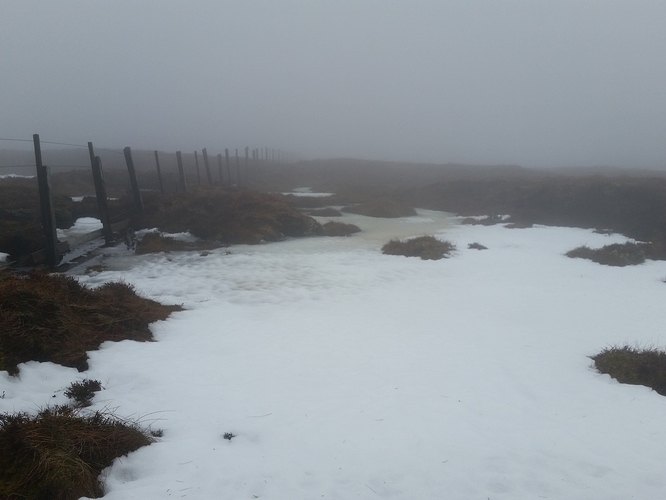 View from the shack - don’t you just love days like these?

First in the log was Fabio IK2LEY followed quickly by Fred DL1FU who was a bit off frequency as usual and I could easily read his morse through the melee that resulted when I signed with Fabio. After a number of contacts, a distinct /P broke through and the only S2S of the outing was soon in the log - Hansruedi, DL/HB9AGO/P on Auf dem Hochstraess, DL/AL-277. A total of 11 contacts around I, DL, HB9, SM, OH, OE and EA were made on the band, the final one being a duplicate with Hansjoerg OE7PHI, no doubt prompted by the incorrect spot.
After a brief look and call on 2m without result, I moved to 20m CW. Milan S58MU was first into the log on this band. I worked another 11 contacts on the band, mostly to south / eastern Europe - S5, YO, LZ, RW3, OK and OM. However, there was some DX in the form of Phil VE1WT and Rich N4EX, plus a surprise - Ken GM0AXY by groundwave.

After several unanswered calls, I decided to self spot and move to 2m SSB. This alerted Don G0RQL who was worked with 53 / 41 reports and a lot of QSB. Someone else called me a little later, but I was unable to get the antenna in their direction as the breeze was now very strong and the pole was drenched with the mist. After failing to improve the situation and no response on 2m FM, I decided to see whether 20m SSB would produce any contacts, Unfortunately my low power was not getting through to those calling, so I decided to go QRT at 14:15z and have a snack before packing the kit.

Once I had everything stowed apart from the tarp, I called my XYL to let her know I was running an hour behind schedule. Amazingly I had a full strength phone signal and 4G on the summit – better than many urban areas. I set off down the hill at 14:44z and headed for Garvald Punks in order to avoid the burn. The ground conditions on this slightly longer route turned out to be much better than I had anticipated. However, care was required as the snow was now less capable of carrying my weight. 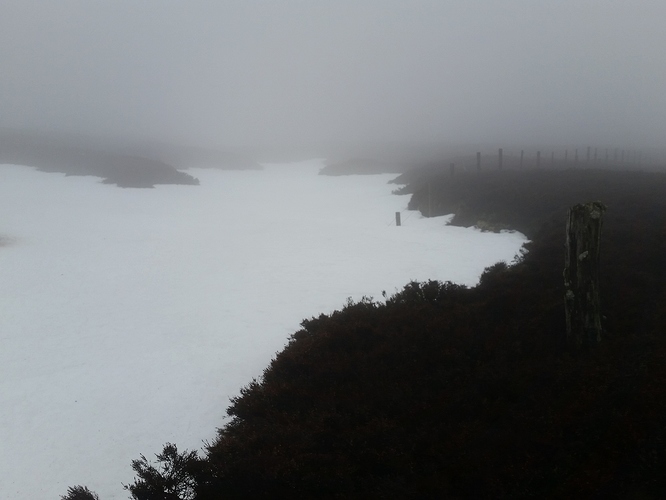 A grey day - note the fence disappears beneath the snow.

It rained quite heavily on the descent, so I was relieved when I reached the car at 16:22z. After finishing off the food and water I had with me, I set off on the 83 miles back down south, a drive of 2 hours and 5 minutes.

My last report noted that I was still awaiting surgery. Well, I did have a date for this for 26th April, but it has already been postponed until 18th May. As I am obviously not an urgent case, the date may slip further, so it is rather an unknown as to when I will be able to get back onto the hills. However, the target of Ben Nevis GM/WS-001 in the autumn now looks to be in doubt, so I have refocused on 2019 for that outing.

Many thanks to all the chasers that came on to work me.

Thanks for another detailed write up Gerald along with the scenery in the mirky mist.Very pleased you left 2mtrs ssb until later in to the activation as I was out earlier and very pleased to have worked you on my return. 73 Don. Though a lot more rotating horizon polluters about these days!

Keep well and catch you soon again in GM. Now off for some more GM/SS’s on west Loch Fyne. On the Alerts

Who is that young man leaning on the trigpoint?

Thanks for the views - pleasant enough, but they look a bit like those from some other summits so I won’t be desperate to get back up there to see them for myself.

Looks better on a nice day. The WX (when I remembered the camera) was somewhere in between. Looks almost like it’s worth going back in Jack’s photos!

The other side of the trig. There was so much black gloop at the top I had to hop about looking for ground that would support my weight. I recall the only place where I saw more horrible bog was on Ben Challum! 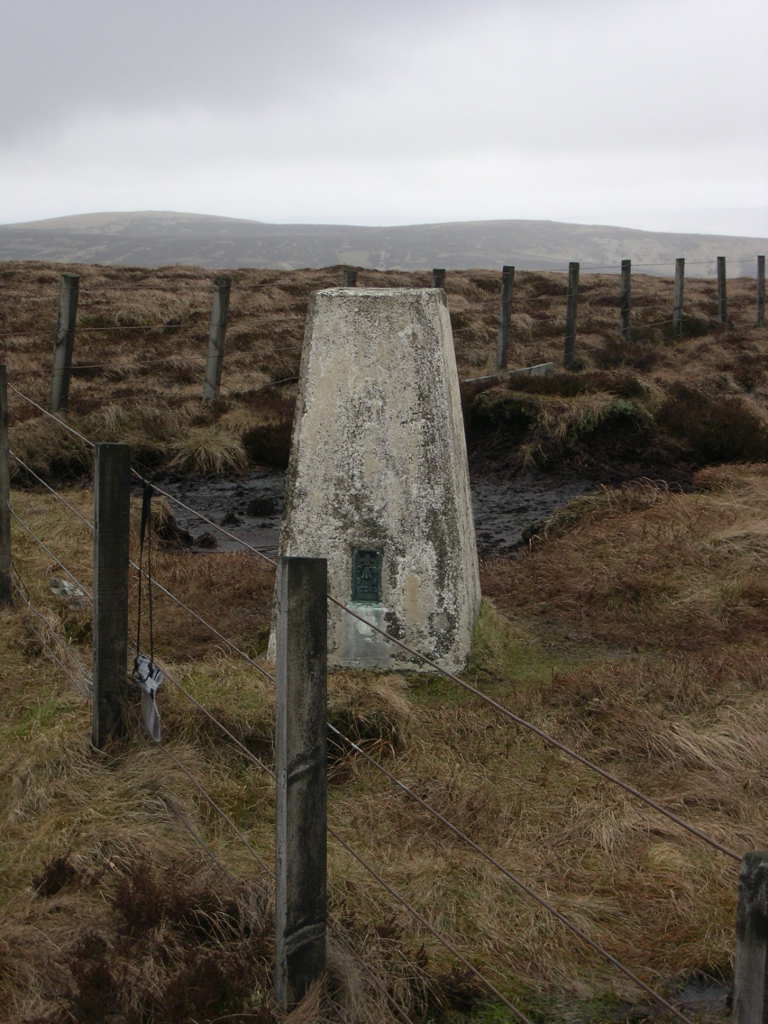 It will be what it will be Paul. The problem is that while I am capable of ascending 2000+ foot hills, then I am hardly an urgent case. It does tend to limit what arrangements I can make, but if it moves into June or beyond, then I will definitely be out the door and up a hill as soon as I am able!