We activated this pair either side of a visit to the Blackpool rally.

We had left home under cloud after early rain, but the forecast was for better weather later, but with the possibility of heavy showers. By the time we joined the M1 the sun was shining, and continued to do so all the way to the rough roadside parking by the Pennine Way crossing of the A635. There were a few clouds but the sun was still shining with the car thermometer was reading over 10C, and it was warm enough for us to set off along the Pennine Way with just light jackets over our shirts.

The path was quite wet, with the area by the road churned up by sheep. We were glad of the flagstones, though in places these were under water. The streams in Reap Hill Clough and Dean Clough were both high enough that we needed to use stones that were under water. As we were approaching the summit we heard Victor M0JST calling from Seat Sandal, so we hurried along to the prominent white painted trig point which seemed to be leaning more then we remembered. We quickly worked both Victors S2S. It had now clouded over and there was enough breeze that we needed to don extra clothing layers. 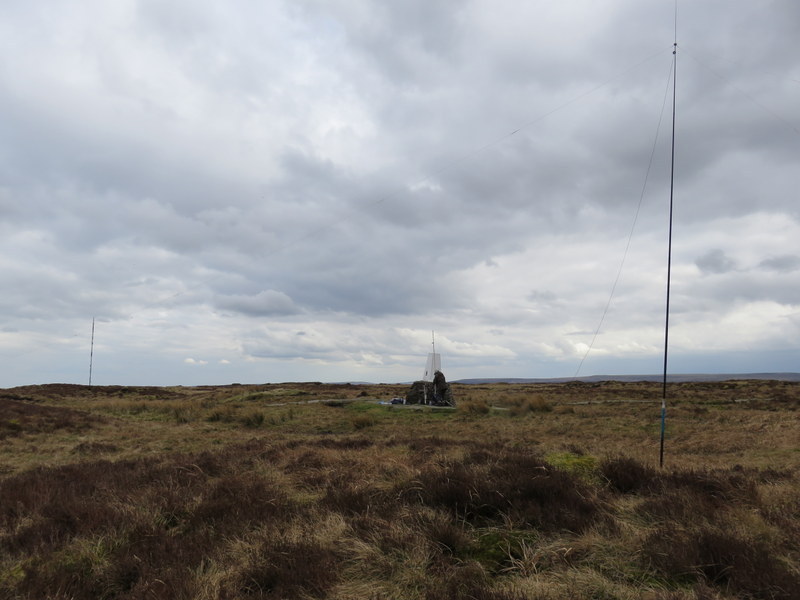 Caroline set up the MFD propped against the base of the trig point while Martyn somehow managed to find a dryish spot to set up HF in the boggy area to the west of the trig. Caroline qualified the hill on 2m FM easily with 9 more contacts, and Martyn qualified on 5MHz though it was a bit slow with just 7 contacts. Caroline decided that she wanted to have a quick go on 40m, even though we were short of time, getting 13 contacts in 12 minutes. She returned briefly to 2m FM while Martyn started dismantling the HF antenna. She picked up another S2S with Ron GW0HRT on Foel Fenlli, plus 3 more locals. When the last caller told her the weather in Manchester was horrible, she turned round to look west to observe nasty weather approaching from the west. Time for a rapid station pack up and rapid descent. Unfortunately, we didn’t make it all the way back to the car before the bad weather got to us, and by the time we got to Dean Clough it was raining heavily.

We dumped things back in the car as fast as possible, and as we were changing out of our boots the rain turned sleet, and we noted the car thermometer was now reading 1C. An example of how rapidly things can change on the hills. The forecast had been for showers, but the sleet and rain continued as we drove round Manchester, only easing as we headed past Preston – some shower!

We had hoped to do one of the Lancashire hills we hadn’t done for a while – Freehold’s Top or Hail Storm Hill, but the forecast was for a band of rain hanging over the Lancashire/Yorkshire Pennine. The rain had almost stopped by the time we were leaving Blackpool, but got steadily heavier as we headed west on the M55, and was heavy by the time we started heading south on the M6. The forecast was for less rain further south, so we continued on the M6.

By the time we pulled into Knutsford Services the rain had stopped, but there was still solid cloud, so we decided to head to the Cloud. As we approached the Timbersbrook Picnic area parking we had a good view of the Cloud, with the clouds thankfully well above the top. We like the Timbersbrook approach to the Cloud – not the shortest but with varied interest. We headed through the picnic area meadow, up the steps, and left up the road to the Gritstone trail path, which was rather muddy and slippery as it climbed steeply through the trees. The squeeze stile where the path emerged onto the track seemed tighter than usual. We headed up the track passing a house with ducks, chickens and a cat, forking left to ascend past a National Trust sign. At the next splitting of tracks we took the second path from the right which meanders through the trees – muddy in places. As we were nearing the top of the trees we heard GW8NZN calling from NW-054 Penycloddiau: Caroline had a brief chat but we agreed to leave a proper contact until we were on the summit in about 10 minutes.

We emerged onto the open heathland and the trig point and toposcope came into view. It was still very cloudy but dry, and the summit was quiet, so Caroline decided to set up by the trig point while Martyn set up HF in the heathery area without blocking the paths. Despite several calls and trying the frequencies she had heard GW8NZN on she failed to find him again, and resorted to working a few stations on the handheld to qualify the hill in the hope the other summit would find her without luck. With the hill qualified Caroline then set up the proper station of FT817 and MFD, getting a good run of 20 contacts on 2m FM. Having missed Alan G4VPX on Dale Head on 7MHz, she was surprised to hear him faintly calling on 2m FM – I have the model that Dale Head doesn’t have a good path south – but we both made the S2S. With the FT817 on 2m Caroline tried 70cms on the handheld with a whip, getting just the one contact – surprisingly finding the handheld was suffering high noise levels on 70cms – it usually suffers more on 2m. Martyn found both 5MHz and 7MHz slow, getting 6 on 5MHz and 9 on 7MHz. With Caroline’s lunch eaten she took over HF to have ago on 14MHz, which she found even slower, but her 6 contacts included one difficult transatlantic one. Returning the VHF and UHF for final calls Caroline picked up 2 more 70cms and 3 more 2m contacts – a reasonable haul! 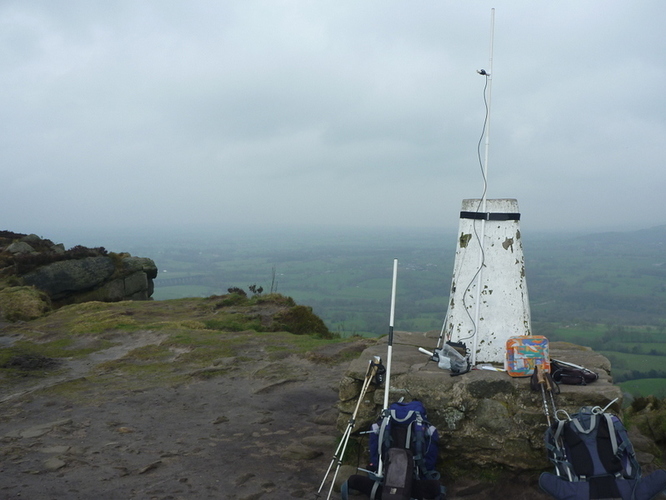 Towards the end of the activation the sun tried, but didn’t really succeed in coming out. The views remained limited by mist, but we still thought it worthwhile to return by the path running along the top of the north west scarp – a pleasant path, though the trees occasionally challenged the rucksack antenna. Re-joining our outward route we avoided the narrow squeeze and steep muddy descent of the Gritstone trail by following the track all the way to the road.

Thank you both for the summit to summit and it was lovely to have a chat once again at the Blackpool radio rally. I couldn’t believe it when I heard Caroline calling and was delighted when she answered as the path between us was not that good. Anyway we made it and thank you for the report. Looking forward to the next contact.

Thank you both for the summit to summit.

Yes, we were pleased with that, and after you both Martyn and I managed another S2S, but with different stations because in both cases the copy was too difficult to try to explain that there was another station who would like an S2S. I had a 31 both ways 2m FM exchange with John GW0MHF on Yr Aran - we somehow managed to have enough of a conversation for him to convey that the snow Martyn & I had encountered on it last month had gone, but he couldn’t see anything from the summit either!