I thought to emulate Fraser MM0EFI, with his VK/ZL exploits a few days ago, by trying a dawn start. Benaquhallie is a comfortable 1 pointer 15 minutes drive from my home QTH. It has an ATV track all the way to the top, has a relatively flat AZ with short heather and a large cairn should wind shelter be needed. Limited parking is available at the start of the track.

Route up1418×670 329 KB
I first activated this hill in 2020 and at that time I parked next to a ruined barn at the house called Upper Broomhill. Conscious of the early hour, this time I parked in a convenient pull-off on the track up to the neighbouring house of Upper Dagie. Then the ATV track just wends its way up; there is a gate across at the start of a small fir plantation but a pedestrian gate is provided. The track eventually meets a wall that runs up to the summit and a track (which is not shown on the OS map but is clearly visible on Google Earth) runs up parallel to the wall. The walk up took me about 40 minutes.

The track by the wall -looking uphill 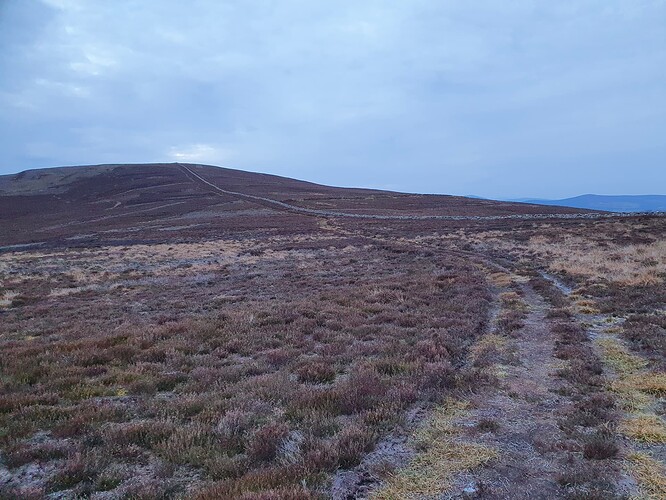 and looking back down 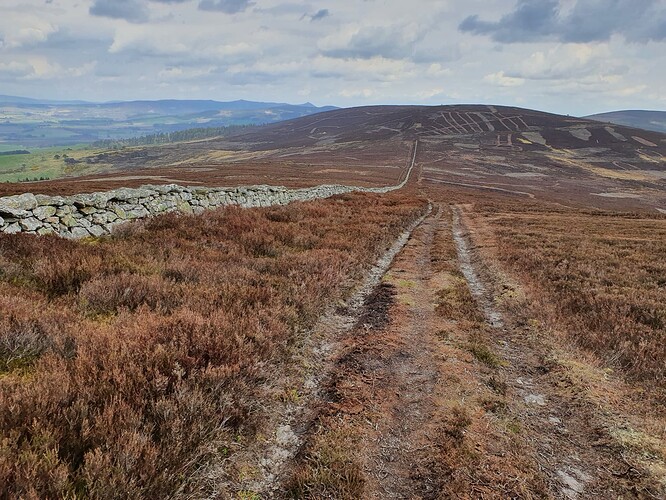 The large cairn just south of the trig point 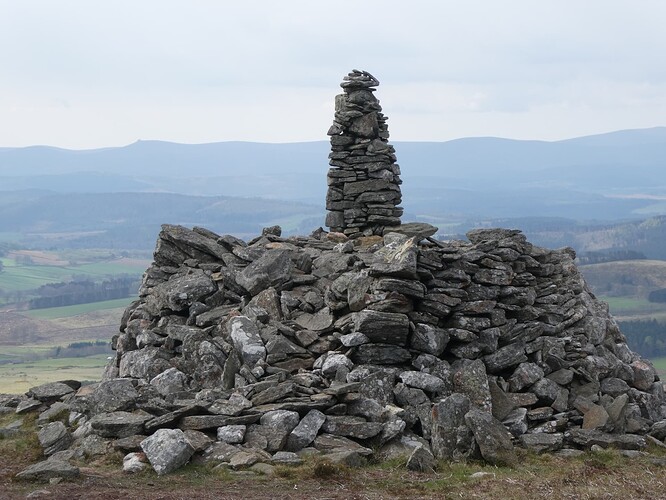 Activation
I put up delta loops for 20 and 17m and was QRV on time for once at 0530z. 20m was pretty quiet and after a spot and a few minutes CQing it was early risers in EU that called in, starting with Eric F5JKK, swiftly followed by Chris F4WBN. It was very slow going and probably the most CQ calls I’ve put out on 20m, producing just 11 in the log by 0600z. I saw a useful spot from VK1AD telling me that the freq I was using was being hammered at his end by QRM, so I QSYd up to the top end of the band but that didn’t help much. I then tried 17m and got just the one QSO with SV2FLM. It seems that the drop in SFI over the last couple of days was not doing me any favours.
I went back to 20m and finally (hooray!) got a VK in the log at 0622z - VK3AFW who was 57 with me and he gave me 33

Still, things started to get a bit busier as EU woke up and the husband and wife team of SQ9MDF and SQ9NOT gave me my first S2S of the day.
Just before 0700z I put up my Sotabeams linked dipole to give me 40m and got a quick S2S with TM2IF. Switching back and forth between 20 and 40m, MW0MZM/P was my second S2S on 40m and then 20m produced a couple of surprises - W4JKC Tom in SC called in - he’d woken up, couldn’t sleep so had turned on his radio. Then Paul VK5PAS gave me 55

but he was my last VK of the day at 0743z.
Seeing a spot for 4O/YU0W/P in Montenegro I got out the key for a CW S2S with him on 20m and then spent 15 minutes on 40m with a good run of 22 in the log. I then picked up 5 more S2S including GM4VFL/P on 2m FM who was the only station to respond to my CQs.
20m then gave me 4 more S2S before I tried 17m again, where I found Ron, ZL4RMF with a booming 59 signal. He was working GI and GM and eventually picked me up and gave me 56 - my first ZL on a SOTA activation woop woop! A spot then brought a short run of EU, including Mike MM7MWL who was probably the closest contact of the day at ~ 20 miles and Manuel EA2DT for our 2nd QSO of the day.
At 1000z I had a pre-arranged 2m FM QSO with Fraser, MM0EFI/M, to give him a Complete.
Shortly after finishing with Fraser, I had the most difficult S2S of the day with CT9/OE5JKL/P, with 20m QSB causing problems.
At 1030z I put up a 10m delta loop - lots of EU beacons audible plus the usual burbling on the FT8 channel, but not much else. I had one QSO with F5TRV/M but no response to a spot and 5 minutes of CQs. Come on guys - the band was open!
With some showers passing through, I had a final 3 EU QSOs on 17m, one of whom was Dinos SV3IEG, my 17m regular, and then packed up just before 1100z, which coincided with the arrival of the first and only hill-walkers of the day.

92 QSOs for the day, with 18 S2S and well pleased with the VK and ZL contacts. I just didn’t need to have got up at 0500 local. Hey ho. Next time I’ll wait until the SFI is over 150 before trying another dawn start. Thanks to all, especially the other activators - it was nice to get the TM2IF guys in the log several times. 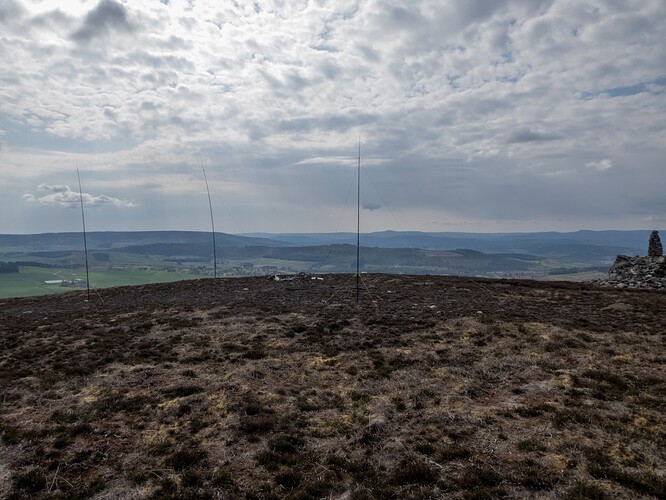 my first ZL on a SOTA activation

Good work on the ZL Simon. Heard that QSO in the shack here. Excellent.
Delighted to follow him and win the coveted “shortest distance QSO of the day” award…!

Yes, it was between you and Fraser, who was at Mugiemoss, but I think you got it by a whisker

I think you got it by a whisker