Planning
I’d been eyeing this one up for a while. It’s kind of in the middle of nowhere. Various books and websites suggest an approach from the Blair Atholl side, but I really didn’t fancy (or have time for) the long drive round to the west.

Then I found Andy’s excellent report.

After a week of excess at Friedrichshafen it was time for a good walk. The WX Saturday was top notch and Sunday was forecast as another cracking day. I’ve been doing SOTA for a few years now and I’ve noticed that I’ve developed a bit more stamina such that I can attempt longer walks now and when I started I’ve have found them impossible. Not bad when you consider I’m fighting 35 years of lethargy and diabetic complications. So Ben Vuirich was the target. As it’s over 900m it’s worth 6 points, b…

He must have had ione of those rare Scottish hill days where everything comes together to make an amazing day.

Setting off at 0910h and following the road through the estate towards the big house, I found a rough track that would avoid me tramping through their front garden. I then picked up the main track again and followed this over moors, eventually leading to a day bothy. I only got lost once, when I failed to see a left fork in the track. 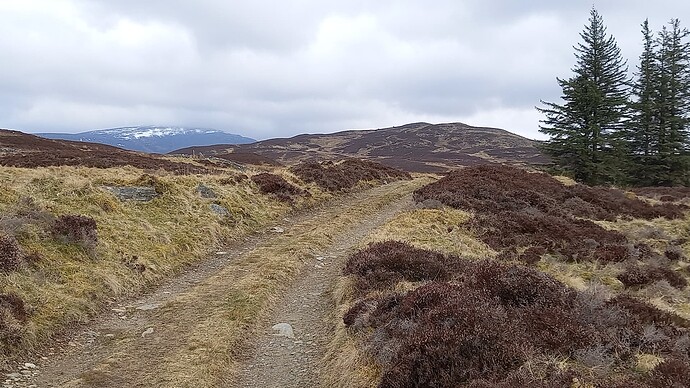 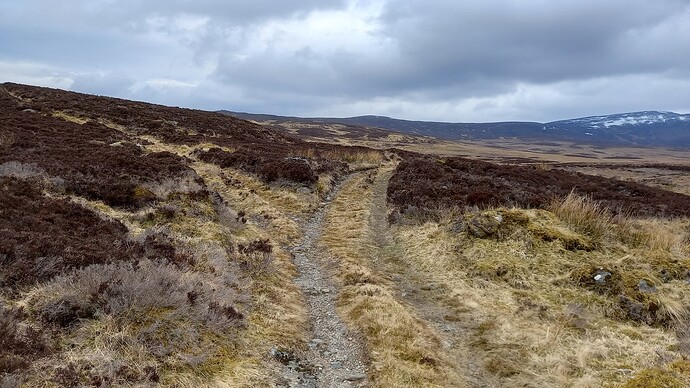 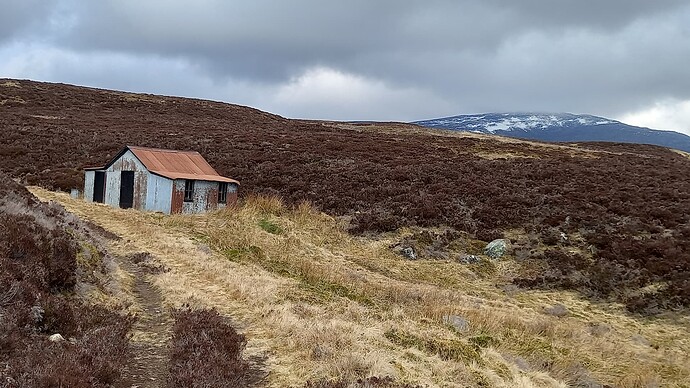 After the iron shed, the track was less distinct and I lost in in a few places. Heather, grass and some quite dry peat hags followed, surprisingly dry,
despite recent wet weather and a thaw. After climbing over and around a few bumps I finally saw Ben Vuirich, eventually reaching the summit at 1105, the hike having taken almost 2 hours. 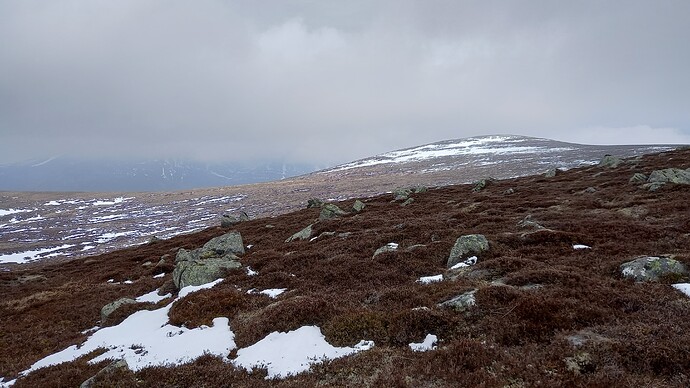 Ben Vuirich is a bit of a rounded lump, but Oh the views!! They are amazing. Wish I’d kept this one for a better day.

The wind that had been pushing me along now bacame an issue! Probably a steady 35mph/50kph, from the SE and quite chilly. Thankfully there was a summit shelter. Unfortunately the only snow on the summit was inside it! 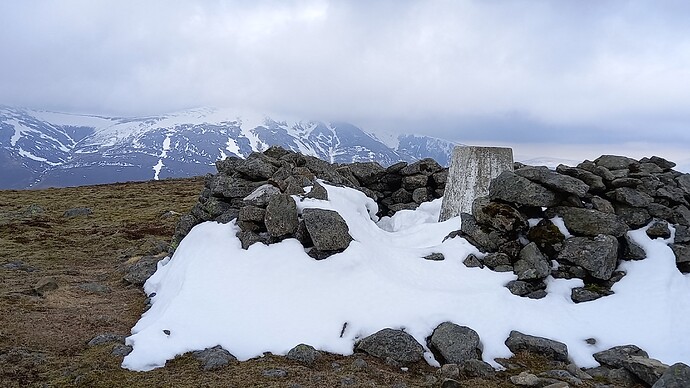 Activation
I was trying some new stuff. Stuff I’d meant to try in my garden…Oh well…

I’d organised my radio kit a bit better into a small case. I felt it was time I started looking after the KX2 a bit more. It has a hard life with me. 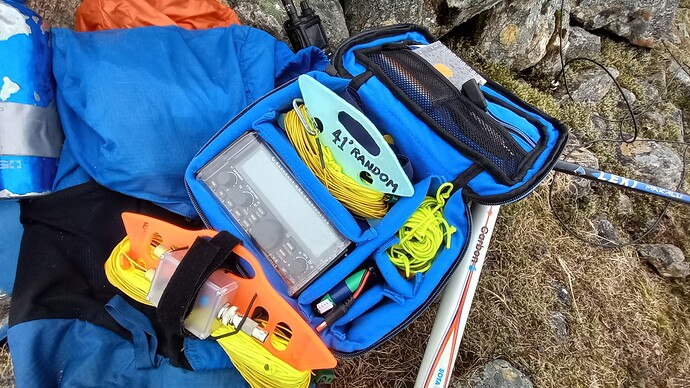 I also wanted to see how the sotabeams carbon 6 pole fared in bad weather. I rigged it using a single guy near the top and then backed this up with three guys only 1m off the ground. I’d brought an EFHW 40, 20, 15, 10m wire with me and this was strung from the top of a walking pole across the mast and down to the ground on the far side. 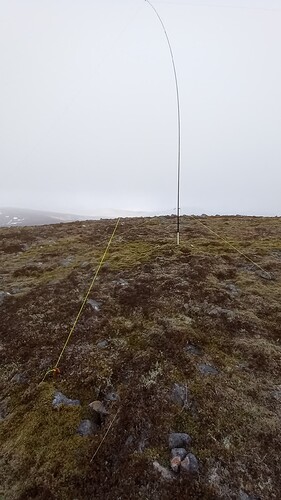 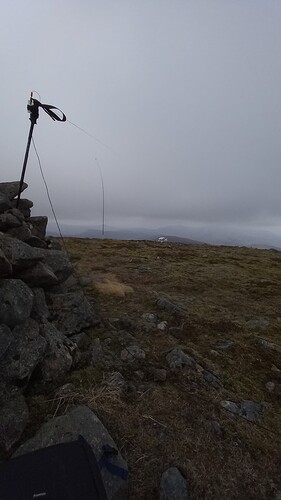 I sat at the northern outer side of the shelter with the KX2 on my lap, it connected to the feedpoint with a freshly crimped 5m length of RG-174.

I really wasn’t sure what to expect from the HF bands today as there has been a lot of solar activity. Expectations were low.

My view was entirely taken up by Beinn a’Ghlo. Like a wide-screen TV just a metre from my eyes. It reminded me of my activation of its’ three tops late last year, when band conditions were poor and I was lucky to get four or five QSO’s on each summit. As I wasn’t due on air until 1130, I grabbed some food, soaked up the ever changing view, before finally keying the mic. at exactly 1130, which felt rather planned and organised for a change. 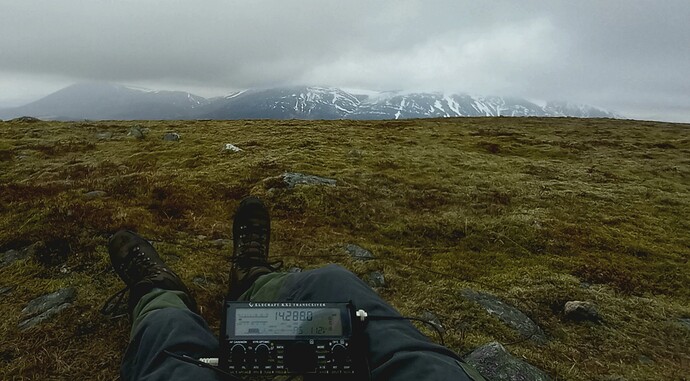 I needn’t have worried about conditions. 40m SSB brought a raft of stations, from just up the road to Spain and Norway. All the usuals featured, plus a few new ones. Caught a few Reflector Regulars too. Thanks Chaps!

Some QSB at times, but nothing major. I then switched to 20m, thankful that I didn’t need to venture out into the wind to unlink anything. Instant pileup, subsiding quickly and another handful of stations in the log (which was VK Porta-log today). 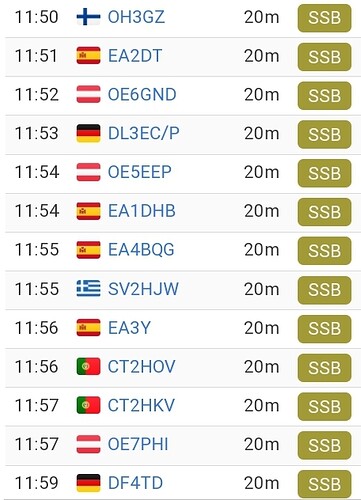 Throughout, I used the mic. in my gloved right hand, keeping my ungloved left hand in a cosy down pocket, only removing it to enter the log in my phone. 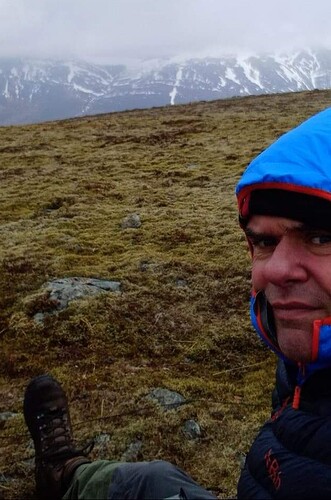 I was getting rather cold now, so resisted the temptation to try any higher bands. Dismantling the station took longer than erecting it had, the biting cold getting to me today.

I was eventually off of the summit at 1225, back at the shed an hour after that and back at the car 30 mins later. Initially I’d done a better job of keeping to the faint track on the decent, but soon lost it again. Anyway, heather bashing is always much easier on the downhill.

I got back to Ballater at 1500 and wasn’t due to collect Mo from work until 1600, which is why I’ve had time to grab a coffee, a cake and type this report on my phone for you lovely people.

11 years has taken its toll on the white paint on the trig! 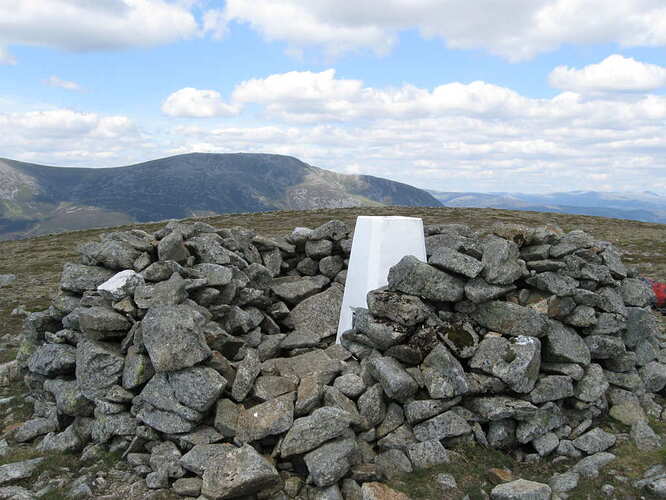 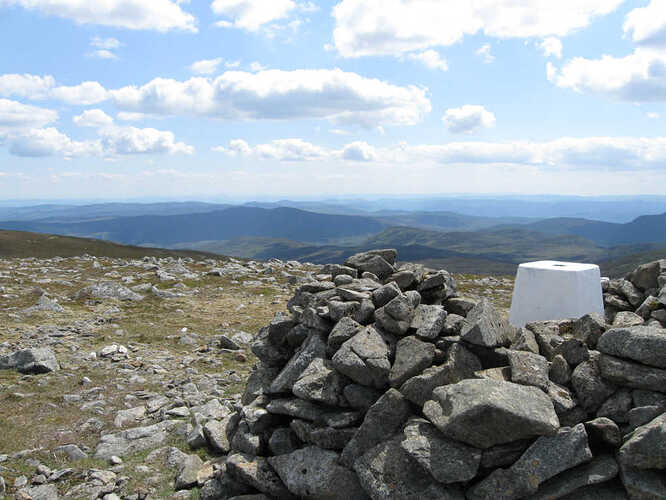 here everything comes together to make an amazing day.

It was good. Looking at who has done this quite remote summit, the only call that looks out of place is mine! Everyone else isn’t carrying a load of extra lard the way I am

Shame you didn’t have better weather because the views are good. 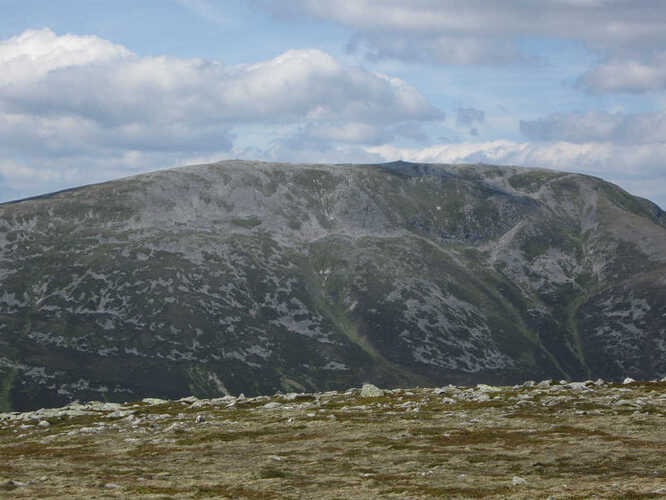 The track looks much more overgrown than I remember. But it was so long ago I had pigment in my hair and beard then! It’s a good walk because whilst it goes on I don’t recall it being terribly strenuous. Or maybe I was fitter then.

I’m glad to see your old pictures. The old reflector didn’t show any.

Looking at who has done this quite remote summit…

Not many have. I’m the sixth. We’re in exclusive company! I’d go up there again any day rather than cross the main road and climb Blath Bhalg GM/CS-094 again. That was horrific!

It’s the kind of place you activate just to get the tick in the box and that’s all.

Another enjoyable activation report Fraser. Many thanks. Good to work you this morning despite band conditions being a bit temperamental today.
I actually ”retired” from hillwalking permanently after a memorably bad day on neighbouring Beinn a Ghlo a few years back. So bad that not even a fish supper in Pitlochry could revive me. Thankfully, my “retiral” lasted only a week……!

after a memorably bad day on neighbouring Beinn a Ghlo

I love Beinn a’Ghlo! Been up twice recently. Last November was memorable. I only just got away with it!

The chipper in Pitlochry is excellent. One of their white pudding suppers would cure anything.

Well done and good day out Fraser. I can imagine it was chilly today. I didnt recognise the old hut, I went by bike up Glen Fernate on the east side. Then left bike and went up to summit due west. Margaret & I cycled further up the same track last year to do Carn an Righ GM/CS-020, its quite a workout and goes up to about 650m before dropping towards Fealar Lodge. That must be the most remote dwelling in Scotland, an hour in 4x4 to get to public road! 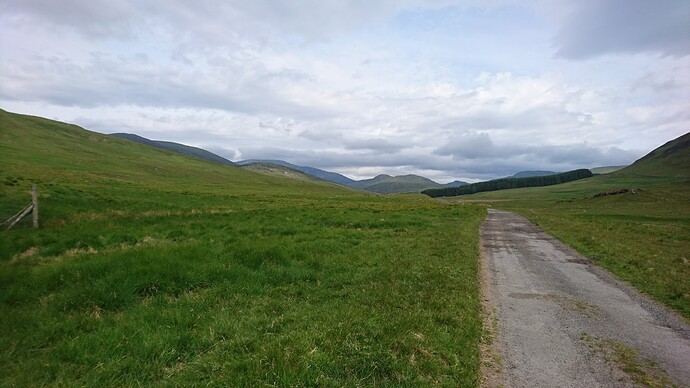 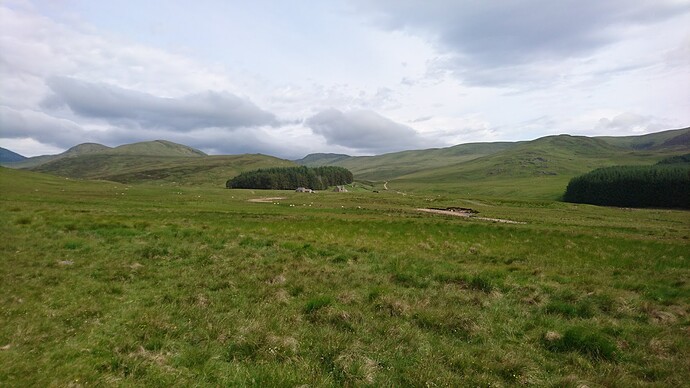 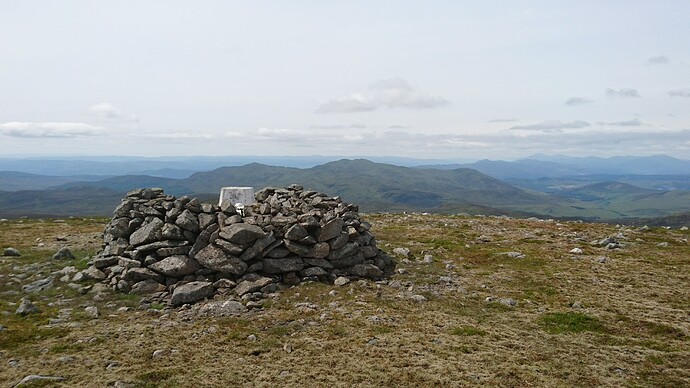 I use the Carbon 6 and only use the mini pole stake kit. Hasn’t failed me so far including one 50kt windy night at the end of Mull of Kintyre. Great report.

Hi Fraser, another great activation report with photos. Thanks and well done.
Cheers to you

by bike up Glen Fernate on the east side

I did contemplate that Gavin. In the end, the chance to take Mo’s VW Polo gti over Glenshee won out! It’s quite new and I’m not yet at the stage of chucking a bike in the back. I could have taken the Landie, but diesel in Ballater is £1.75/l at the moment…

Last year my son and I climbed that along with Glas Tulaichean GM/CS-011 from the Spittal of Glenshee in what was a brilliant but long day out. I have been looking at ways to get back to Carn an Righ without going over the same ground, so thanks for that.

The cheap diesel is £1.72/l in Edinburgh. Surprisingly cheap up Ballater way for a rural location.

Nice to have a QSO with you again Allen. First one in a while and due to a short skip on 40m, no doubt.

Many thanks for the contact on 40m Fraser and the rather excellent report. A two hour walk in… for me that’s three hours, so I’ve got my work cut out to get my Complete on this one.

I’m thinking more and more that I do overegg my activations with 2m and HF linear amps on board, plus the sppropriate antennas. I suppose that comes from activating all those wussy summits south of the Glasgow-Edinburgh line.

Well I think you’d manage Ben Vuirich as a 2m only activation if that helps!

As for the hike, it’s a 10 mile round trip but unfortunately some pathless bits, however never really steep. I reckon you should get your name on the short list of activators.

Maybe not one for Trans-Atlantic day though.

Conditions down here are terrible Fraser. I was amazed that I couldn’t hear you on 40m today.but I will keep trying.
Best 73

As for the hike, it’s a 10 mile round trip but unfortunately some pathless bits…

Sounds like all that “training” in Galloway will stand me in good stead.

… but only 6 points for a 10 mile tussock hop, well I’ll have to give it some thought.

The views Gerald, the views. Points are worthless to MGs.