I spent the night in Tyndrum. The place with the Green Welly Shop !! https://www.thegreenwellystop.co.uk Great place, but boy is it noisy if you overnight in a camper. It must have the noisiest 3 or 4 acres of gravel parking in the UK. So after smiling at the gold panning equipment - surely a bit of a joke - I spent the night parked up at the railway station.

The trains weren’t running due to the staff strike. I used my solar shower to get my first decent wash/shower upon arrival in bonnie Scotland. And settled down for a bit of peace and quiet. Around 10pm a one year old Audi turned up. The occupant proceeded to pull on a wealth of high-vis clothing, boots and helmet. I couldn’t resist asking him his intentions.
“I’m making an assessment as to the track safety”, he told me.
“But the trains aren’t running are they?”, I asked. “No, but we still have to do one”, he said, so I left him to his work. No more than 5 minutes later he returned, took his gear off, but not before I asked him where his home was. “Glasgow”, !!!

This was going to be an easy day out. Follow the West Highland Way and turn right up the first burn. There were quite a few fellow walkers on the path, most carrying large rucksacks, some larger than others. I was somewhat perplexed though when I saw two lads veer off the path, one was pulling what I can only describe as a large loaded shopping trolly. Where and what they were doing I only discovered on my return**.

It was only after a rather longer walk than anticipated did I realise that I’d almost reached Auch Gleann a mile and half beyond where I intended to go. After several explitives, I decided that my only real option, other than turn back to my original planned route was to carry on a little and climb up the steep NW shoulder of Beinn Odhar. Luckily there was a bridge giving access (even if there wasn’t at least I was safe in the knowledge that no trains were running and the track was safe.

Yes it was steep. But the wx was kind and I arrived some 45 minutes after my alert time.

I found a comfortable operating QTH, by re-arranging a few stones, changed my battery which had served well on seven activations so far (a 3amp Li-on) 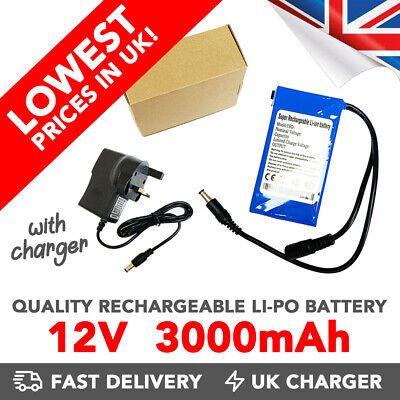 Opening up on 14mhz at 1346GMT (UTC if you wish!!) Chris F4WBN, Jack OH3GZ, Jose EA7GV & Manuel EA2DT were on me in an instant. EA2DT’s morse is so recognisable that I have no trouble digging him out of the deepest of QSB or QRM. I only need one letter and one space - no one sends their callsign like he does.

The only couple I saw kindly took this photo of me operating and spent several minutes chatting. The only people I saw on the hill that day and the only photo I have of me on the hill doing SoTA. 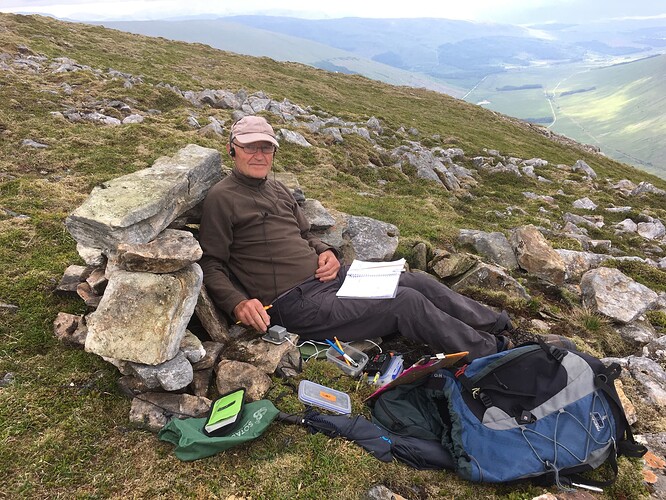 The way back to Tyndrum 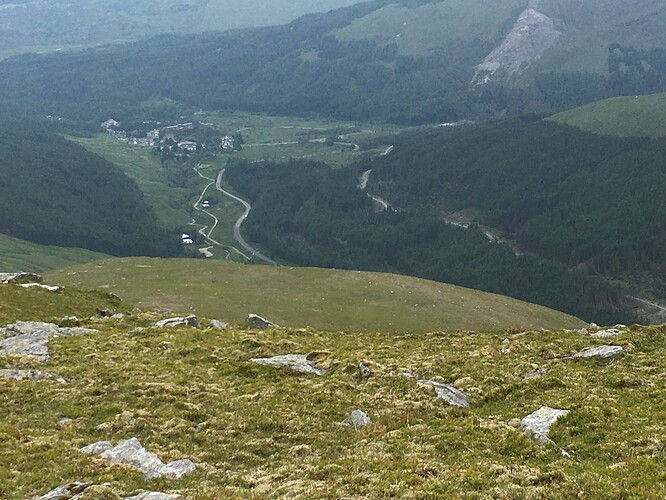 ** And what of those two lads I saw, one of which was pulling loaded shopping trolley?
I discovered them panning for gold in the burn which flows through the village. I wonder if ??? Well, the village shop certainly sells the gear - and there’s a ‘new’ gold mine in them thar hills.

Yes it was steep

It’s steep the other way. In fact it’s steep all ways. But it’s a belter of a hill with some fab views if you had the WX.

Green Welly is good, but best tea and most amazing Fish and Chips are found across the road in The Real Food Cafe.

and there’s a ‘new’ gold mine in them thar hills

They’ve been mining for a long time here. They used to mine Lead. Gold and Silver are found near Lead in trace amounts but there’s quite a bit of Gold and Silver here. Just needs Gold to be suitable expensive to justfy extracting it. You can see the Lead mine spoil in your last photo at right of centre at the top. The rock contains trace amounts of Lead (and probably Lead’s close friend Arsenic) such that that spoil is void of any grass/plants despite having been untouched for a very. very long time.

Is how I hear him. Other ears may hear something else but it is unique.

You can see the Lead mine spoil in your last photo at right of centre at the top. The rock contains trace amounts of Lead (and probably Lead’s close friend Arsenic) such that that spoil is void of any grass/plants despite having been untouched for a very. very long time.

I remember one hot summers day abandoning thoughts of Beinn Laoigh and exploring the surface workings - we knew of the deep shaft so didn’t go very far into the adit. There was large amounts of galena still there, perhaps economically recoverable with modern gear, and traces of other minerals, I filled a pocket of the rucksack! In those days the forest on that side of the road had not been planted, the following year we followed the track from Tyndrum to join the Coninish track and found it impassable due to deep - very deep - ploughing, so back to the mine and Meall Odhar!

Must have been late 70s early 80s Brian. At least 40 years ago. Tempus fugit

I think probably mid 70’s, Andy. Those trees are probably mature now, its an eery feeling remembering the heathery moorland that preceded them…