Another excellent WX forecast, better make best use of it. I was planning on Glas Maol or Carn a’Gheoidh but there were plenty of ski runs open and the WX was good. The A93 would be a nightmare, the car parks would be full and there would be loads of people. What else is near and easy and has a bit of height? Why Ben Ledi and I’ve not been up it for 4 years. Yes, it would be busy but it’s a short drive (about 1hr).

WX said -6C in the glens overnight and Ben Ledi is 879m so it will be hard frozen. There was plenty of snow in some of Fraser’s recent photos and on the Glenshee skicam so I thought I’d better break out the crampons and ice-axe. I didn’t think I would need the ice-axe for an arrest but for hammering tent pegs etc. I wasn’t sure about the crampons. By heck they’re heavy. I don’t use them much so I should have bought the aluminium ones, they don’t last so long but weigh about a 3rd of the steel ones. In the end I didn’t need them but had I been a few hours earlier, I think they would have been needed.

First problem on arriving was the normal car park had cars coming out. Ha! No space. Ever the optimist I drove down and there were two snug spaces. I parallel parked in the easy one but didn’t like it, too much of the side was exposed to people unable to reverse out of their spaces. A very nice man offered some extra reversing help along with the parking sensors and I parked in a huge puddle. Job done. Bag packed, one fleece on, one carried, Down jacket and crampons and ice-axe. Gordon Bennett that bag was a weight.

There’s a brilliant path lower down and a fine path nearer the top. That’s when I remembered there’s no warm up. It’s a bit brutal, 725m ascent in 3.7km which is about 200m per km so it’s quite steep and unrelenting. Funny how I had forgotten this. My legs did object on the way up as I’m not hill fit and boy did they object on the way down. The computer says 1hr55 and it took me 2hr05 so just about acceptable.

10mins climbing and this is the view over Loch Lubnaig. You’ll never tire of seeing that! 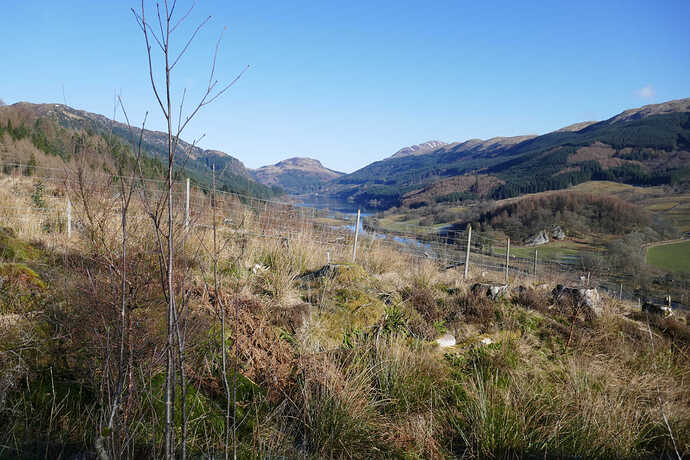 Also you can see just how much climbing there is, the summit is the snow capped slope at the right of centre. You can see the excellent path. 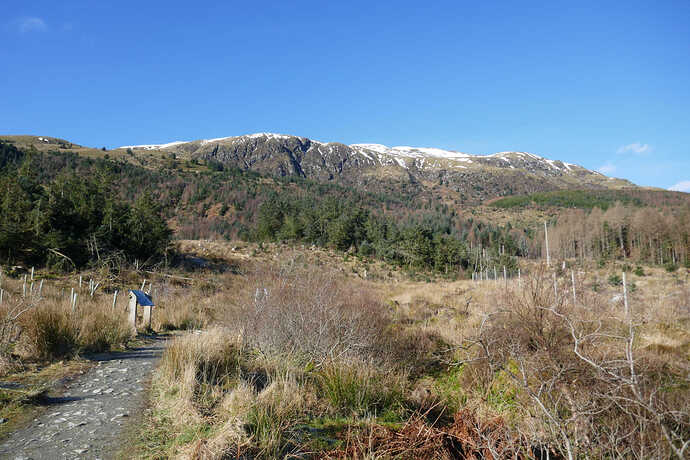 From here it’s just a never ending thigh bursting slog. It was warm and hardly any breeze which meant I was sweaty and puffing a lot. Still the views as you climb and in the woods are simply excellent. Fair payback for the effort. After a while the path does a 180 bend and that’s when the first snow patches appeared. The snow was well consolidated underneath with about 2in of soft snow on top. Some of the patches were steep but not too hard to climb. Crampons? No as even if you slid down you would stop and there was nowhere to fall off.

Ben Venue GM/SS-058 becomes visible after the 180 bend. I still have to do this one. 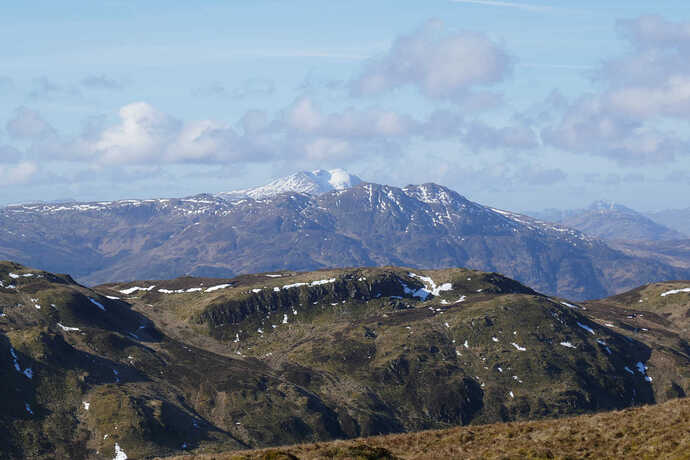 Well the last snow patch was a on the verge of needing crampons but I got up steadily and finally I got out on top. There had been enough people up already to have made plenty of steps to use but it was close to needing them. Early in the morning before the top started melting they would have been essential. Of course this is not a hill for solitude, 27 people were on the summit when I arrived

But it’s an hour from Glasgow / Edinburgh and it was a stonking day so what did I expect? Well more people to be honest!

The ground was like concrete… ah the iceaxe maybe needed. But there was just a gentle breeze so I set up the antenna on a big snow patch where I could push the pegs into the snow/ice. I could squeeze the 30/20/17 dipole in but the 60/40/30 would probably not fit on the patch. So higher bands today.

Antenna on the ice/snow. Just as well hardly any wind as the pegs were not a good grip. Hey where are the people? They’re there, trust me. 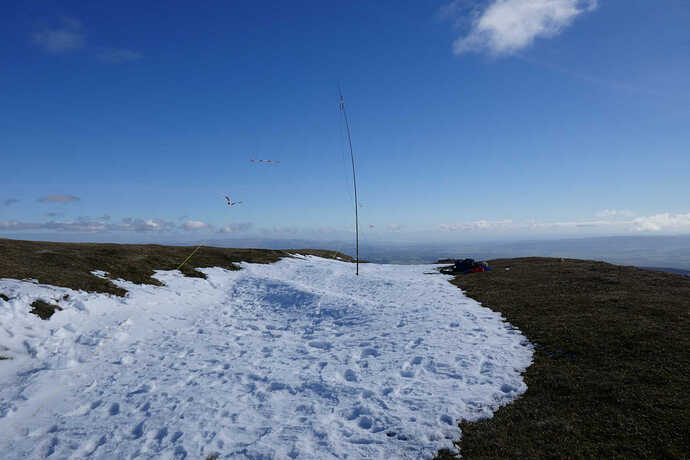 30m first, nice and steady, 10 QSOs in 15mins including PA, F, DL, EA, SM, OE & ON. After that it was 20m where there were 12 in 20mins. I had to re-rig the antenna during this. I was called by S57S which took me 2 attempts to decode. He must be used to people having issues with all the dots but it has quite a nice rhythm to it. However, I dropped the pencil and then had to fend off a big black Labrador who could smell my Toffee Crisp and came to steal it. Alex S57S must have thought he had a right goon as his QSO partner and slowed down to 10-12wpm which shows him to be a smart operator. But I had got the characters out of all the dots and if I wasn’t fighting off a dog and looking for the pencil would have responded quick. Countries worked included UR, OK, HB9, OH, S5, EA & SP.

After that I checked SOTAwatch and saw Simon GM4JXP spotted on 18MHz. I could hear chasers and could tell he was there but not strong enough for a QSO. Shame as it would have been a nice complete. I spotted and tried 18MHz SSB but my quiet frequency was busy as my few callers told me of bad QRM. Still HA7WA and OE6GND were completed. Then CW and SQ9OZM/P for an S2S and David CT1DRB.

I thought I’d have a listen and shout on 2m FM and on turning on the handy heard Jim MM0GLM and Jack GM4COX in QSO. Jim was on a HEMA summit and Jack was 59+++, he wanted to know why no 13cms. Well not with the crampon and iceaxe weight! Gavin GM0GAV/P appeared for a complete on GM/SS-019 and then in looking for a clear frequency for a 2M caller found MM7RXH in GM/SI-007. IN the end 6 worked on 2m.

Pack up, more photos and the grind down as my thighs complained non-stop. 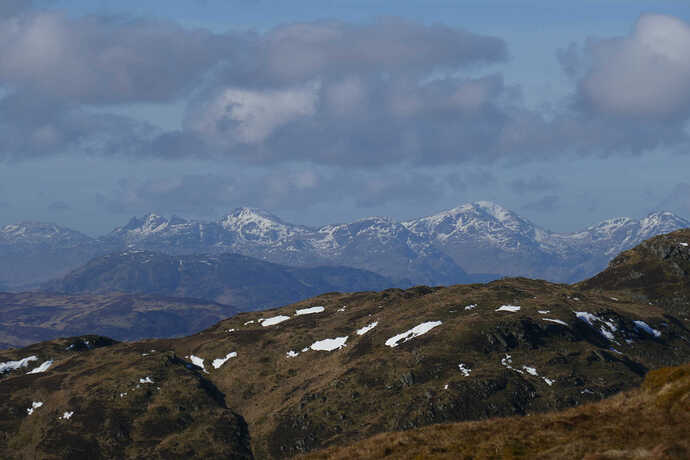 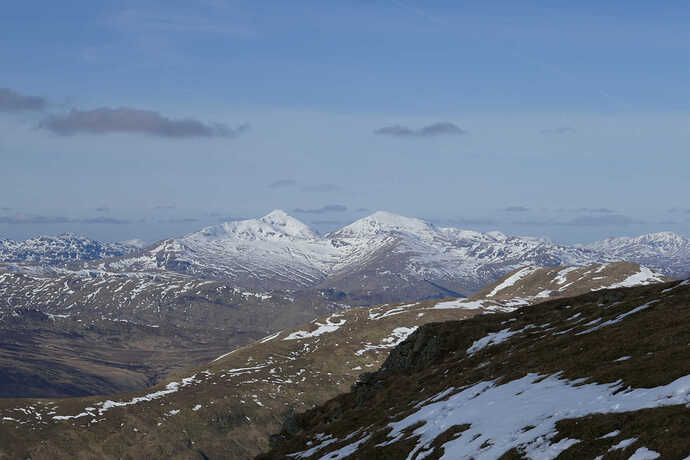 Arrochar Alps, Crianlarich Hills and Breadalbane hills and some of the people. 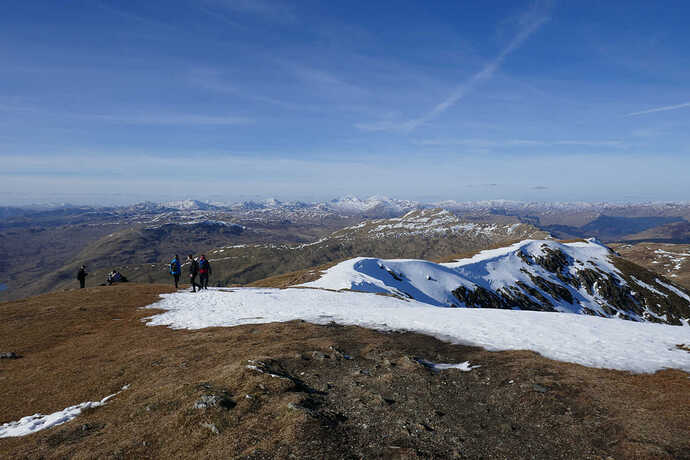 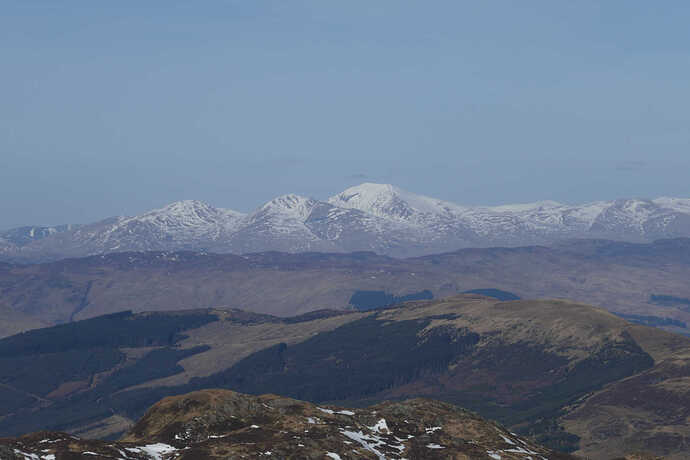 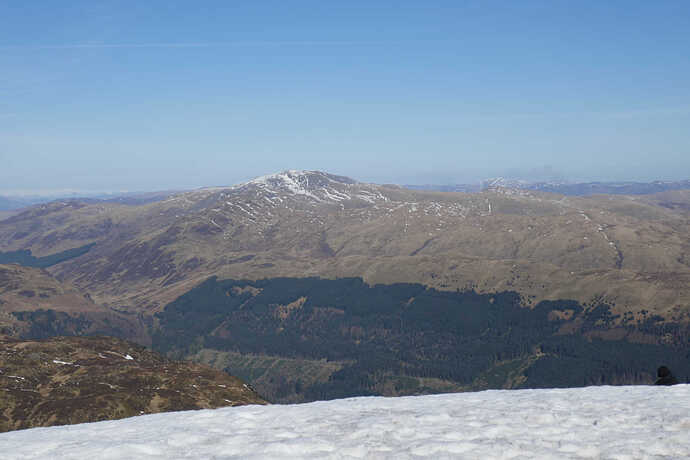 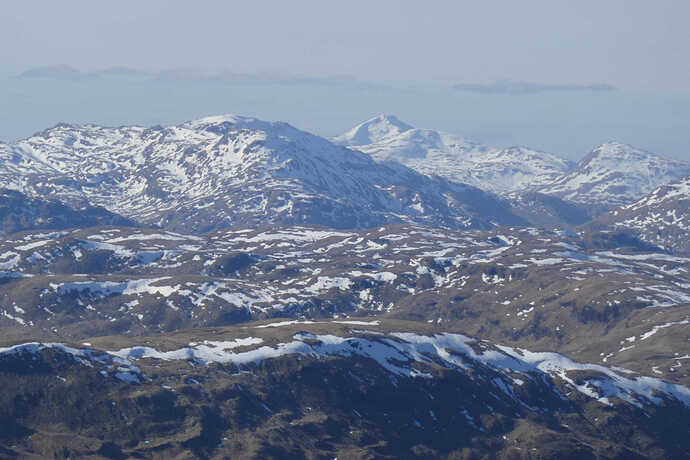 Finally panoramas. I didn’t realise the camera had hiccoughed on the first shot

So a long descent in a strengthening and cooling wind back to the car where some diet Red Bull tried to give me wings. I should have worn the crampons at least once since I carried them all the way there and back ! But a good workout and nice views. But boy, oh boy is this a busy hill.

Hi Andy, thanks for your great activation report and photos. Well done

… it took me 2hr05 so just about acceptable

Well that’s very acceptable. Paul and I took 2hr25, though we did suffer a bit from overheating on the lower part and the complete opposite once we had rounded the bend in the path and exposed outselves to the wind. As you say, a very popular hill, so time was required for some social exchanges, going both up and down… and dogs - I had at least three invade my personal space during the activation.

Thanks for another great report. Memory banks suitably refreshed.

There wasn’t much of the white stuff back in 2019, so perhaps we are starting to have winters once again.