Fraser, MM0EFI, suggested we do a joint activation (our first, btw) on Ben Gulabin (4 points) as it had a decent access track that wouldn’t put too much strain on our injured legs - his ankle, my knee. We arranged to meet at the parking area beside the A93 just North of Spittal of Glenshee at 1045 local.

Just to note that for anyone travelling in this area this week, the A93 will be closed at Braemar from 17th May for about 3 days for water supply works, requiring a huge diversion to get to either side.

I left Aboyne in bright sunshine which unfortunately disappeared around Braemar and we had grey skies with a strong breeze pretty much all afternoon.
Route up

Parking area from Google Maps - the black sign carries a warning to stay on the track because of shooting - out of season now, so the estate probably just leaves the sign up all year. 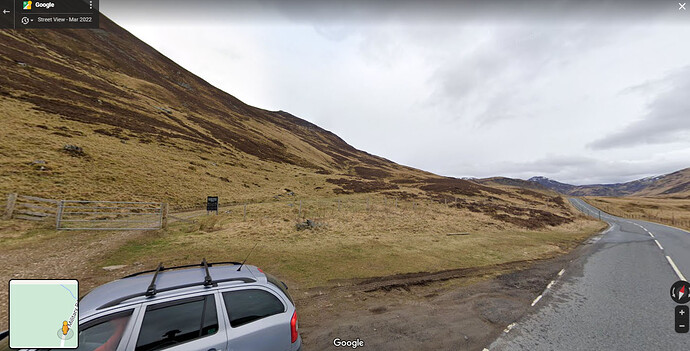 parking-from Google Maps1420×724 155 KB
Its a good landrover track round the base of the hill until the path up forks left and gets much steeper with some boggy bits and loose stones under foot. It took us just over a hour to get to the top.

Activation
As Fraser was starting on 2m, I set up on 40m with a Sotabeams linked dipole and on 17m with a delta loop. I’d also brought a new 5el 2m yagi to try later.
Unfortunately the O2 network signal was very patchy, so I had to wander around a bit before I could send a spot and I was unable to view the Sotawatch page, which was annoying.
40m seemed strangely quiet and a spot brought just 7 chasers, all from the UK. I couldn’t hear any EU stations.
Switching to 17m I heard a faint JA6 calling CQ, so the band was open. A spot brought a run of 16, all EU, including SV3IEG Dinos and a S2S with TM15SOTA on F/AM-472.
I checked 15m but could only hear a few Russians calling CQ Contest. 10 and 12m seemed dead.
After wandering over for a chat with Fraser, I set up on 2m SSB with the new yagi but a spot and 5 minutes of CQ on both the spot freq and 144.3 brought nothing.

I then set up on 20m with a delta loop and a version of the 20m vertical+counterpoise that Fraser uses regularly, as I wanted to try some comparisons.
20m was a bit strange as well. Very short skip within the UK, with G3VXJ first in the log with a 59/58 exchange on the loop and a 56 for the vertical. I then had a run of 35, mostly on the loop, all EU with best DX CT3KN. GM0VMV in Edinburgh gave me a 52 for the loop and 51 for the vertical. The run included 4 S2S and M0JUA running 3w from Warminster. The only US stations I could hear were down in the noise seemingly running a local net on my freq, so we weren’t bothering each other. I don’t think this was an ideal day to try comparing the loop and vertical as propagation conditions seemed so disturbed. I will try again on my next hill.
With the wind freshening all the time, Fraser and I decided we’d had enough - so we started to pack up. Fraser then had a text from Hibby MM0RFN up on Hill of Fare GM/ES-070, so I tried calling him on 2m FM with Fraser holding the beam but nothing heard at either end. Looking at the topo profile for the path, that is not too surprising, I guess: 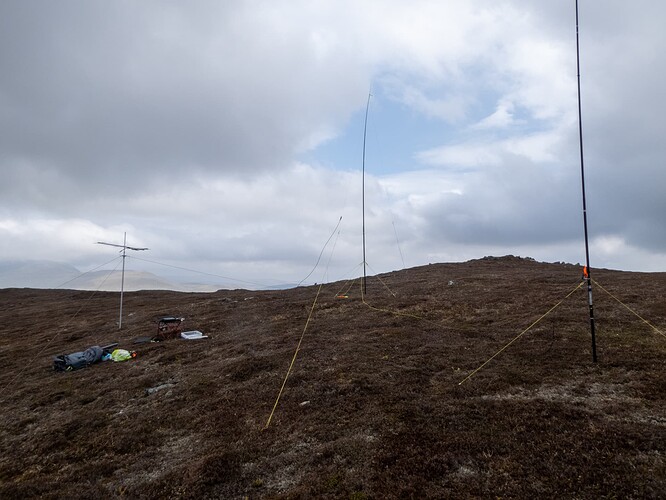 Fraser in the distance: 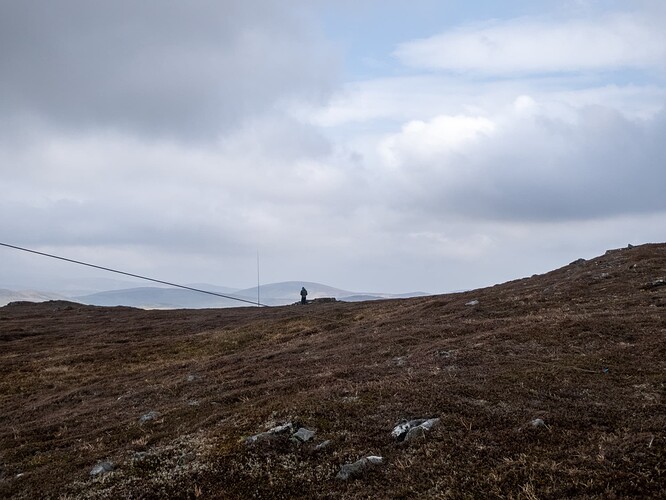 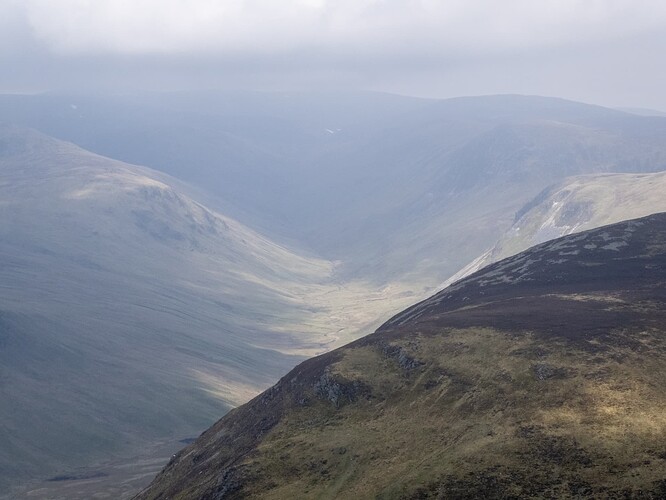 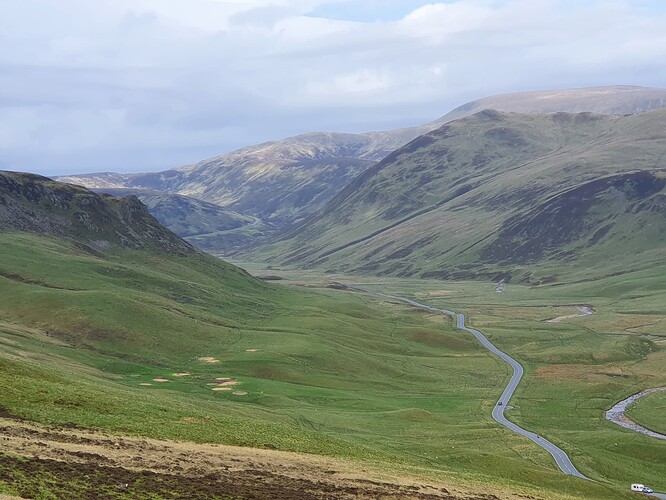 59 QSOs for the day, including 5 S2S.
Thanks to Fraser for excellent companionship and banter and to all chasers and activators on the day.

Great to work you on this one Simon… a potential Complete in the making.

It was great to finally get up on a hill with Simon, especially as we live just 8 miles apart. 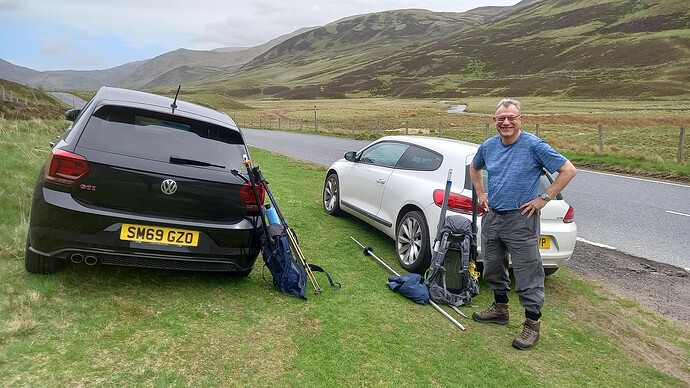 To the casual on-looker it may look like we weren’t talking to one another! It was windy on top, so I chose to operate below a small rocky step, with my 2m high mast and 144Mhz yagi perched on top. 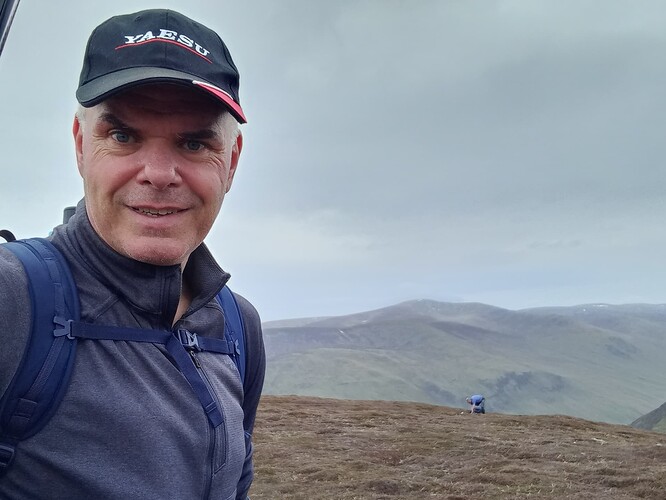 2m SSB was quiet, with just the two QSO’s into Edinburgh. I had a bit more luck on 2m FM, with Edinburgh again and Glasgow stations making it into the log. Total count was six. 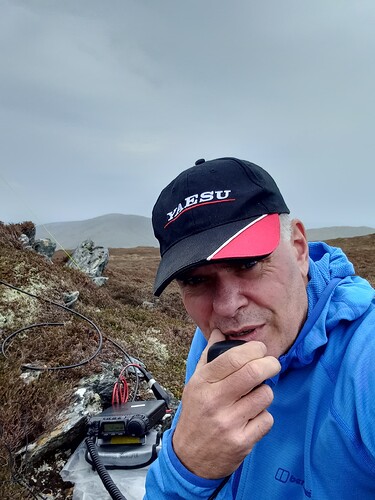 I then put up my 10m vertical. Two reasons - one was to test it’s survivability in the wind (the radials are also the guys) and also to see if I could at least make a couple of 10m QSO’s, either SSB or FT-8.

The band was quiet across the SSB section, however FT-8 was alive. However, I had an issue. I hadn’t used my FT-8 kit in the field for a good 10 months and I was a little slow in setting it up and cobbling it all together. I had to change several settings on the radio too and I neglected to notice that the CAT/TUNER/LINEAR option in the menu was set to TUNER, which meant that the software couldn’t see the radio. By the time I’d got all of that sorted out and got the soundcard audio levels set, I’d all but missed the boat. I very quickly got a Spanish station in the log and that was all. 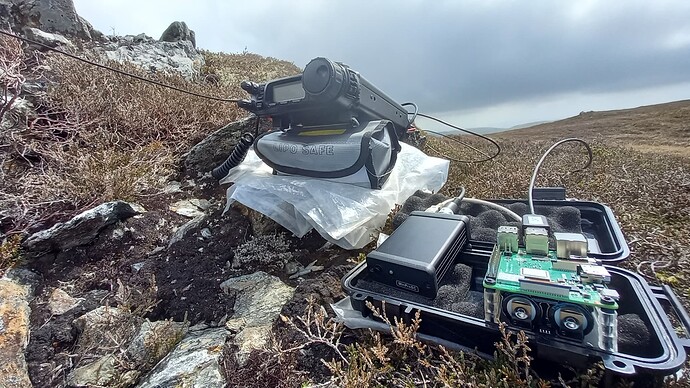 After chatting with Simon and hearing that 40m was flat and 20m had QSB, I decided not to bother setting up anything further. 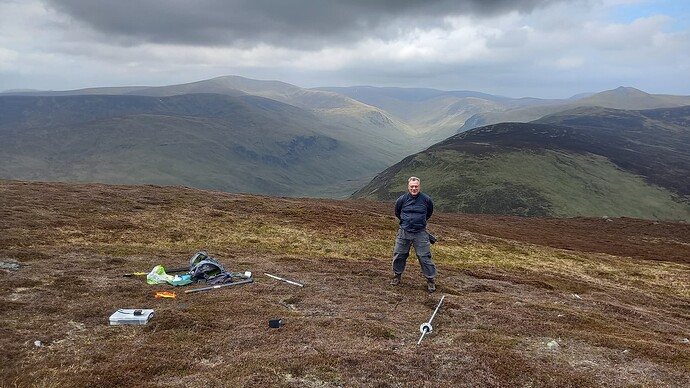 Not the most dramatic day radio wise, however it was great to get out for a hike with Simon and witness his impressive antenna farm in action. My ankle survived and so did Simons knee…

I loved the GTis I had in earlier days before family came along. Then with kids grown and flown I jumped at the Roc for something a bit different. Probably one of the few times I’ve agreed with an opinion from Jeremy Clarkson

After chatting with Simon and hearing that 40m was flat and 20m had QSB, I decided not to bother setting up anything further

Although I had worked Simon on 40m, I couldn’t resist having a listen on 2m SSB and 10m FT8 for you, but as expected nothing was heard.

Maybe the starter for more?

I’m sure we’ll have another one soon.

Shame we didn’t manage to work on 2m - I heard Simon on 20m as I was setting up but he was busy mid QSO. My day on 20 was much more successful, I’ve been promising myself I’ll write it up for a couple of days now, but things keep getting in the way!

Due to my newly broken mast from Saturday, I now have some spare fibreglass to make the 100g yagi with… that might help matters!

now have some spare fibreglass to make the 100g yagi

There’s no excuse now! It is a winner.