Hello everyone!
It’s been quite a while since I have been in an area long enough to activate a summit. So, when the opportunity arose this week, I went for it and activated W4C/WP-010 The Pinnacle in North Carolina as VE3YTP/W4. 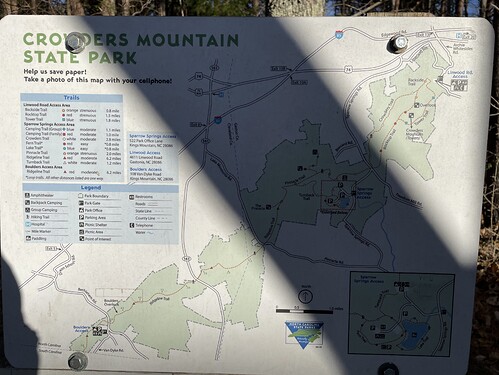 Overall, this is a very easy summit to activate. The trail is well groomed, marked and is only a 2-mile hike. And although the park lists it as a “Strenuous” hike, it is actually quite pleasant. The last 1/2 mile is significantly steeper than the rest of the trail but nothing crazy. As I got closer to the end, I reached a steep stone staircase that had the first posted warning sign. 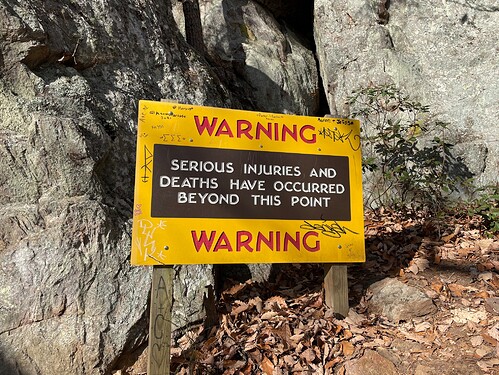 Sign12016×1512 1.69 MB
Serious injuries and deaths may have been caused by hams throwing antennas into trees

After the staircase, I reached a sign that marked the end of the trail, but I found out this not where the peak is. 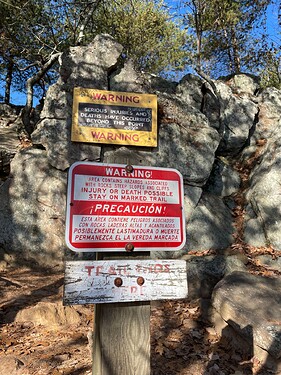 sign21512×2016 1.41 MB
More signs to dissuade you from attempting to bring an indoor hobby outdoors

I had to climb up a couple of rocks and continue up into a small forested area. Here, I was able to get a couple of nice shots before the final ascent on a small plateau. 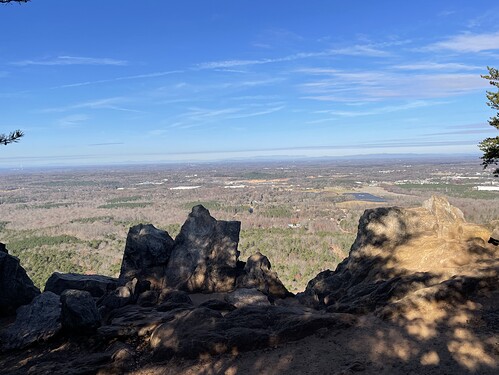 When I reached the peak, I found a metal pipe in a concrete slab and some rock formations that would provide some shelter for the wind. I started to unpack and get my end-fed wire antenna set up and found that I had left my arborist throw-weight several hundred miles away, back in Toronto. I attempted to create one out of rocks that were lying around, but they were not heavy enough to come back down through the trees. Luckily, I brought my Yaesu ATAS-25, so no trees were required. Unfortunately, there’s not a lot of room to spread out ground radials effectively. This makes tuning on 40m difficult, but not impossible (I was able to get an SWR of 1.7:1 across the band, good enough). While I was getting set up for HF, I also started putting out calls occasionally on 2m FM, while beaconing on APRS. Only 1 response on 2m, a nice guy named Al who was about 25 miles away. 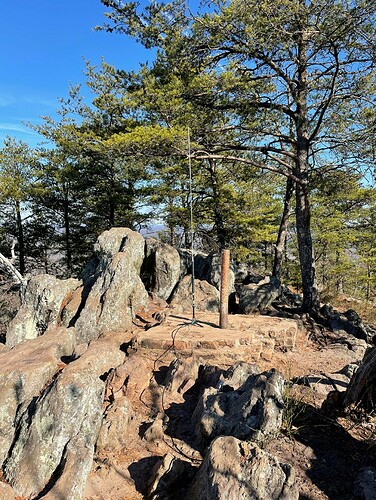 This was going to be my first activation with my new IC-705 and was mainly going to be digital. Previous activations had been done with my trusty FT-818 but now it was the 705’s time to shine. And it did it beautifully. Everything worked the way it was supposed to. My TH-D74A provided a GPS time sync via Bluetooth to my Surface Go, the 705 connected wirelessly without a hitch and the ATAS-25, outside of 40m, gave me an SWR of less than 1.2:1 across 30m and 20m. 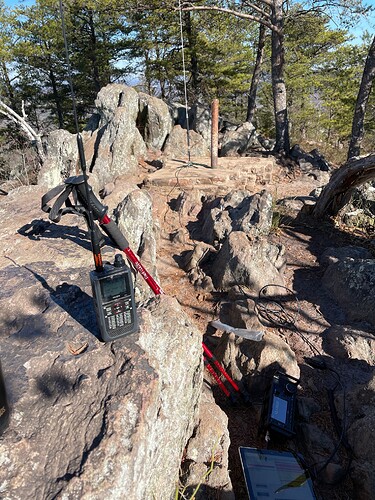 As for actual contacts, I only made 12, but I also wasn’t trying too hard. I knew 40m was going to be a bit of a bust and that 30 and 20 would be better. 30 on this antenna is always good and it showed with several stateside contacts and one from a friend of mine back in Ontario. 20m on FT8 was completely rammed and I ended up finishing the day on 20m FT4 and made some contacts into France and Spain. Overall, a great success.

Maybe they caught their shins on that dangerous looking metal pipe!

Thank for the writeup. Looks like a beautiful spot - up there looking out over flat lands!

Guessing a bit about the height but shins might be the least of your worries.
That looks like a bothersome height if you aren’t watching where you are going.

I would have turned back. Too risky.

Great report and a good effort with the ATAS!

I don’t have my alerts setup to show FT8 modes, maybe I should. I can say that a bunch of SSB W4 SOTA chasers around, more than likely would have gotten a few more contacts that way. Either way looks like you had a good day.

When I saw your spot on 30m I listened to the frequency but it was not the right time for Europe !

Thank you for this QSO, a new unique one.
Hope to see you soon.

My original plan was to do SSB on 40 and 20 but the weather was so nice that I found I just felt like sitting there enjoying the view.

I did attempt a S2S but I couldn’t break through the pile up.

That summit, trail, and signage reminds me of W4V/RA-016 aka Cove Mtn aka Dragon’s Tooth (due to the granite spires at the summit).

I saw the spots, but lacking an antenna for 30m, I was unable to tune in.