Blackpool rally time and this means I get to bag some G summits on my way to and from Blackpool. Better still I get stay with Geoff G6MZX near Skipton and get waited on hand and foot, fed till I’m fit to burst and help Geoff empty his drinks cupboard!

The routine is leave GM early-ish, bag a simple unique on the way down, get to Geoff’'s and relax. Sunday is rally day then I normally aim for a big walk on Monday on the way back. I’ve been rained off one Saturday but I’ve bagged Whitfell, Gummer’s How and now Arnside Knott and every time it’s been a nice warm sunny Spring day. Three simple summits which are so worth doing, not for the points but the sheer delight and beauty of them.

I parked at the NT car park at the end of the rough road for Arnside Knot. I had to take that carefully as I was in my mid-life-crisis sports car that is all vroom and not much ground clearance. From here it’s 15mins +/- to the top. I didn’t even bother with big boots, just a mid height softboot. I did feel overdressed with a big bag but it had HF, VHF, batteries in it and I didn’t know if I would do HF or VHF.

As you leave the car park you find the first surprise on this trivial summit. It’s exceptionally steep at first which is rather rude of it. After not much time your heart will be jumping out of your chest and you get to the viewing station which is not the top.

Looking North over the viaduct. 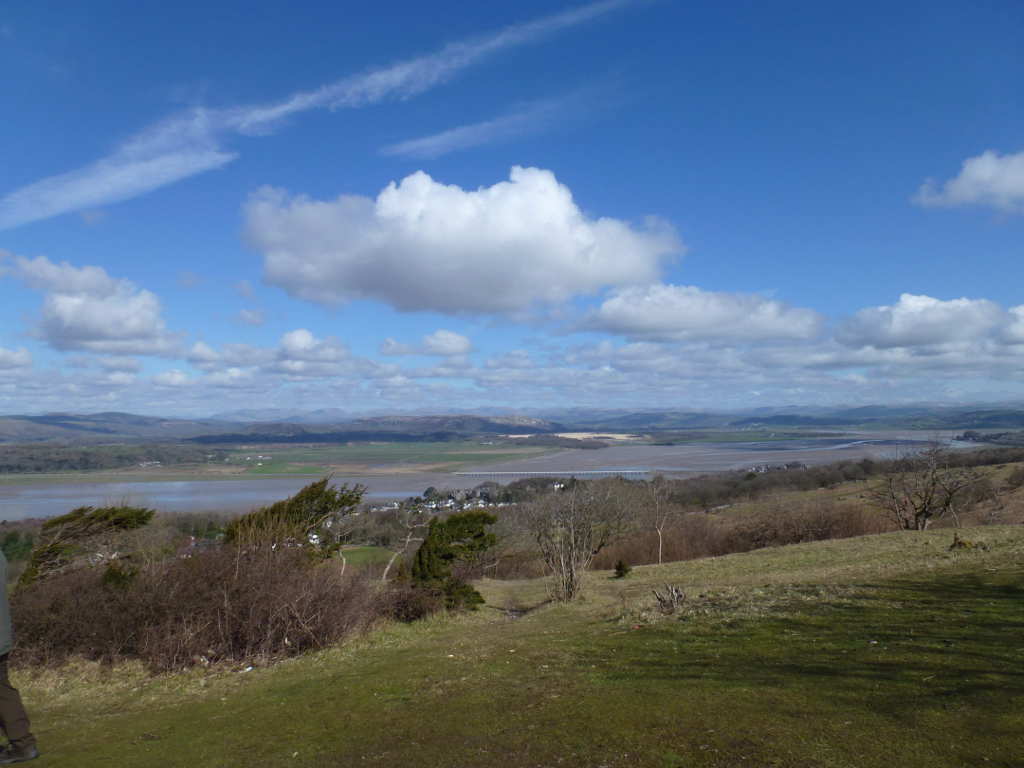 The views are good and it was a nice day. Not too warm but sunny and not windy. It had been cold in GM overnight and the motorway had been salted and gritted making said mid-life-crisis car turn from clean and shiny to mucky and briney! Lots of fresh snow on the Northern Fells but you couldn’t see much of it from so far South.

A quick tramp about the path and I was at the trig. I found somewhere near enough for WAB trig rules and set up a ribbon feeder J-pole for 2m and started with my VX170. It was quieter than I expected but I managed 4 QSOs. Talking later to Rob G4RQJ he wasn’t surprised to hear it was not exactly brimming with 2m QSOs. After that I switched to 40m and that band was not playing too nice for G chasers. I managed 14 QSOs with 1 S2S with Barry G4TOE/p on Grayrigg Forest. 40m CW netted 13 QSOS with ON, EA2, PA, DL, SM, OE and G to give you a flavour of how long skip the band was. That was plenty so I packed up and went back exactly the same way I came up.

Already feeling overdressed I didn’t take the GPS so I was surprised to not find any car park when I descended. I was just about to consult some technology when I realised where the car was. There are a few million paths on here and it’s so easy to follow your nose rather than the correct path. Back the car I changed out of the walking pants and softboots into something more comfortable to drive in, yes a black backless diamante very short cocktail frock with halter neck and a pair of slingbacks. No, I saved them for the rally. 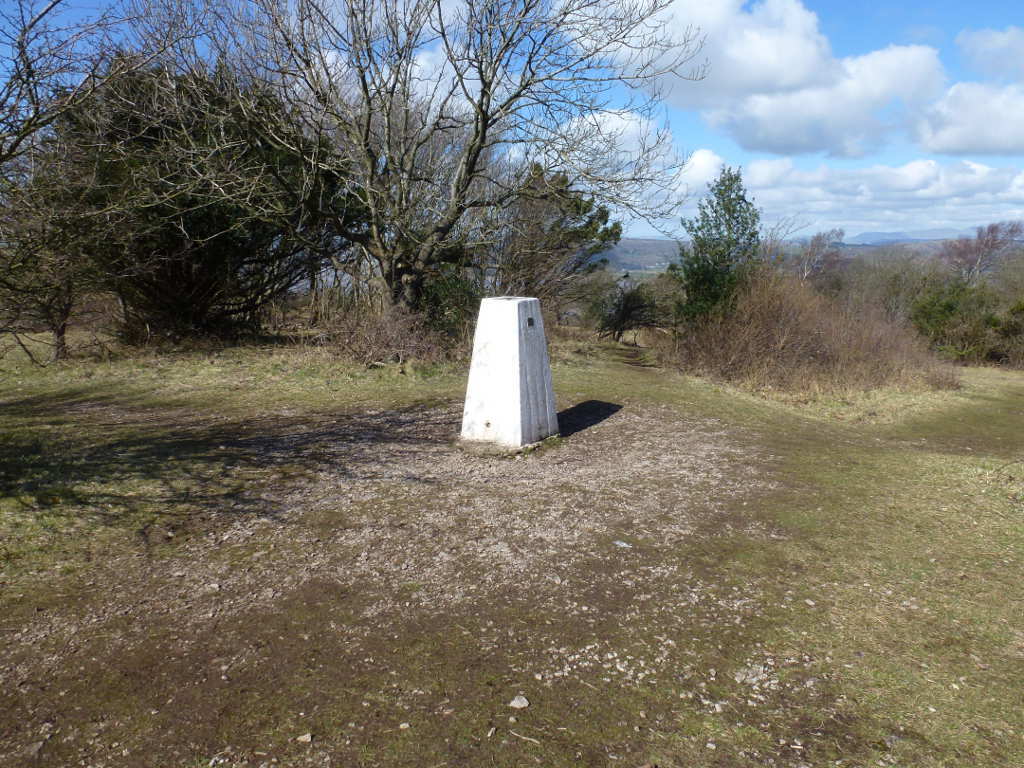 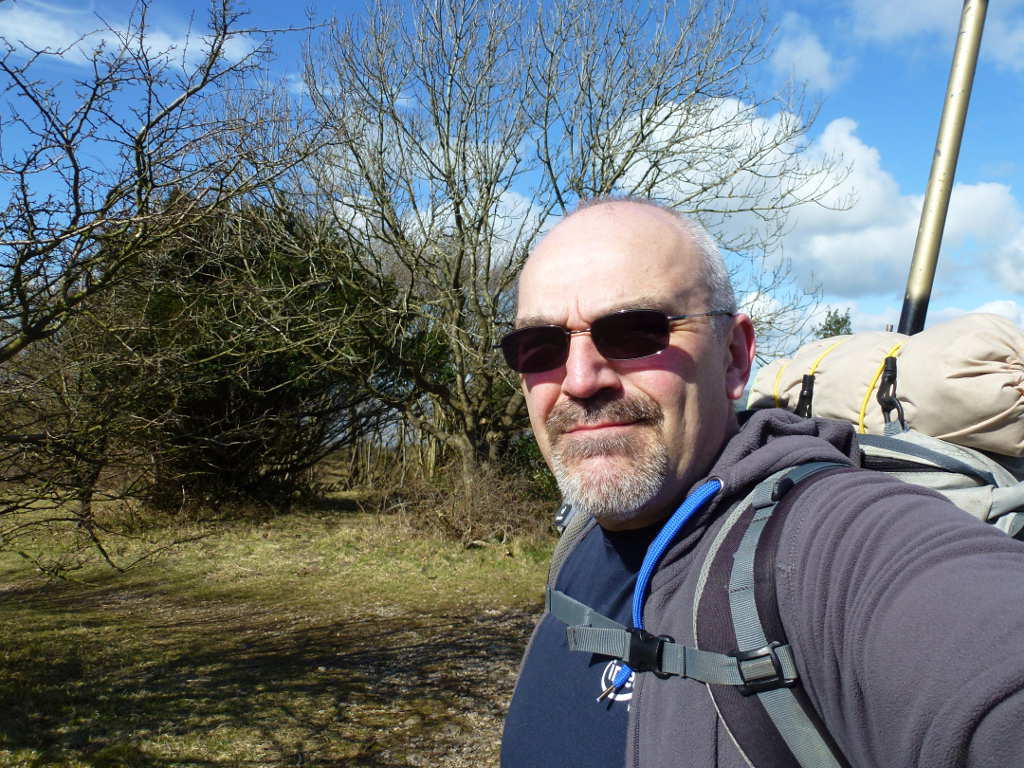 Having temporarily mislaid the car, the next problem was it was high tide and a spring tide too. Result, the promenade was flooded, hence all the signs warning of flood risk. Normal cars were driving slowly through the flood water which was about 75m long and not that deep. There was a queue of gray balding blokes in their mid-life-crisis cars wondering what to do as the water would be over the sills on my car. I found a road going uphill and with judicious use of Orux maps on the phone navigated my self the back way to the A6, A65 and on to Skipton.

The rally… there are lots of reports but thanks to everyone who called in and said thanks.

Geoff G6MZX asked why Aye Gill Pike. Simple reason, I have to drive quite near to it on the way home, I like the name, it’s not to hard and it’s not been on since last August 2015. Again the mid-life-crisis vehicle tried to throw a spanner in the works. The road from Kirby Lonsdale to Sedbergh has a temporary replacement bridge half way along. This is a strange metal contraption that has steep approach and depart angles. Now the sign of a good 4WD vehicle is the approach and departure angles it can cope with. SWB Land Rover Defenders are very good at this, and many other 4WD vehicles need mods to fenders and bumpers and maybe body-lift kits to improve the angles to as good as a Defender. The mid-life-crisis vehicle is 4WD but has bleedin-awful angles so it scraped the exhaust tail pipes on the descent of this bridge. shakes head

At the parking place I changed back into walking clothes, walked towards the cattle grid and followed the obvious track. The track leads all the way to the trig. It’s the classic route and is described as a bit wet. A bit wet? The Atlantic Ocean is not as wet as that path! The WX was a bit murkey and very windy but out of the wind it wasn’t cold. Most people will tell you it seems a long way to the top. I knew it was 4 and bit km but it felt like I was one of Napoleon’s troops retreating from Moscow back to France. It just never ended, squelch, squelch, squelch. Finally at the top there is a trig, a wall that was the perfect windbreak and a nice fence to support the antenna. Result. Ah, and no mobile signal. Boo hiss!

I set up and called on the WAB net on 7.160. There was no net in progress as 40m was not playing but I worked 4 WABers and then someone told me Allan G4VPX was on 7.111, I QSY’d and worked Allan who was just finishing and left me a nicely warmed up SOTA frequency. I managed another 30 SSB QSOs. There wasn’t a pileup as such but just a never ending stream of replies to CQ calls. I also managed to get a signal on an old O2 phone I had with me ‘just in case’ and was able to spot my CW QSY and get 12 more QSOs. Also I managed 3 SOTA S2S and a SOTA/GMA S2S during the activation.

The WX improved and out of the ferocious winds it was T-shirt weather and the murk lifted slowly then so did the temperature. At times it was quite sunny. I packed up, put on the bog-snorkel and flippers and made my descent the way I came up. All sorts of people have comments that it took them an under an hour to climb this. Well it took me 1hr20 but I don’t care. Again there are few good comments about this hill. I would recommend that the best time to do it would have been the big drought of 1976 or failing that when it’s frozen. The surrounding hills look really good but it was just too murky to bother with any artistic shots today. Do this on a crisp blue sunny cold day with frozen ground and it would be just fine. 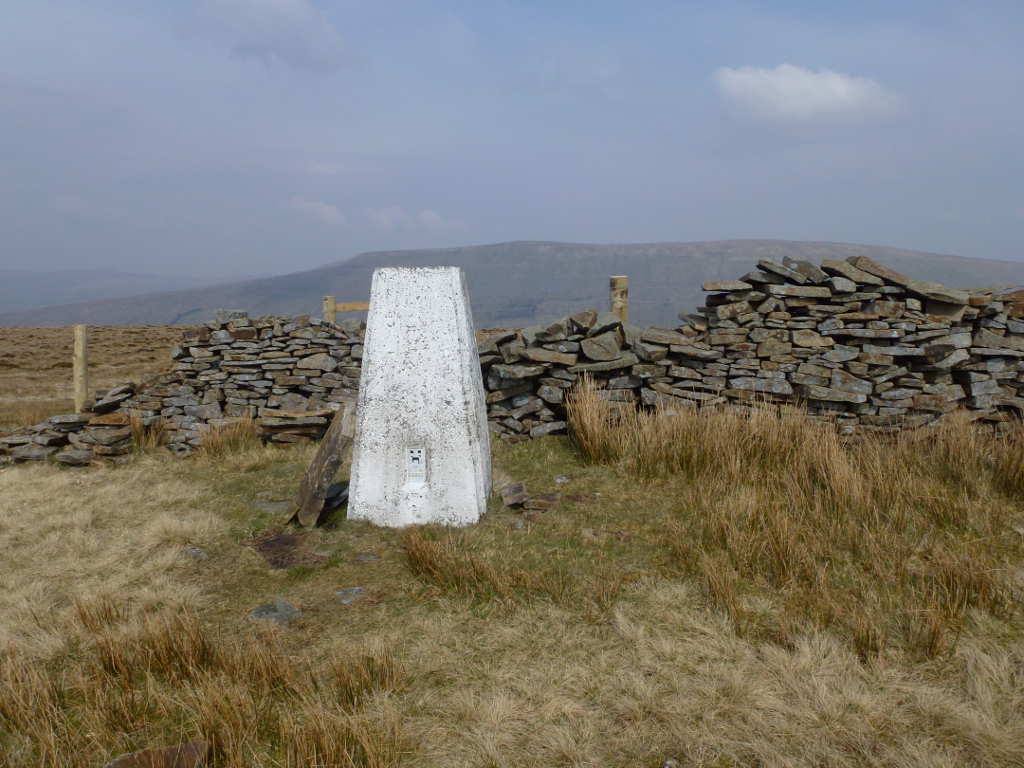 So 1 rally, 2 uniques, 1 flood crossed, 1 tailpipe assaulted (no visible marks) and a few days staying with a good friend. That works for me

I thought I’d almost missed out yet again. Aye Gill Pike has been at the top of my “one that got away” list for ages. I have listened out for activations from the summit many times, but have not had the right conditions to make a QSO. Today I managed to miss you on SSB (despite working Allan VPX - doh!), but noted you hadn’t been on CW and hey presto up you popped. Many thanks for the Complete!

P.S. I see you had an appropriate “brain fade” on Arnside Knott. I left the back door of the car open for the whole activation! Nice people up that way - they didn’t touch a thing!