I had an idea. My favourite SOTA antenna is the 20m quarterwave vertical with groundplane. This was originally inspired by Sean M0GIA, and proved to be DX beast. The most recent incarnation of this in my armoury was the same design made from a kit, designed by SOTAbeams for the 2014 YOTA Conference at Wolverhamton. Essentially the same antenna, but using better materials to be more robust, yet pack up considerably smaller and lighter.

I have also been using the SOTAbeams Micro Z tuner unit with an end-fed aerial. What about using the Micro Z with the 20m GP to give me a multiband GP? First I removed the coax feeder and choc block connector from the original antenna. I then added banana plugs to the driven element and the groundplane (3 radials meeting together). These were plugged into the Micro Z, which was itself secured to the SOTA Pole with a cable tie. 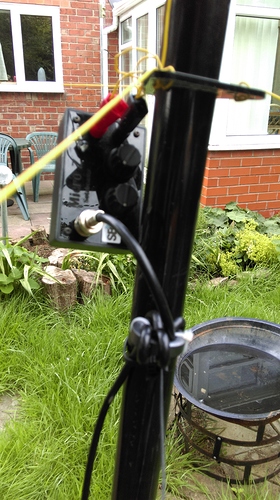 I tried out the arrangement in the back garden and made an easy contact with IK2CIO on 18MHz. I didn’t manage to make contacts on any other bands, but did manage to get spotted by skimmers around Europe on 7MHz and 10MHz. I could tune the antenna on 40m, 30m, 20m, 17m, 12m ,10m and 6m, but not, annoyingly, on 15m.

With nothing happening on the radio, I did capture a nice sunset, over in the direction of The Cloud G/SP-015. 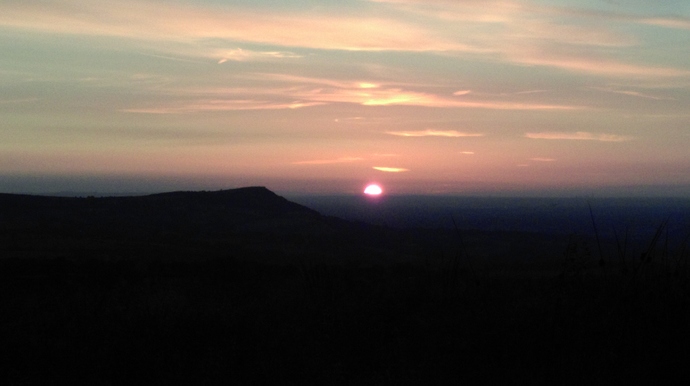 It was then I noticed on the spots that Jonathan G2HFR/P was activating that very hill! I retuned the system to the higher SSB part of 40m and gave Jonathan a call on 7.150MHz SSB for a S2S. Now plans were thrown into chaos, because (a) we got into a ragchew, and (b) this ended up with us agreeing to meet up for a pint. So my evening of slowly working through every possible band to see what my antenna could do, was no more.

Quickly, I tried some 10m CW, bringing in 3 contacts from OM, OH and EA respectively. A passing lady walker was unusually fascinated by what I was up to, especially when I said it was Slovakia I was talking to!

I found Jonathan again, this time on 20m SSB and told him that I was setting off. I suggested that he should therefore pack up in 15 minutes’ time, then descended and drive to the pub.

Upon arrival at the Robin Hood on the A54, there was no sign of Jonathan, so I got myself a pint in and played on the Word Soup game on the quiz machine. As usual, I made a tidy 100% profit on this game. By 9.50pm, and with last orders being called (country restaurant rather than pub), I decided that Jonathan was not going to make it and went out to my car. And that was when Jonathan pulled in!

We darted back in for those last orders and a good natter. It turned out Jonathan had managed to get lost descending from Cloud summit. In fact, from what he described, he should have carried on from where he got to (a point that was about 90 seconds walk from his car!) rather than retreated to the summit and tried again!

Onto today, Tuesday 18th August 2015, and trip out to The Cloud G/SP-015 with Liam. On the previous day’s activation, I had noticed a very good looking path cutting diagonally up the North Western flank of the hill. I had never seen or noticed this route before, which is quite remarkable really, in over 750 activations of this hill! 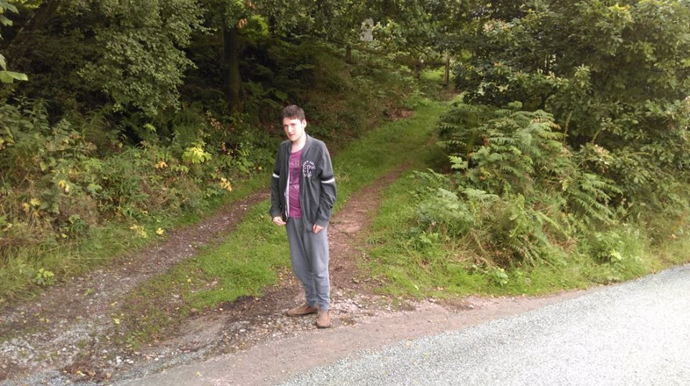 Liam and I set out to find this path. This meant walking downhill along Red Lane from the usual parking spot on Cloudside. After a couple of bends, we saw the path veering off into the trees, and by a National Trust sign. 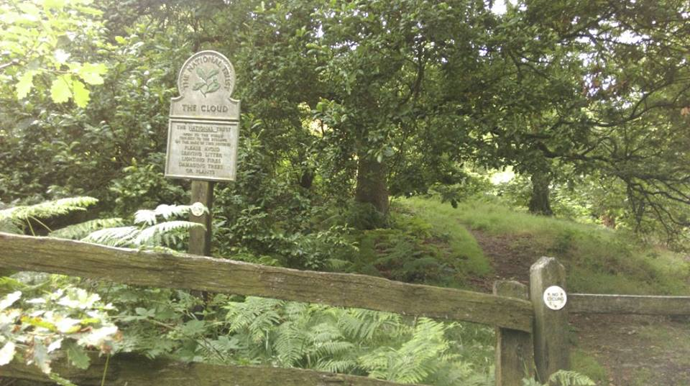 The path then contoured along the hillside at a consistent and graded rate, and for the main was a good flat, firm surface on which to walk. 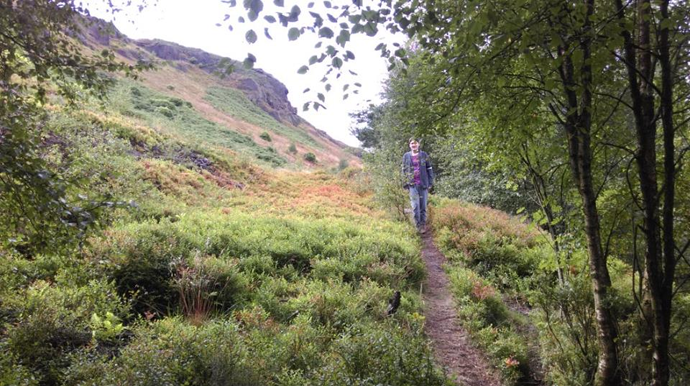 We could see the cliffs dropping off the edge of the summit plateau ahead. We weren’t sure how or where this path would emerge, but for now we pushed on. 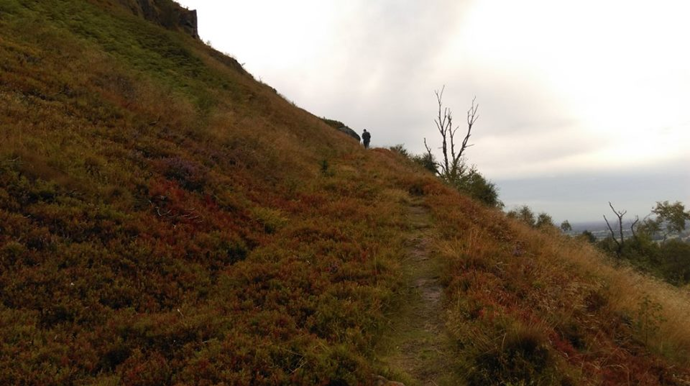 As we neared the summit, we were presented with a choice. The now much less distinct path split into two options. One a slightly less steep route through ever higher vegetation, or swinging left into almost a mild scramble to the top. We went for the latter. The photo below is looking back down the path just ascended. 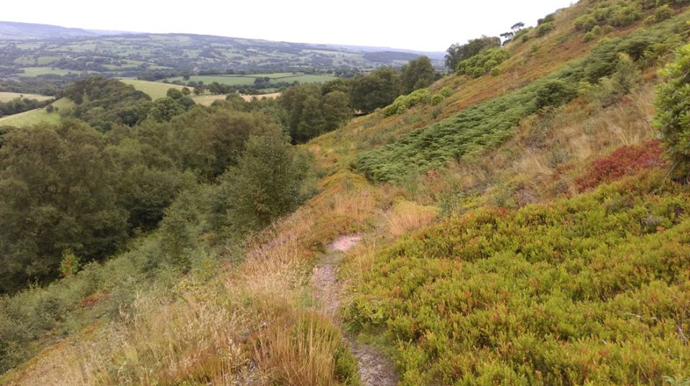 Soon I was at a sheltered spot I sometimes use just below the summit rocks, and then a short walk onto the summit itself. 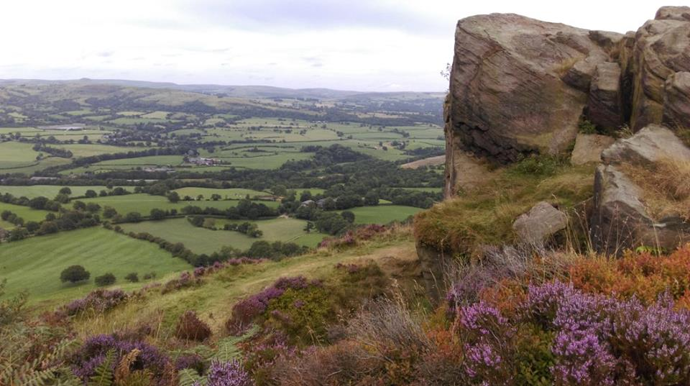 Condx were generally rubbish (I think), unless my butchery of my antenna has seriously ruined its overall RX and TX capability! 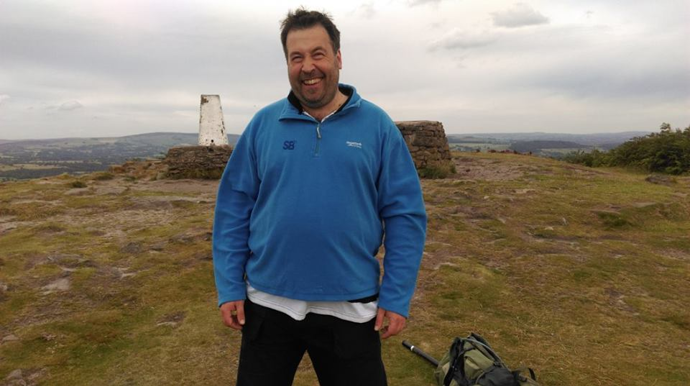 Overall, the experiment to combine the Z match with the 20m GP appears to be successful. Things I would still like to address are:

An interesting and fun couple of days anyway.

How about you try re-making the vertical element out of twin speaker wire with one side cut for fifteen and the other side for twenty? Shorten one radial for fifteen by folding it back. A single radial works well in Andy’s antenna.