I’ve been focused on activating using the VHF and higher bands. One of the things I like to review is activity per band. It seems that the Activator Roll of Honour is the perfect tool for that. I just filter on my Association and Band of interest, then it shows me the scores reflecting just that band.

Except it doesn’t. What I expected was that the score would represent QSOs only from that band. What it really does (I think) is calculate a score that includes activator points for a summit that has at least one QSO on the band of interest, as long as there were enough (4) QSOs from that activation regardless of band

Here’s an example: I’ve made 1240 MHz QSOs from 19 summits with most of them being only 1 or 2 contacts on that band. I had other contacts from those activations that pushed the total over 4 but not on 1240 MHz. Still the Roll of Honour calculates the score assuming 19 summits worth of activation points (104 points in my example).

Important: I am not complaining, I am seeking to understand.

I hope to get sympathy points by using the UK spelling “honour” instead of the more efficient American version “honor”.

You seem to be correct, and I’m actually surprised this is how the filtering works.

I had always, apparently wrongly, assumed if you filtered on a band then you only saw activations where you achieved four contacts on that particular band.

How about this as a possible solution to your problem: 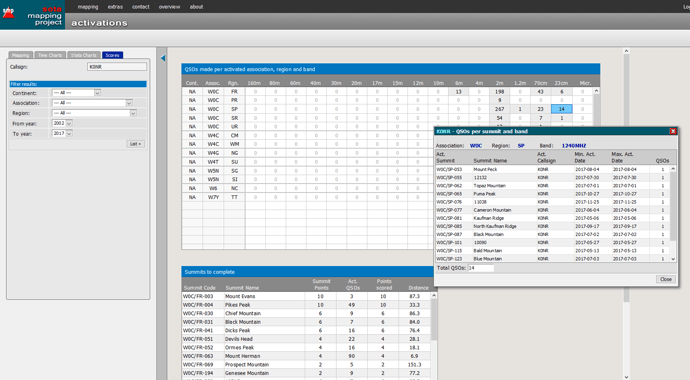 Unfortunately not yet freely available, since it needs the the SOTA single sign on (SSO) , and we’re all waiting for that to be adopted across all SOTA services. January looks likely…

I’m guessing that a totals row at the bottom of the “QSOs per activated assoc…” table could also be useful. Also a points column in the details dialog.

The “facts and figures” section of the database gives the number of QSOs by band, if that helps.

I should have said “total number of QSOs” in the previous post.

The figures are rather interesting:

Who would have thought that a new band which is still not universally available would make number five in the list!

Who would expect from the silences on VHF that 2 metres would be only a little less used than 20 metres?

I am seeking to understand.

It’s the way it is as that is how it worked when I inherited the codebase.

For activators (the DB is much simpler for chasers) we have the concept of an activation. So we place every QSO into a big table of activator QSOs and the we have a table of activations which identify which QSOs belong to an activation and which activations belong to a user. Given that an activation is a fundamental concept, we take a few liberties with best DB practice and we store the same data in a few places. This is heavily frowned up because now you have to go to great lengths to ensure you keep all that data in sync, especially if someone edits something.

But it does have some big advatanges which is why it was done. The entries in the activations keep a tally of how many points and bonus points were achieved. When an activtion is enetered, all the points conditions are checked and if valid, the points are allocated and stored in the activation table. When we need to display activation info such as your own history or the honour roll, the code selects the activations where the user association matches and sums the points from the activation table. The alternative would be to find all the QSOs for each activation for each user, check all the valid conditions for points and then sum and display. The resulting query would be massive and noticeably slower. For chasers it’s easier because the rules for points are simple and can be done on the fly.

So this is why we have data that says I did Broughton Heights SS-128 on 26-nov-2017 and got 2pts. What it doesn’t have is the band or mode. To find those out we do some more digging but for the reasons above, it simply checks if the activations for this user contain 1 or more QSOs that match the filter. So when you select CW, it checks every activation you have and then checks if any QSOs for that activation had CW as the mode. If so, it displays the summit and the points already calculated. In my case of SS-128 yesterday, if I select 17m as a filter, it will show that activation and 2pts because I had 1 QSO on 17m. It doesn’t show the summits qualified on 17m.

You can get this data however. Given that it’s considered costly to do it for everyone, the cost for one user is acceptable. We run the DB on a shared system and we are by far the heaviest user. I don’t want to produce queries that massively impact other users on the host as that would give the hosts a reason to charge us more or ask us to reduce the load or maybe find another host. But for a single user it’s OK.

Login and select “View Results”>“My Results”>“My Activator Log”. This defaults to the last 12 months of your activations. Click the “show analysis” check box and click Show. This shows a breakdown of modes and bands for your activations. The modes and bands shown are the popular ones, needed because I wanted to fit the display on smaller screens (not everyone has huge monitors etc.) You will see a column 23c for 23cms QSOs. In that there will be either nothing, a number 1…3 or Y. Nothing means no 23cms QSOs this activation. 1…3 is the number of QSOs and Y means “qualified on this band”.

There’s pressure to add 222MHz / 1.25m from some US users and I’d like 13cms in there as I’m am QRV on that band now. The problem is screen space. I feel that the fix is likely to be an HF/50MHz table and a VHF/UHF/SHF view.

Hopefully this should help with your confusion. But if there’s anything else just ask. As I said at the start, a lot of the functionality is how it was designed. Considering the design has hardly changed in 13years and we have grown from something that was run on an laptop in someone’s home and could be backed up onto a single floppy to a system supporting thousands of users and millions of QSOs, the original designer, Gary G0HJQ, did a rather brilliant job.

How about this as a possible solution to your problem:

This is a helpful view for tracking QSOs by band for one user. It does not directly solve the Roll of Honour issue which compares with other activators.

Thank you for the thorough reply. I suspected something like this…that the concept of an activation doesn’t track the band info in detail.

The Myresults table is very helpful. For my personal log, I can always download the data and manipulate it to get the info I need. The Roll of Honour page came into play when I wanted to compare with other activators by band.

I just made my first 1.25m SOTA QSO, so yes, please add that to the table.

I continue to be impressed by the infrastructure provided by the SOTA program, so thank you all for the great work.

It does not directly solve the Roll of Honour issue which compares with other activators.

If it helps, after downloading all log entries into a csv file and opening the file with excel, a total for any of the mode or band columns, totalling only the cells with a value of Y, can be done with a formula. My data was in rows 2:184 in this case. And the CW qualifier data was in column U and summit score in column W.

The formulas used were along the lines here:

This sums the summit scores (column W) for all summits where the mode was CW and the qso count for that mode was 4 or more. (column U).

And the count of cells with a Y in the CW mode field can be done with the conditional count function. I used.
=COUNTIF(U2:U184,“Y”)

If your data is longer or shorter than 184 those numbers have to be adjusted. Keep the headings in row 1 or you won’t know which column is what. Check that the conditional column used (U above) is the mode or band you want to count or sum. Your mileage may vary.

I will vouch for Andrews Excel formula. Much easier than a manual calculation (which I also did for confirmation of my log)
The other issue when looking at qualifying summits by band, mode or whatever is the order that those contacts appear in the submitted log (this is not necessarily the actual historical order if the activation crosses over UTC rollover).
As an example, if trying to qualify a summit on 23cm, the minimum of 4 callsigns worked on 23cm must be unique; ie not appear prior in the log on a different band. Similar situation if trying to qualify by mode.
In the end, it really just comes down to self set goals and achievements rather than a league table. Sota is not competitive?

the minimum of 4 callsigns worked on 23cm must be unique; ie not appear prior in the log on a different band.