This is one of the “lower” peaks on Madeira (1436 m / 4711 ft.) yet provides an entertaining day out accessible by public transport from Funchal. The xyl had suggested Pico Grande MI-002 but, being a devout and practising coward, I turned down this opportunity on account of the two very exposed sections to the summit!

Bus 96 (Rodoeste) leaves Funchal at 0815 and turns at Corrida at about 1000. Initially the route is an unrelenting climb (about 250 m in 1 km) up the tarmac road to the car park at Boca da Corrida where you get a super view down into the “Nun’s Valley” and also the main ridge from Pico do Ariero (MI-004) to Pico Ruivo de Santana (MI-001) including the unactivated MI-003. The recognisable summit of Pico Grande with its “tophat” is also easily seen. 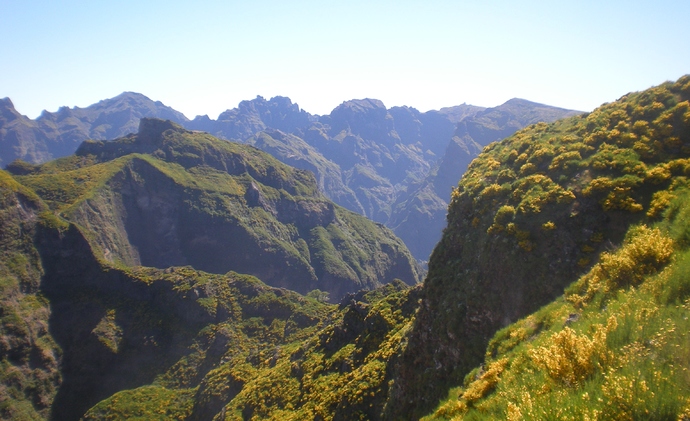 The walk up the road was the hardest ascent of the day although there are some difficulties and “interesting bits” after that. The track goes to the left of the shrine and between gateposts with a chain suspended between them; do not follow the track to the right on the PR path for this way be dragons and other sorts of beings that might reduce you to tears . Simply follow the track, zig zagging up the hill until you see a turn to the right leading to a concrete sheep shelter which you follow. The path goes right of the shelter (marked by wooden posts with useful pieces of polyethylene fixed to them) and becomes increasingly indistinct. The track is way marked from here to the summit by blue arrows but you have to fight your way through a jungle of Broom (thank goodness it wasn’t Gorse which looks remarkably similar but would leave you full of holes, like a colander.) The path reaches a ridge with some spectacular views and some exposure. Provided you stick to the path (look for the post and wire fence leading to the summit ridge) you are perfectly safe even if it is a little airy. The path leads under the escarpment of MI-008 with a couple of scramble moves which might give cause for thought should they be wet. Eventually you arrive in a large flat area with, once again, some excellent views including the cattle which will be a feature of the remainder of the walk. Turn left and follow the fence climbing over a stile and, shortly, the ridgeback summit is reached with its trig point. 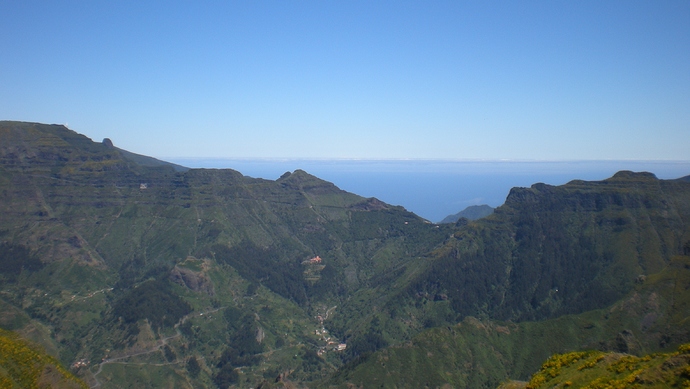 There is a post and wire fence across the summit and that was where I fixed my antenna. Trying to get a reasonable match for the antenna was a nightmare and in the end I decided to risk it with four bars on the SWR meter of the FT817. A post by SMS resulted in two SSB contacts, then nothing. I had hoped that RBNHole would spot me but sending the very unfamiliar CT9/G4TOE resulted in my usual garbage CW so I resorted to spotting by SMS – and the World dropped in! The resulting cacophony, bad behaviour, and extremely fast sending resulted in total brain fade and I struggled to get any callsigns. Eventually I managed to work several stations but whoever was sending at 30wpm (plus) resulted in NIL. Thank you to the stations that did QRS (you know who you are – you are in my log) and my apologies once again as I found my Palm Paddle was starting to produce random characters as the heat got to it – another job for the workshop. I am not a natural CW operator and I find being in an uncomfortable and slightly vertiginous situation causes brain fade and fat finger trouble with the paddle. 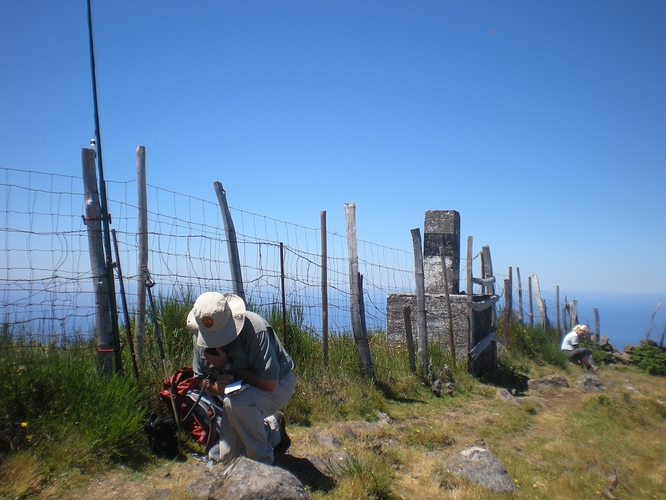 Most people visiting the summit (and there were a dozen or more) had approached from Fontes and returned the same way and that was our route down. Cross the wall at the obvious gap and that is the hardest part of the descent. The downward route follows an obvious track from the wide grass area below the summit (turn left and you will find it), just miss all the bovine calling cards! The track is badly washed out in places but is essentially uneventful, we followed the route round to Pico Cruz so as to get the view down to Ribeira Brava but it is possible to take another (shorter) route via Trompica. 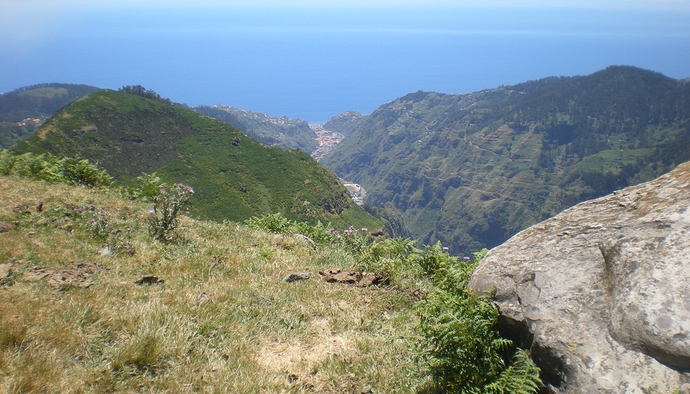 During the descent we saw a lot of smoke (and flame) and worried whether we would get down. There was an out of control fire right beside the track about 2 km from Fontes but the farmer had broken the levada wall and was trying to get it under control – it still required wet hats to act as smoke masks to pass it but shortly we arrived in Fontes and the rather convenient bar in the square. There is a limited bus service (Number 127 at 1410 is the only convenient one) but the bar will phone for a taxi which costs about €25 to Ribeira Brava to catch any of a number of buses to Funchal, but we splashed out €45 for the taxi all the way back to our hotel.

Unfortunately there are very few summits readily accessible by public transport but using the various apps and the Unofficial Madeira Bus Guide it is possible to identify a couple of others. This is a country of absolutely spectacular scenery with a population of some of the most pleasant people I have ever met in my travels around the globe.