A long road back

I was meant to be away on holiday this week doing a wee SOTApedition but a funeral on Monday put pay to that. Tues/Wed I was off sick instead of holiday, so I started yesterday and watched the rain. Today was meant to be good, fabulous blue sky when I got up and no wind but it was to cloud up and get windy. The really bad weather waiting for Easter proper.

I did Dumglow from the North, parking on the minor road after the village of Cleish. I parked at the wrong track and had to drive another mile or so or I’d have not been best please. At the right track gate it was a simple plod to the end of the forest track then into the firebreak at the 10 o’clock position in the turning circle. Follow that to the clearing with the steep slope, on a bit to the tree with all the plastic tape. Turn right, up the slope, over the fence, path to the trig point. Bada-bing, bada-boom… I was at the top in 45mins. I dd 60m SSB which was lively, 40m SSB which was switching between short and long skip and 40 CW. I had an OZ7 call who just ignored the directions, gave me reports, when told to QRX just kept ignoring me and doubling with the station I was working. OZ would have been a new country on 60m but I refused to work him or log it. The WX got worse as I was there and the wind was quite blustery. Again I managed to leave the SDcard in the PC so a few photos taken on my new phone at 13Mpixels. (13M on a phone, shakes head.) 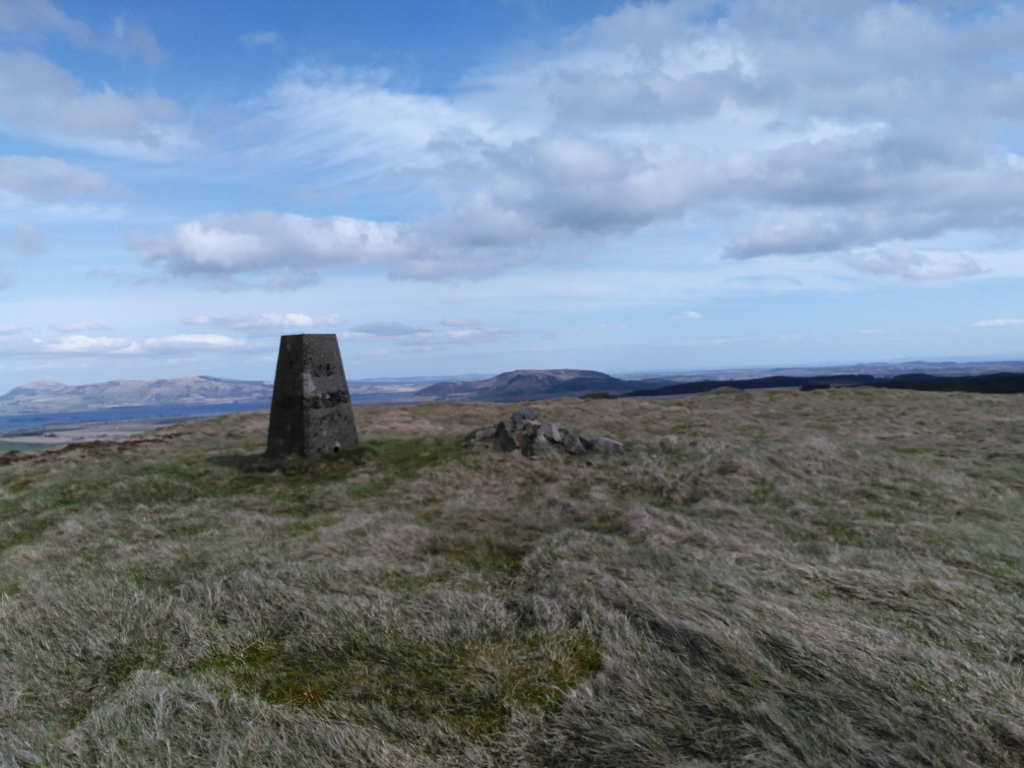 Benarty was from the South. You can start much higher up on the South side. I managed to park and lock up my pickup yet leave the driver’s window wound down completely. So I’ve forgotten the SDcard 3 times now and left the car windows wide open twice. Must be getting senile. The climb starts with a fairly brutal set of steps then a steep at times path. The surfaced path ends at a switchback and it’s a boot generated path from here through the woods to the trig. It was very windy. Enough to shake the pole to collapse 5 times.

Just 60m SSB and 40m SSB. I was about to go onto 40 CW but the pole collapsed again and I was frozen and wind blown. I said some rude words and packed up. But I did work OZ so I got my new country and PA on 60m was new too!

Summit Benarty Hill looking towards Edinburgh. Glum sky and you cannot see how windy it was! 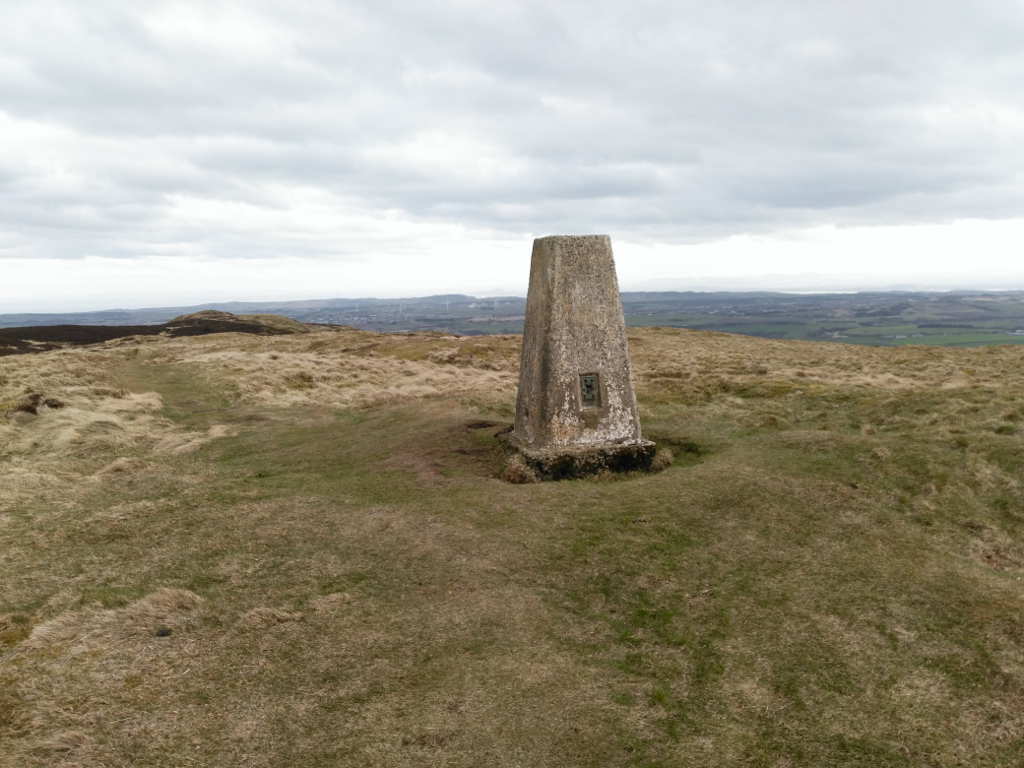 Not a twinge or tweak from my back. I did find 2 simple hills a bit hard at times but my back has been fine. In fact since I started walking again I can say my back has improved. The only things I notice are being outside for a several hours in the wind is much more tiring than I recall. I do lots of rowing but my thighs have lost performance and the front of them complains after a descent.

Another Sunday another climb up a local hill. I was pleased at my performance in NP/LD land and had I not spent the previous week’s Saturday night partying with Messrs. Laphraoig and Balvenie Doublewood then I’d have been out last weekend. I was planning on bagging Course Hill which would be a unique but two things put me off. One was a prediction of snow overnight and I didn’t fancy walking through a huge windfarm if there was the possiblity of snow or ice being shed from the blades. The other was it’s a 4km walk but only 75m ascent and it’s a bit feeble to test me.

So Black Mount, a 40min drive was the target. I’ve done this the easy way up the gentle ridge but that is likely to involve walking through many fields of cows or bullocks now the WX is getting better. The other way is from the Dunseyre side and there is a track part way before you climb up then follow the ridge to the trig. I quite like this way as you get a walk to warm up the legs then a good pull up hill. As it was I took a different route, I went part way along the path then looking at the rising ridge known as “Auld Kirk Wa’s” I decided to go for it. It looks steeper than it is. The hardest bit is crossing the burn draining the hill and that’s not hard. Then it’s follow your nose uphill. There are animal tracks and possibly an ATV track but it was shortish grass and not much heather.

Part way I stumbled across a recently born lamb, a few days old at most. He (or she) was kneeling down and I almost trod on him as I climbed up. Normally lambs and sheep run like hell when they see you. This was struggled to his feet and bleated pitifully. He started trying to follow me but kept stumbling. As soon as I stopped he would stand by my legs and hid behind them to get out of the wind. 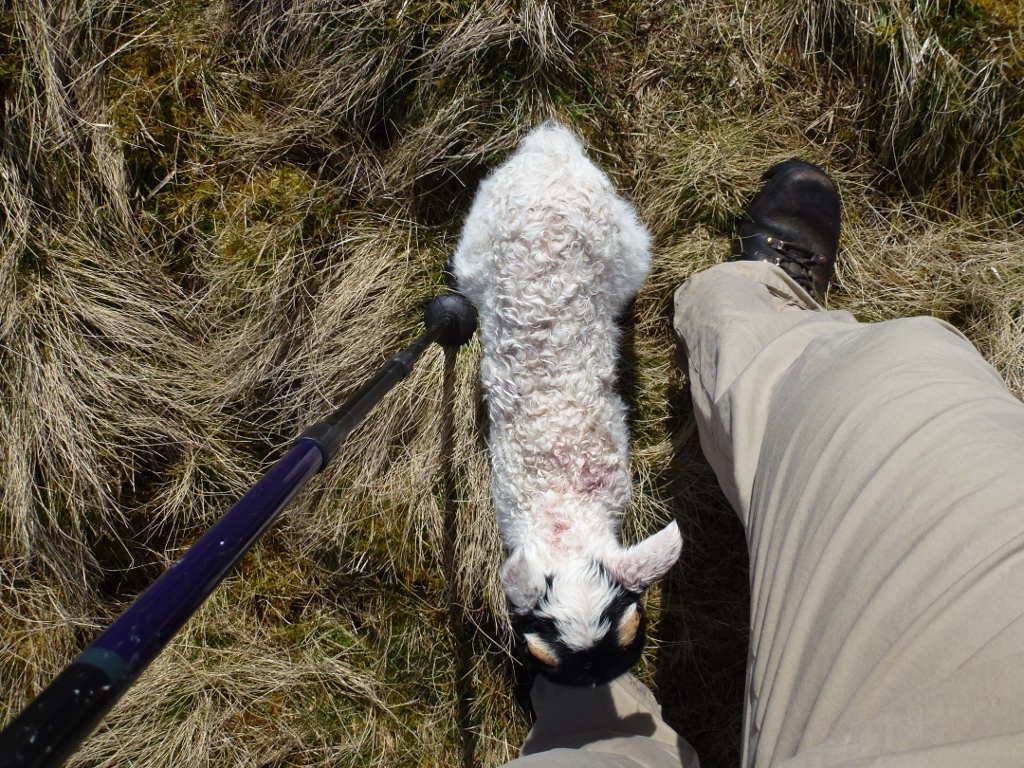 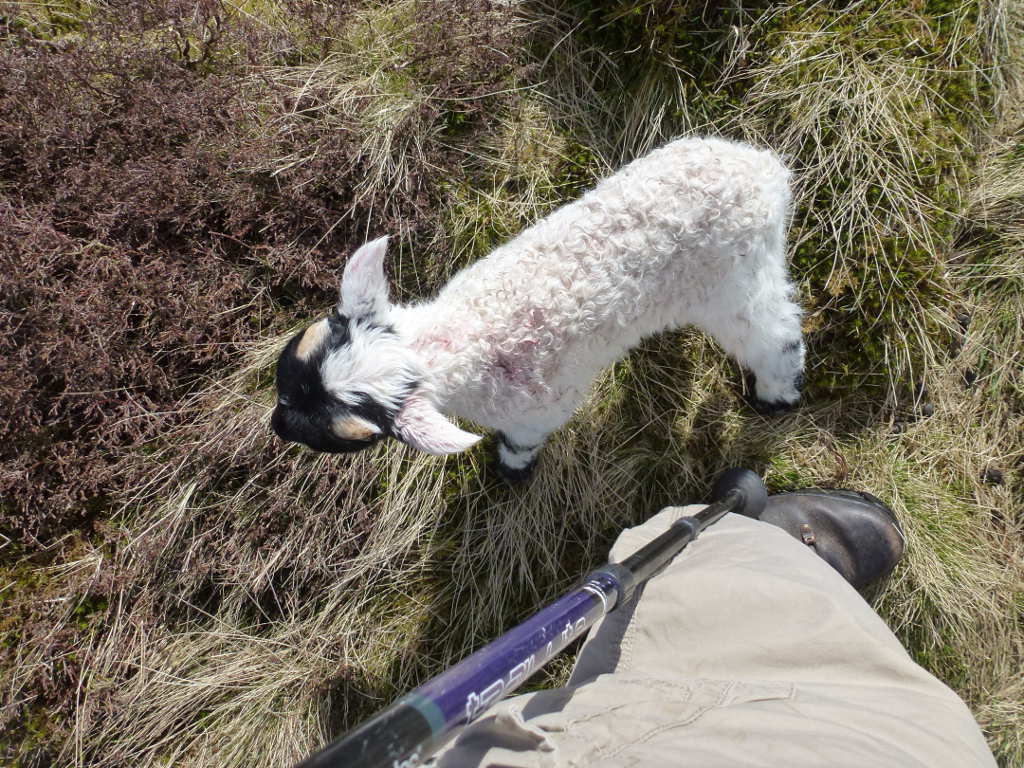 I could see a sheep with a lamb about 30m away but the sheep backed away but was staring me down. Do I just ignore the lamb or do I carry it to the only sheep I’ve come near so far? I really don’t know whether I did right or wrong but I picked the tiny fellow up and carried to halfway to the sheep which didn’t run like they normally do. I made sure I followed the GPS trail back to this spot on the descent and couldn’t see either lambs or the sheep when I got back and a few minutes scouting about didn’t reveal the lamb hiding. I need to chekc what to do in this cases, probably leave nature to nature’s outcome but if you had seen that lamb I think most people would have done something.

I got to the top and admired the view. Computer says 44mins for this route. I took 45 including stopping to move the lamb and take photos. I didn’t feel at all fit climbing this but to hit the time on the nail including faffing about is good enough. No back twitches and pain. The WX was really sunny but the wind was from the NNW and was proper cold. I was able to spend 2/3rd of the summit time in just a fleece but I needed two hats. The big jacket came out later. The sun was great but the odd cloud blocking out made me realise just how cold the wind was.

Radio conditions? Absolute rubbish. I started on 40m CW and called a few times and nothing. I wondered if RBNhole has missed my alert, checking RBN later shows no spotters heard me. Boo! Hiss! Anyway I worked David G3RDQ and he spotted me and the calls started. I was also spotted by SP8RHP. G3RDQ & G3RMD were the only G’s to work me. EA2, DL, SP8, SM7 showed the skip to be long. EA2LU was stunningly loud signal. Now my phone was faffing about not getting a signal that made self spotting hard but if I left it on my bag it would work, placing hands by it to type caused the signal to drop out. Grrr! Hard to self-spot I tried the WAB net frequency 7.160 as there would be listeners there, if 40m SSB was OK I was hoping one of the WABers would be a SOTAdude and be able to spot me. As it was conditions were pants, total and complete pants. Certainly not Robbie Rocketpants! I struggled to get 4 QSOs, ON2WAB, G1YFF, G4HPE/m and SM6CNX.

After this debacle I thought I’d see if 60m was working. I announced to the WAB net I was QSYing and luckily worked 2 WABers on FE straight off. I managed to get a spot out and worked 4 chasers. After that I tried 30m and 4 in quick succession but then it dried up and I couldn’t spot. Back to 60m and I had a long chat with G3VOT and we were 59 each way. He was impressed with the signal on 60m for a barefoot 817. I picked up G4RQJ/p on NP-017 for a quick S2S. I thought I’d call out on 2m FM and went for the VX170. It was in the pocket but no antenna. Now don’t ask me how but an SMA screw on antenna had unscrewed itself since this morning in the shack and me climbing Black Mount.

Well I thought sod this for a game of marbles and packed up. I was only out for a quick walk, and to check the bag has the right stuff in it ready for Harris next week and now I don’t have a twig for the handy. I followed my track up on the GPS back down studying the ground but there was no sign. It wasn’t in the car boot or on the shack floor. Booger, booger and thrice booger!

OK I have stolen a dual band antenna from another handy for now but I need to replace this now. 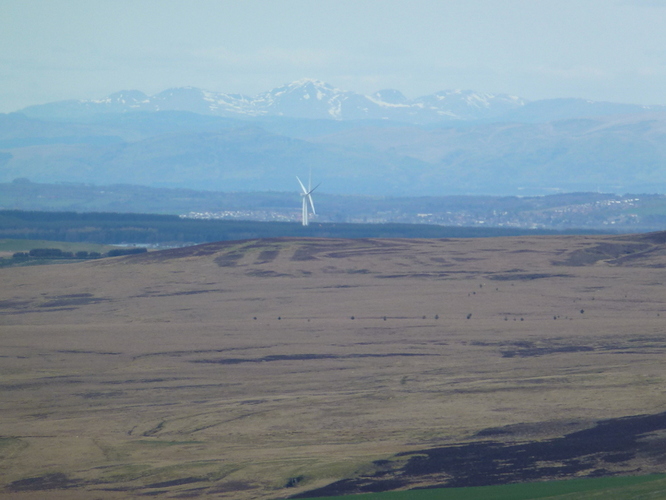 This was a good walk TBH, short and sweet but let down by me maybe interfering when that lamb was OK, rubbish radio and losing my rubber duck. Back a the car in 25mins was a bonus. Here’s the Auld Kirk Wa’s route, when the track goes around the bend, drop down then up the other side. 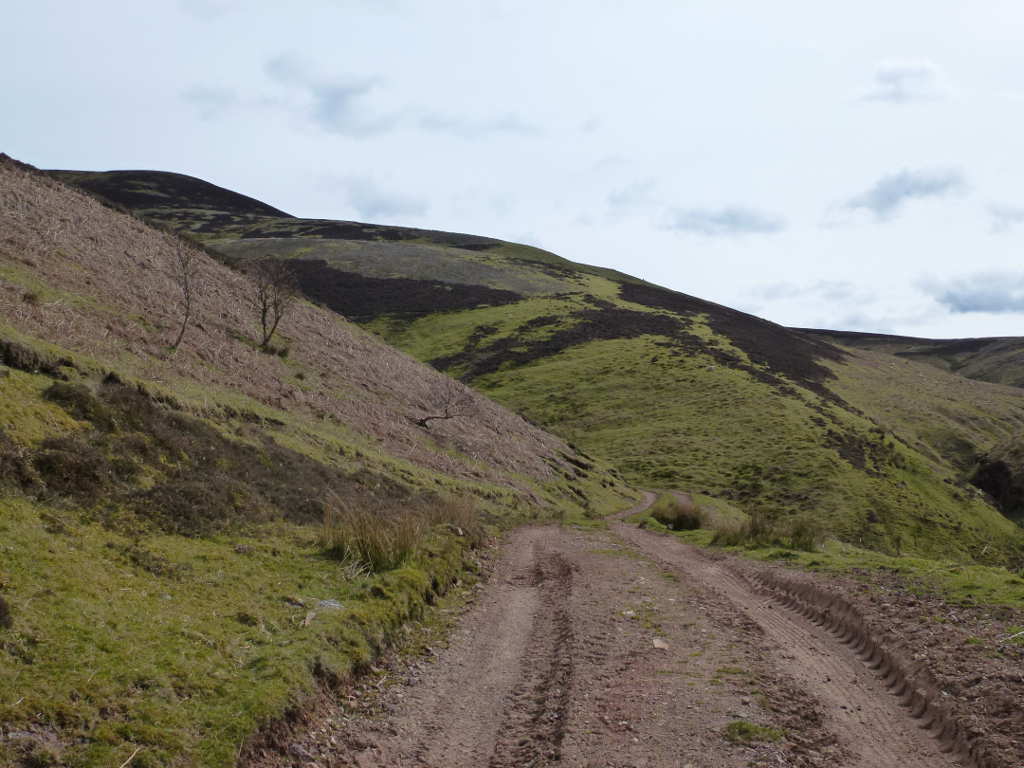 If anyone has a 2m SMA male fitting rubber duck they want to get rid of then PM me. I’m off to ensure I have everything ready and working for the trip to Harris and Scarp including spares to keep in the car.