I didn’t play SOTA yesterday and dedicated the whole day in this summer holiday to the family. In the afternoon-evening we went with some friends to this beautiful beach called Playa de Villarrube, which is a protected area with the salt lake behind the beach seen in the following picture, which gets refilled and partly emptied every 6 hours with the tydes. 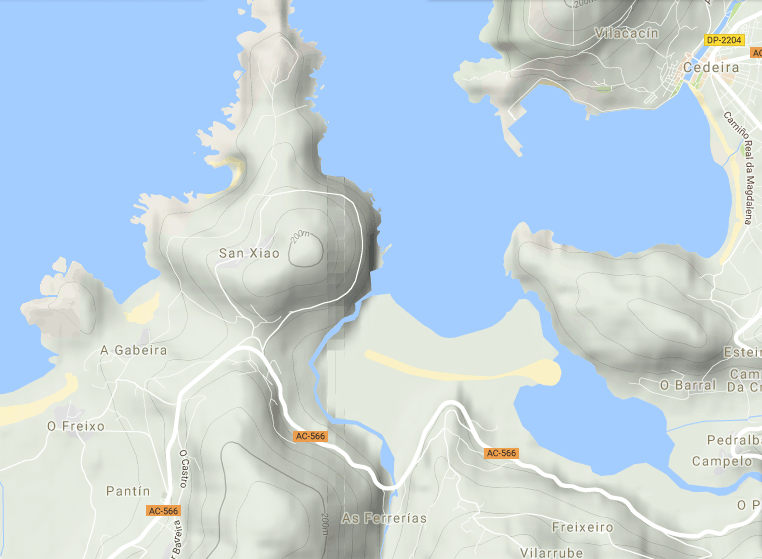 When we were driving to that beautiful place I stopped the car to take this picture. 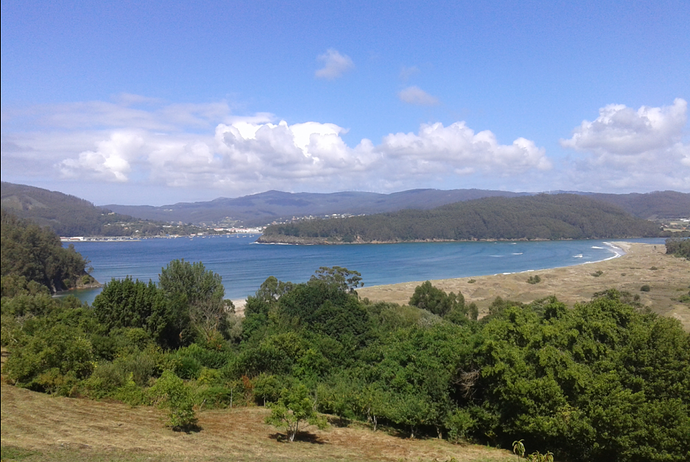 Far in the distance, the very nice village of Cedeira.

Once in the beach we had an new interesting finding of local fauna. It was an unusual type of insect and I’m going to show it to you because it’s a really rare and difficult to find one. 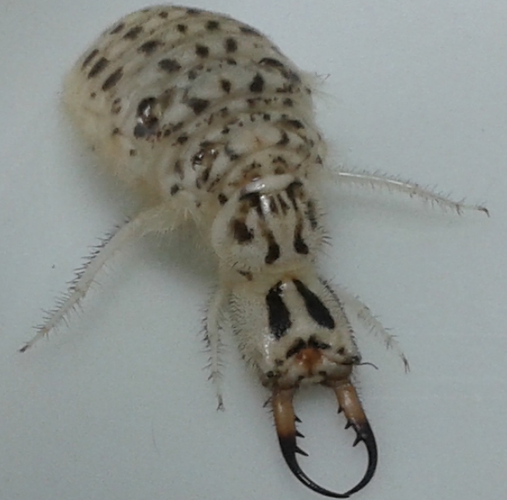 Not that I knew it, but after some research and help from my friend Ric EA4ZK, I can tell you that this is a baby of Synclisis baetica (Myrmeleontidae). I won’t say anything else…

After the beach we had dinner with our friends and our kids in a resto and we got late home, but even though, I connected to internet in order to try to plan my SOTA activation of today.

For some reason, my USB mobile internet connection didn’t go well and after some trials, I gave it up and go to bed while trying to find some SOTA target looking on SMP with my smartphone.
The SMP maps can’t be seen on my smartphone and I could only get the GPS coordinates of a SOTA I pressumed I could reach today.

When I got to the car early this morning, I inserted the coordinates of the targetted summit and thus found that it was 80Km away.
That was a bit too much for what I was fancying this morning, so I immediately decided to change target to a summit that I activated a few days ago, but my friend Jorge EA2LU couldn’t chase and he had asked me to repeat one day if possible before I finish my holiday time here.

Mt. Pendella EA1/CR-002 was a very pleasant activation last time I did it and it would be a pleasure for me to repeat it and give Jorge EA2LU the chance to chase me.

The distance to Mt. Pendella from my holiday QTH is about half of that to my initial and finally abandonned target.

This morning was very cloudy with even some particles of water being released by the mist and so it’s now, while I’m writing this report. This means that there are not any plans to go to the beach or anything outdoors with the family today.

I drove to the same spot where I parked my car last time but I stopped a couple of times the car in the narrow and absolutely empty road to take these pictures. 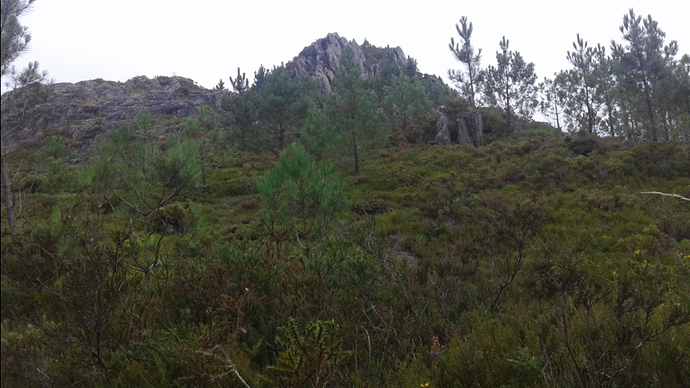 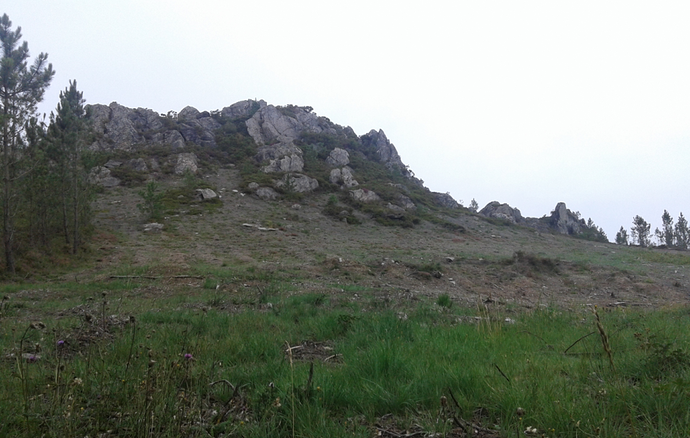 As soon as I parked, I put my boots on and started the hike on an easy track looking like this: 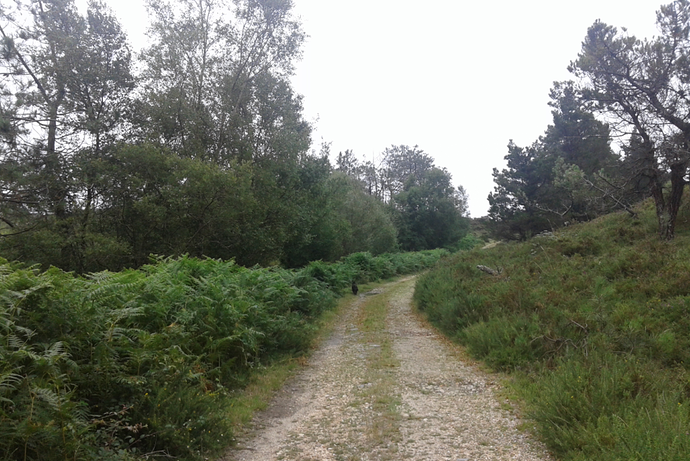 I usually hike pretty fast and it took me a bit under 20 minutes to get to the summit, which was inmersed in the fog and with some wind.

For today’s setup I decided to do it in a way I have done before in previous activations, which lets me get the top of the endfed antenna wire about 1.5 metters higher than with the standard setup.
Instead of attaching the telescopic fishing pole to the trig point cylinder, I attach my wooden walking stick and then I put the bottom end of the telescopic fishing pole on the top base of the trig point cylinder and tie it to the wooden walking stick.
See the following pictures which speak by themselves: 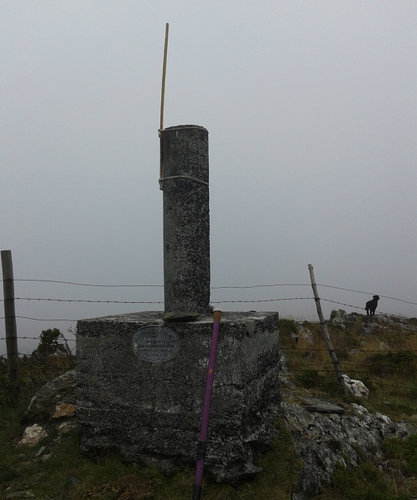 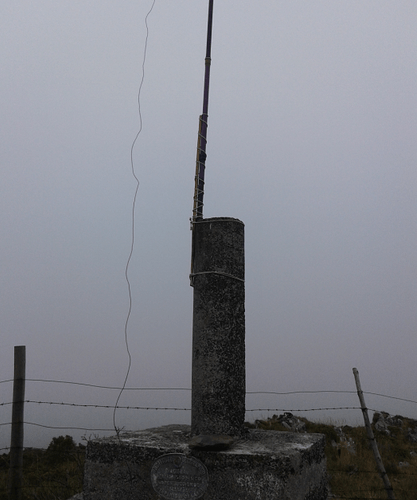 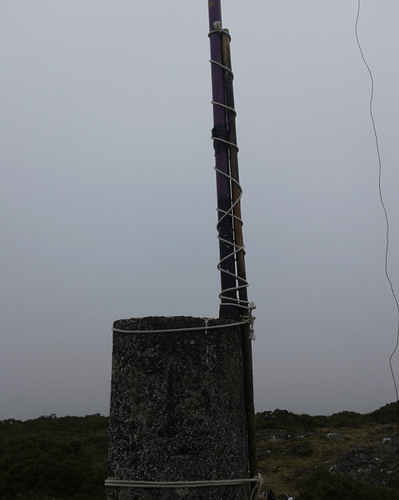 The counterpoise wire got extended on top of some bushes in a way that the wire got about 30cm above the ground. You’ll see it on the bottom left side of this picture. 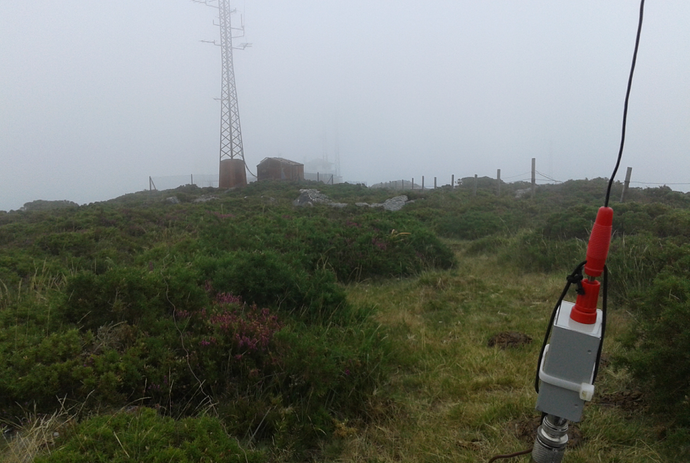 This picture shows the complete setup. 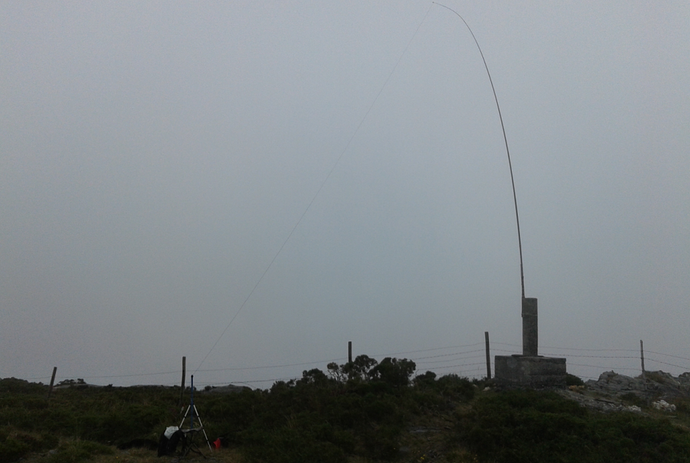 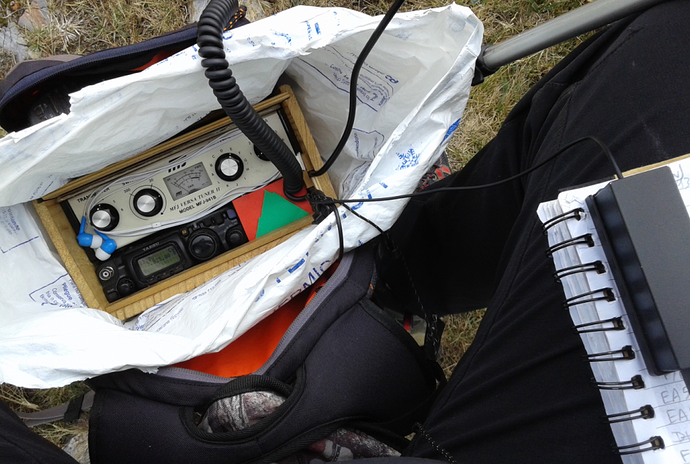 The blue and white wired earphones are a 2nd set I have for visitors or approaching people wishing to hear what I’m doing.

I knew that my friend Ignacio EA2BD was going to activate today in Navarra (EA2/NV) and of course, I wanted a S2S QSO with him.

As soon as I switched on and saw a spot for him on 14.062, I went to the frequency but it was about 30 minutes later than the time of that spot and I could hear nothing of him nor his chasers.

After a few minutes and an unresponded question to Ignacio through whatsapp, I started CQing on that same frequency.

Roy G4SSH was the first chaser -thank you- and right after this it came the WALL.

- and with some difficulties at times, having to ask for a repeat a couple of times due to being unable to pick up a single callsign or even a couple of letters to select a single caller, I little by little managed to work all of them.

It was a lot of fun and I anjoyed it a lot. From a CW operator point of view, pile ups in the beginning of the activation are the most enjoyable part of it.

My friends Jorge EA2LU and Ignacio EA2BD/P in Navarra said through whatsapp that they were not copying me on 20m, so I QSYed to 40m.

There I got chased by Jorge EA2LU, then I moved about 1Kc down for a S2S QSO with TM10SOTA activating F/PO-149 and right after this I got back to my initial frequency and was chased by EA1ATH. At this point Ignacio EA2BD/P, activating EA2/NV-036, chased me giving me the 3rd S2S of the day. Thank you!

Several chasers found their way down to my log up to a total of 26 QSOs in 52 minutes, 6 of which were S2S. In this time I lost some QSOs due to QSB. Sorry…

At this point, I QSYed to 30m and after trying to unsuccessfully work an activator for S2S, I moved to a clear frequency and started CQing.

This run produced 6 QSOs, one of which was another S2S with Petr DL/OK1CZ/P activating this time DM/BW-110. Thank you!

After some unresponded CQing, I saw that the right time for DX with Noramerica on 20m was approching so I QSYed there.

Then I moved to a clear frequency sent a selfspot and started to CQ.
ON6KZ chased me first and then the very much wished DX from USA arrived, thanks to George N1GB.

Two HB9 chased me and then 2 more DX from USA, one was Bob AC1Z and the other was Rich N4EX. Thank you very much guys. You made me a very happy activator today!

Some more CQing brought an ON and a GM onto the log.

It was 12h09 utc when I logged the last QSO. I had been 3 hours and 13 minutes activating and my battery should be very much in the limit. So I was too and I switched off, packed up and descended in about the same 20 minutes of the ascent.

The mist and fog was present all my time in the Summit and this is how the PVC tube in my tripod was at the end of the activation. 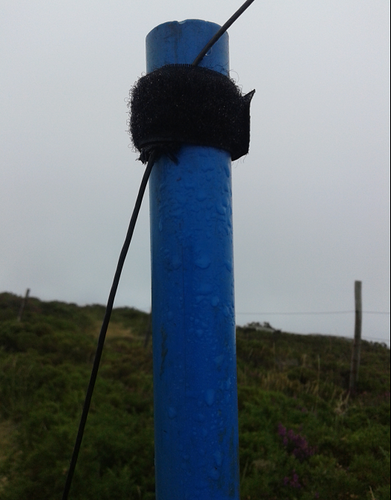 In the beginning of our descent, we found an important number of cows with big horns in the middle of our way and my friend Lucho, the dog, did very well barking and making them run out and away of our path. I also helped screeming shepherd style voices while waving my arms and hands with the fishing pole and the walking stick.

Fortunately the cows got scared of us and run away in all directions crossing one each other sometimes in a quite caotic way, as a prove that they were really scared with our noises and arms waving.

All in all, 96 QSOs, 9 S2S and 3 DX USA in a really memorable and highly enjoyed activation. 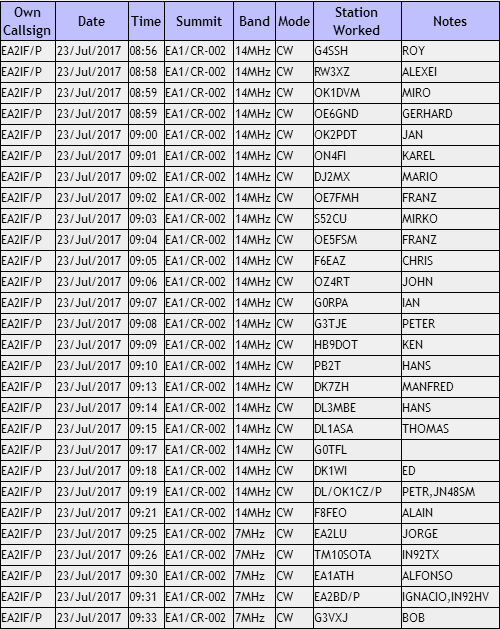 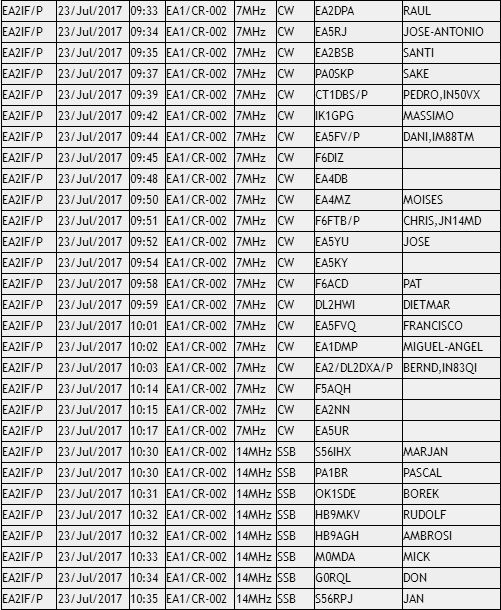 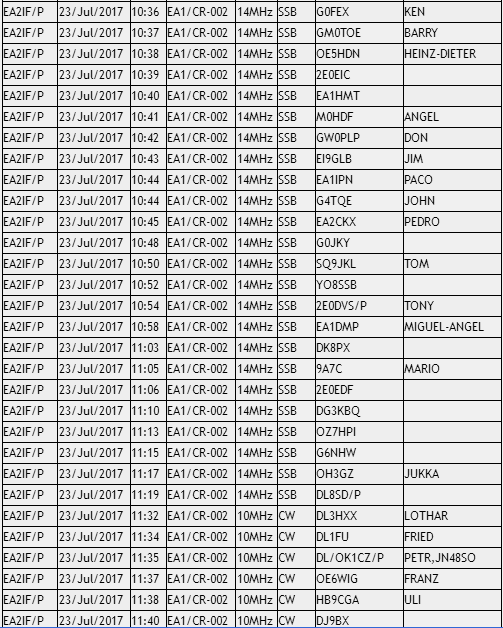 Once back a the car, this happy activator sais thank you dear chasers for your calls and QSOs 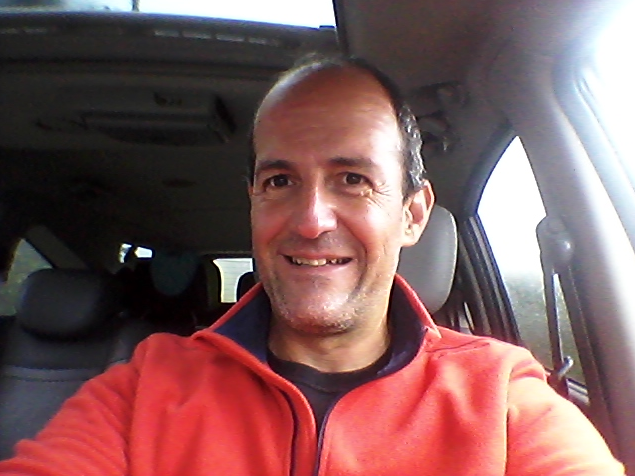 Sorry to those lost in the QSB

I could look at that view across the beach and bay in your first photo and it would never get tiring.