A few summits around Edinburgh

After a week’s training course up in Edinburgh, I managed to book an extra couple of nights in the city before heading back to Cambridge.

Unfortunately, after wonderful weather all week, the weekend was a bit damper throughout!

I started with East Cairn Hill, GM/SS-282. It’s a 2-pointer, with a 6.5km walk-in. Parking at NT126548, I waited for the worst of the rain to pause, and set off up Thieves Road. Pausing a couple of km in for a quick pass of the SO-50 satellite, I worked out that if I got a move on, I should reach the summit just in time for the next pass. The cairn that presumably gives this hill its name isn’t at the true summit, but rather to the west. There’s about four stones at the actual high point - obviously a work in progress! After managing some more QSOs via SO-50 (and indeed qualifying by this point), I set up 40m. Conditions weren’t amazing, but again easily filled a page of the log.

Finally for Saturday, I headed up Allermuir Hill, GM/SS-171. There’s a nice car park at NT245652. A slight detour to avoid a herd of cows with calves took me under the old radio masts at NT241653 - obviously now disused, but I did contemplate if there was the possibility of connecting it up to the KX3! The view from the top across Edinburgh is spectacular - well recommended. A convenient fence also made keeping the mast upright easy.

I’d originally planned to activate Arthur’s Seat on Sunday morning, but reading the previous reports made me aware of the need to get advance permission, so I changed plan.

Heading further south, White Meldon GM/SS-208 started the morning, this time on 30m CW. K had by now dropped from 4 to 2, and the band was obviously in better shape than yesterday. The only challenge was the increased wind and lack of fence posts meant operating CW with one hand while holding on to the fibreglass pole with the other! Sorry for any particularly dodgy CW…

Finallly, Broomy Law, GM/SS-209 finished the weekend. Parking looked like it would be the challenge when I’d looked on Google Maps beforehand, but there’s some decent space around NT070414. I suspect you could also park up the track around NT075420 if you wanted an even shorter walk. There’s a decent amount of comms gear at the summit, as well as some power lines. Couple that with the electric fence I bungeed the mast to, and I was expecting some amount of RX noise at least, but thankfully not! The 30m dipole wasn’t quite in the orientation I would’ve liked it in, but I didn’t really want it parallel to the power lines either. It didn’t seem to matter though, with 23 QSOs in the log before the rain once again started.

Thanks all for the QSOs - now time to get the train back to the flatlands of Cambridgeshire!

Thanks all for the QSOs - now time to get the train back to the flatlands of Cambridgeshire!

You and me both minus the train

glad you had fun !

Was pleasantly surprised to hear you so well yesterday. At first the signal was well down in the noise, I suspected that my home built MTR5B was a little insensitive, so I hooked up my FT817. Using the FT817, your signal was still weak and buried in the noise, so at least my MTR5B is as good as my FT817 as far as receiving is concerned.

I’d ran back into house to grab my FT817 to try to listen for you on the satellite, (my FT-60 handheld is AWOL), I have a spurious internal battery which is useless for transmitting, but ok for receiving. I’m not a satellite op, so by the time I’d found out that the downlink was on 70cms, I think the pass had finished!

My son was asking me about the FT817’s features and I’d hooked up the MTR5B again, just listening to your 40m frequency with one ear, all of a sudden your signal just came up to a very good level. After my second try I managed the QSO. Antenna was SOTA inverted vee at 8m apex, rig was MTR-5B s/n 070 running from a 3S via silicon dropper diode. Power output probably around 4W. 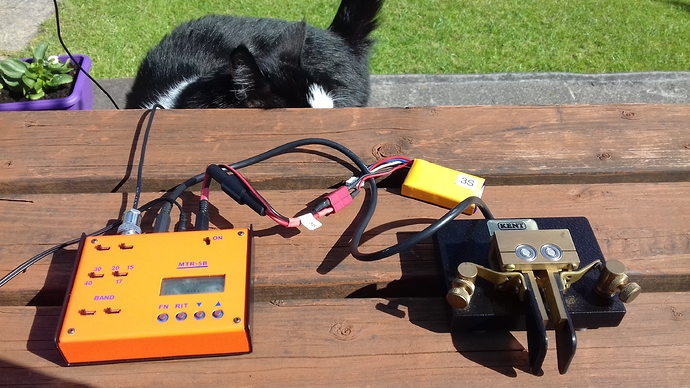