A busy August on the Irish summits

August was a busy month on the hills. I manged to activate five summits in three EI regions. It wasn’t all plain sailing, though, with one failure to report, but all in all it was great fun, indeed.

It didn’t start well. On Saturday 8th visiting Cork for the weekend, I detoured via the Tipperary/Waterford border, aiming to activate Knocknafallia EI/IS-028. Weather was good, cloudy but a strong easterly breeze. All the equipment was checked/tested on Friday. The antenna for the activation would a 40m doublet with 450 ohm feeder and 4:1 balun which tunes up 40-6m. An early start had me parked up for the hike at 1030z and I was at the summit at 11:30z. I set up the doublet at about only 6.5m because of the strong wind and began calling. Tuned up on 40m, and called for 10 minutes without success. Switched to 20m, but the doublet would not tune-up at all! Something’s not right here. Unfortunately, I had left the 20m dipole in the car, so I had to persevere with the doublet where it would tune up. Despite many calls, I got no HF responses at all! I eventually got one contact on 6m M6ZXZ in Cornwall, probably direct line of sight from here, there was no Es on the band. I finally tried both 2m and 4m FM handies. I expected little, and received even less success there! Disappointing, but a rookie’s hard learned lesson. Not sure what the problem was, I could find no loose connections on the antenna. 450ohm feeder is a pain to work with on a windy summit and blows around like a sail if it’s not taped down well. I also suspect the LDG 4:1 balun may have an intermittent fault. Time to invest in some better hardware… 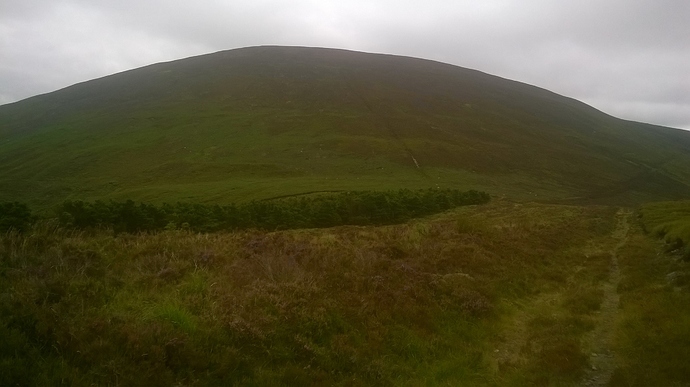 Returning home on Sunday 9th, I travelled via north Co. Cork, aiming to activate Musheramore EI/IS-033. This time the resonant 20m dipole was deployed. It’s a fairly easy climb from the main road straight up the side of forestry, just some boggy patches to avoid. The summit of Musheramore is a broad boggy plateau and if there had not been a trig point, it would have been tricky to decide where precisely the summit was. I set up the antenna at the trig point where there was one little dry spot to sit, on the ledge. I was on air at 11:30z and thankfully, I had no problems validating my activation this time. Highlight of the qso’s was my first transatlantic SOTA qso with W2OW. 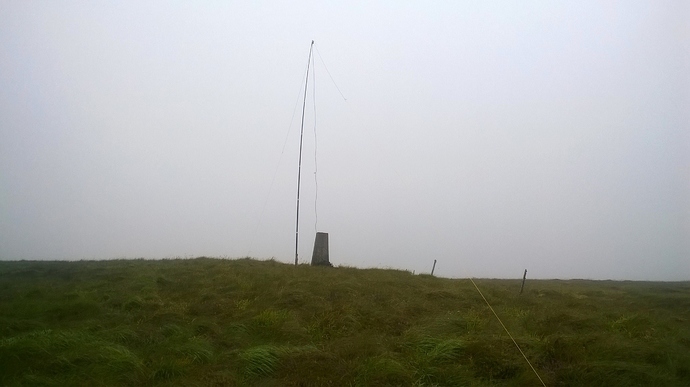 A great weekend’s walking but I only earned half of the activator points that I should have done. I guess it’s a process of trial and error to find a setup that works well in less than perfect conditions. If I was happy to settle for a single band, the 20m dipole would probably suffice. But even the dipole has its limitations – for one thing the balun is a bit like an inverted pendulum in the wind!

The family holidayed in Co Wicklow in the middle of the month and this gave me the chance to activate a couple of summits in the eastern region. On the 20th, I planned to activate Croghan EI/IE-013, this time with my wife and kids (12 and 10) in tow, but when we arrived at the most obvious forestry start point, we discovered that a massive wind turbine project was underway and all access was blocked. A quick re-think pointed us to Croaghanmoira EI/IE-010, about 20 miles away. This was a great hike up through forestry tracks and following a rough path to the misty, windy summit. It was actually fairly dry under foot - my son walked up in his football astro-trainers! 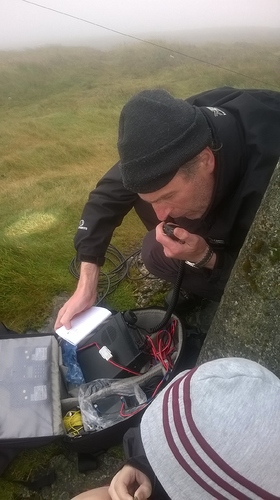 I put my newly acquired 20m long HYendfed EFHW into action and, after being spotted by G6TUH (thanks, Mike), I had a pile-up all of my own. I could have fielded calls on 20m all afternoon, but with the kids in tow and a gale blowing, I pulled the plug after 15 qso’s. The kids had never heard a pile-up before, and for a brief moment or two, I think even they could appreciate the magic that is amateur radio!

The following day, the family went to Dublin shopping allowing me to tackle Djouce EI/IE-007. The Wicklow mountains are Dublin’s playground and I was greeted at the car parking spaces by a group of good-natured moto-crossers tearing up and down the forest tracks. Once through the forestry, and on to the mountain itself it was just a long trudge across the heathery hillside to the summit, not an especially steep climb. There is a board-walk path up via a different route, but that seems far too easy. Once operational I had a stroke of luck as I tail-ended F/EB2AOC/P’s activation of F/PO-173, got a s2s, inherited his frequency , …and his pile-up! That kept me busy for half an hour or so. 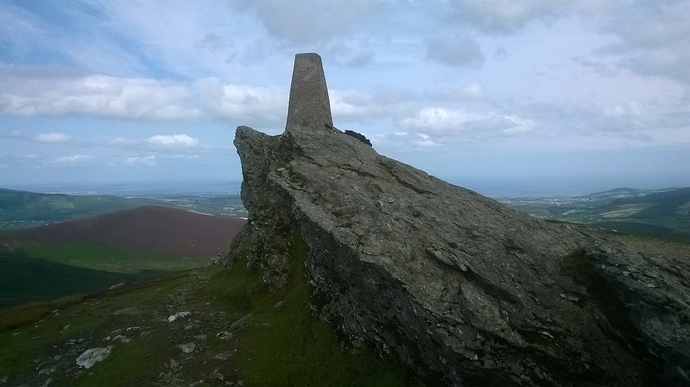 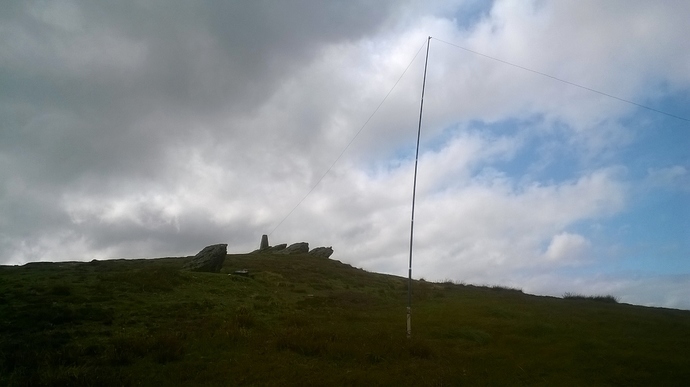 And so to the grand finale of the month’s adventures. Back home in Co. Galway and I’m getting more confident now, thinking I’m ready for some proper hiking. Why restrict yourself to one peak when you could activate two 8-pointers on the same hike? The mountains of Connemara and Mayo are a chocolate box of SOTA delights. Why not pick two that haven’t been activated as yet? Long range forecast looked good for Sunday 30th with little wind, mild, and probably good visibility (vital on these mountains). An early start would get me on the hills by 8:30z. I decided to attempt activating EI/IW-016 Maumtrasna and, if all went well to continue around the horseshoe ridge crossing two smaller summits to Devilsmother EI/IW-022. From the parking spot, the hike starts by following the course of a small river upstream. Shortly afterwards, when I was well into the first climb of the day, I realised that I was actually following the route in an anti-clockwise, not a clockwise direction as I had intended. Not a big issue, but meant that I would activate EI/IW-022 before EI/IW-016. No way was I turning back now. This climb was gruelling! There is an extremely steep gradient for 600m meaning having to use hands as well, because of the weight of the back pack. Towards the summit, the gradient eases where the ground is full of bog holes. Having taken twice as long as I had expected, I set up operations at the pile of stones marking the summit. By now, I had realised that this was a proper mountain that deserved respect. Having got my requisite qso’s on Devilsmother, I packed up and took stock. Do I retreat back down the way I had come up or go on? In the end, I decided to proceed – time was still on my side, but I had to keep my wits about me. 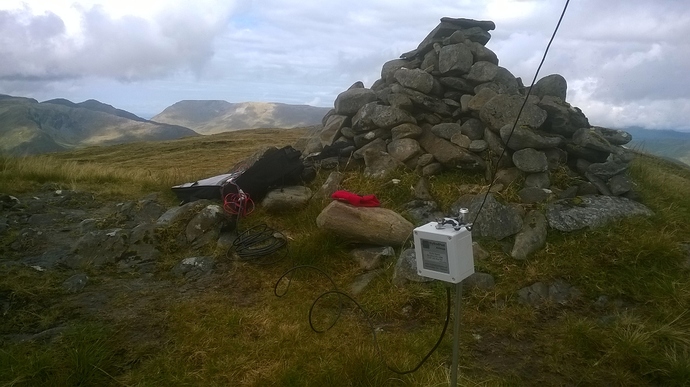 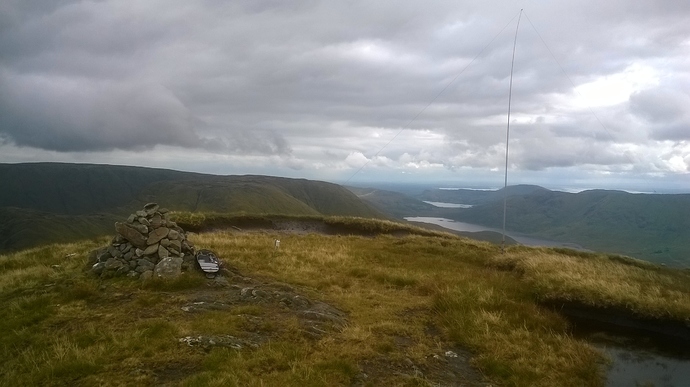 The ridge between Devilsmother and Maumtrasna is a fantastic walk. This is truly a desolate place, no tracks on the ground, just bog holes, rocky outcrops and nervous sheep. It took two further hours of hard going to get to EI/IW-016. Maumtrasna’s summit is an enormous boggy plateau extending over 1km with numerous local raised points, any one of which may be the actual peak, but all of which would easily meet the summit operation criterion. I picked the highest one of these I could access easily, while keeping an eye on my escape route down the mountain, should the weather close in. It seemed to take an age to get the requisite 4 qso’s on 20m. Number 2 was s2s with Franz, HB9EDU/P on HB/BE-153. He was struggling to get his quota also – band conditions were not good at all. I was number 3 for him. Sylvain, F4FWO was my number 4. I noted later that he had spotted me, but I was already packing up! After another extremely steep descent, I was back on the valley floor. I still had a tricky stream to cross with the radio on my back and it was with some relief and enormous satisfaction that I made it back to the car with the points in the bag, having not seen another soul for nearly 7 hours. 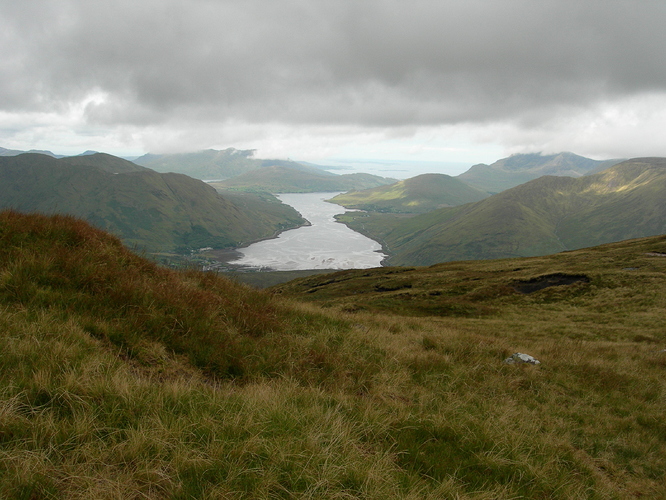 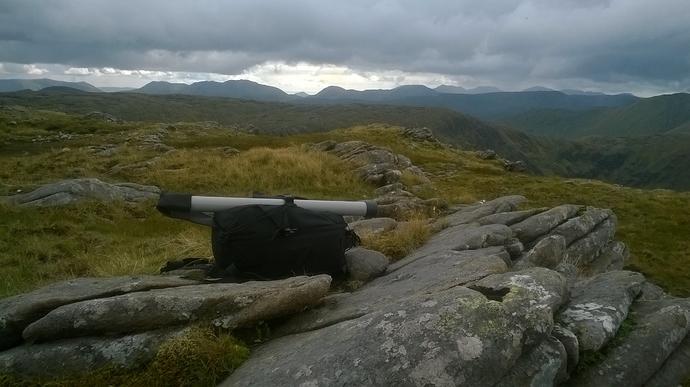 And so ends a successful month’s activating. I’ve learned a number of important lessons in terms of planning, equipment, operating and navigation, which I intend to put to good use. 42 points earned and enjoyed every minute even the failure on IS-028.

Dr OM John,
I enjoyed your story, many thanks for that. I discovered the windfarm construction near the entrance of Croghan Mountain and put that as information on 24/7/15 on EI/IE-013. Thanks to a good Irish friend who knew a farmer, I could go via the land of the farmer…
73 de geert pa7zee

But even the dipole has its limitations – for one thing the balun is a bit like an inverted pendulum in the wind!

Why don’t you take it off, then? Nobody bothers tvi on the summit. In case you have current on the mic line, a simple choke will cure it.