During a two week family holiday in Croatia I was able to activate 3 summits: DH-038, DH-059 and DH-078, the last being a Complete. Prior to the trip I had contacted Ivica, 9A6CW, for advice and he was extremely helpful. I was delighted that we were able to do a joint activation on DH-038 on 2nd July and afterwards meet up with his friend Ante, 9A8RA, for a post-activation lunch in Trilj, close to our holiday house.
L-R: Ivica 9A6CW, Ante 9A8RA, Simon GM4JXP 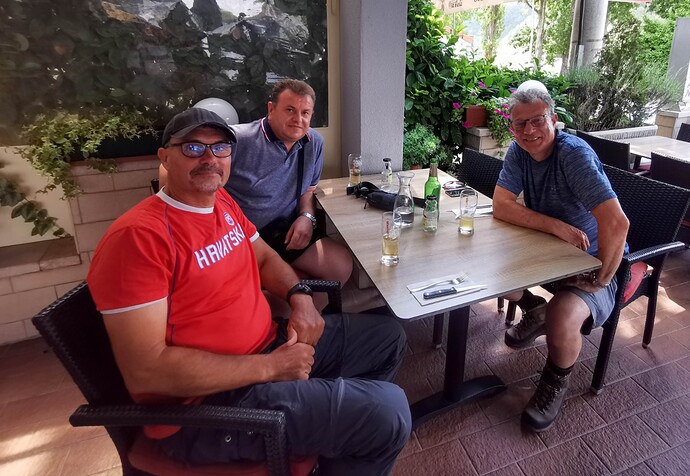 Logistics
I had planned on taking virtually the same kit that I used on my trip to Lanzarote last year, but my 857d failed a few days before the holiday, so I had to quickly organise an 891 as a replacement. This meant no 2m. I was also unable to get a 6m delta loop working to my satisfaction, so I ended up with a 40m dipole and delta loops for 20 through to 10m. The mast was a Sotabeams Tactical 7000hds. My 12Ah battery was no problem as cabin baggage (<160Wh) with Jet2 and went through Edinburgh security without problems. On the return flight, airport security in Split insisted (correctly) on calling Jet2 to make sure they were happy, which they were.
The weather was very hot for most of our stay (34-36C) which dictated early starts (0600 local) for walk-ups before it got too hot and several litres of water added extra weight to the pack. I also selected (with Ivica’s help) summits that had some shade at the top, but I took a tarp as well, just in case. As our holiday house had a large garden and no near neighbours, I was able to set up and test the gear on arrival and also do a bit of chasing.

Activations
DH-059 Visočica 4pts 30th June 2022
The starting point for this hill was about a 20 minute drive SE along the D60 from our base in Trilj. A dirt track heads up behind a Tommy supermarket(note that Google Earth is out of date - this shows a shop called NK Market) just before a road junction to Dobranje. There is also a large sign for a boules club just beside the supermarket.
Tommy supermarket 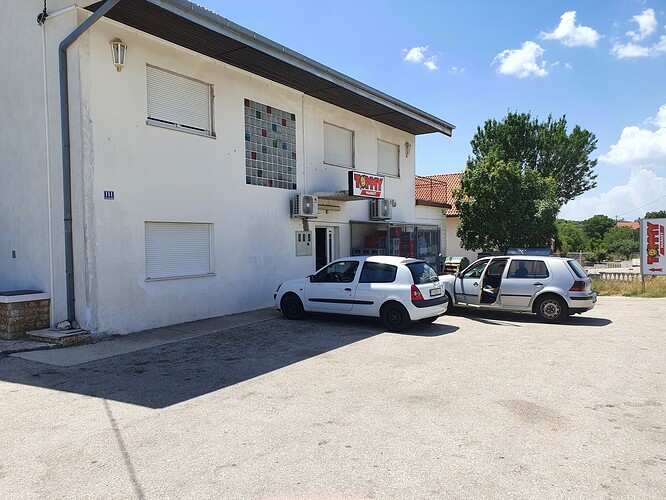 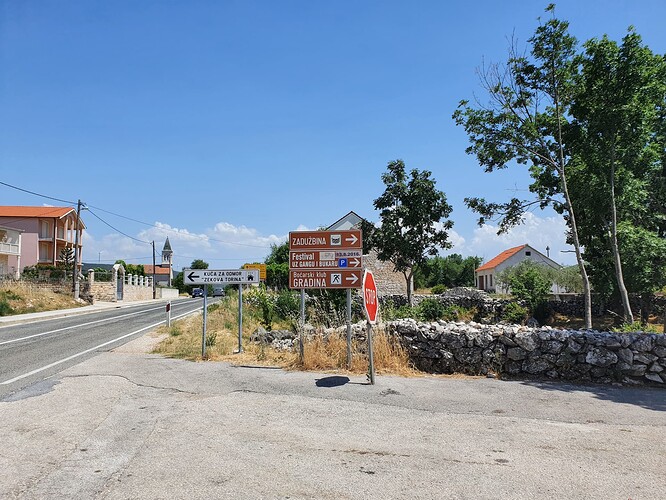 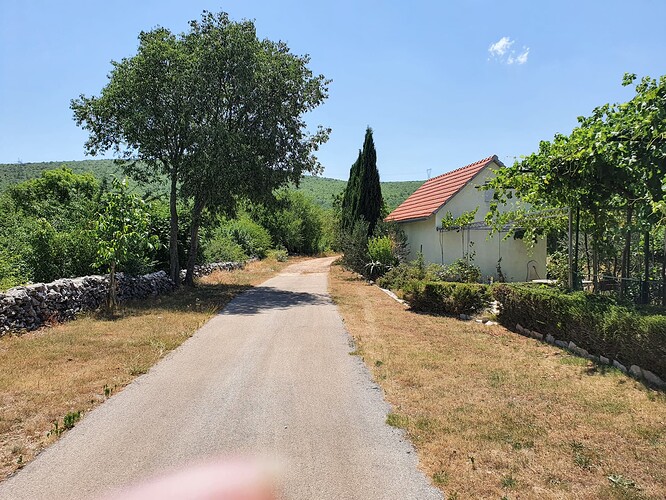 The track was drivable for a few hundred yards and I then parked at a junction, as it started to get more like an ATV track. The better track leads to a farm house, the poorer is the one to take uphill. 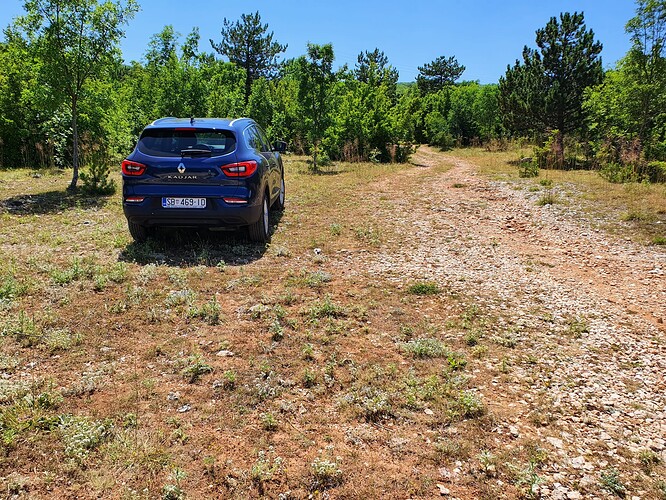 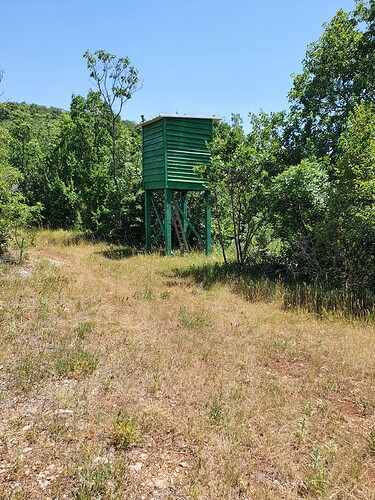 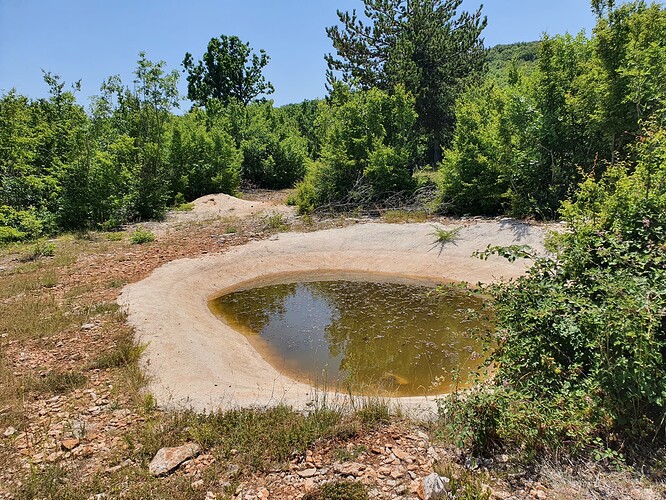 The track eventually dies out and you have to strike uphill, picking your way between bushes and trying to keep to clear sections. Basically, if you push through a couple of bushes and don’t see a way ahead, you need to scout around until you do find a clear way. 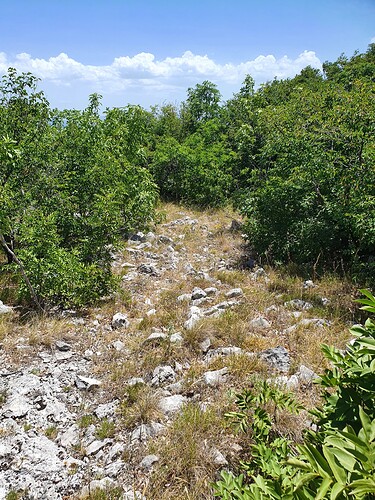 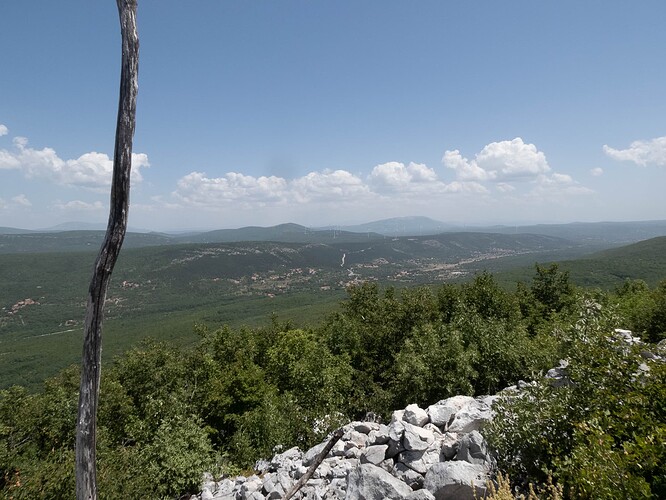 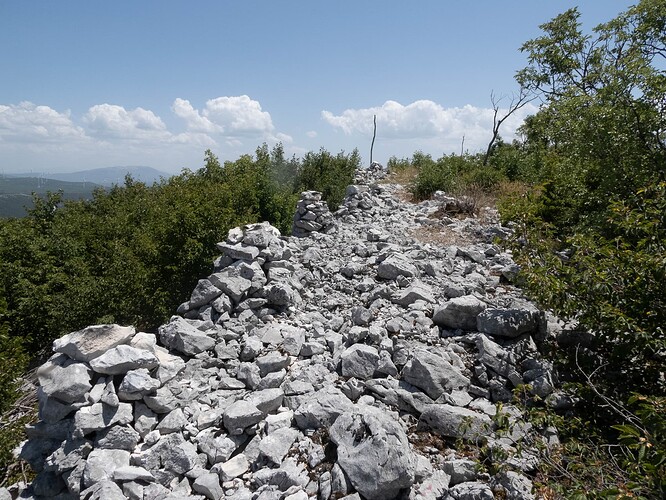 I set up just down from the summit, in a clearing with a bit of shade. 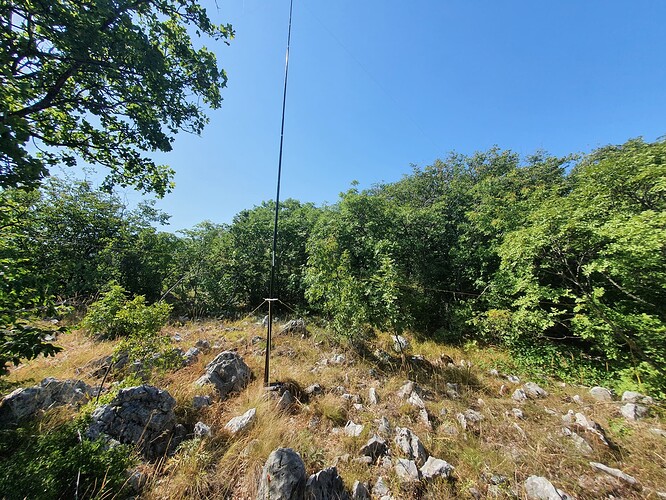 Finding a clear freq on 20m, I put out an SMS spot - which didn’t work

. After several more tries, I WhatsAppd Ivica to see if he could help and he immediately spotted me, even though he was at work by then - great guy! That got me going and I later figured out that it was a formatting problem - I’d used 9A instead of 9a. Should have done a pre-activation test.
Starting at last on 20m at 0653z, MQ0CGF was first in the log followed by a steady flow of EU chasers over the next hour, including one S2S with OH/LA9XGA/P.
40m brought a short run of 11, with 4 S2S including Phil DL/G4OBK/P, whom I had chased earlier in the week from the holiday house garden.
17m produced 11 EU chasers and then I moved to 15m which was open well to EU and UK and gave me 15 chasers.
It was now midday local and even with the bit of shade I had, the heat was getting too much, so I called it a day.
93 in the log, all EU including 5 S2S.

DH-038 Maglaj 6pts 2nd July 2022
For this one, Ivica had offered to lead me up for a joint activation. We met at 0700 local in the small village of Svib, which is about 30m drive from Trilj. Ivica then drove us up a narrow track behind the village for about 1.5km and then parked. 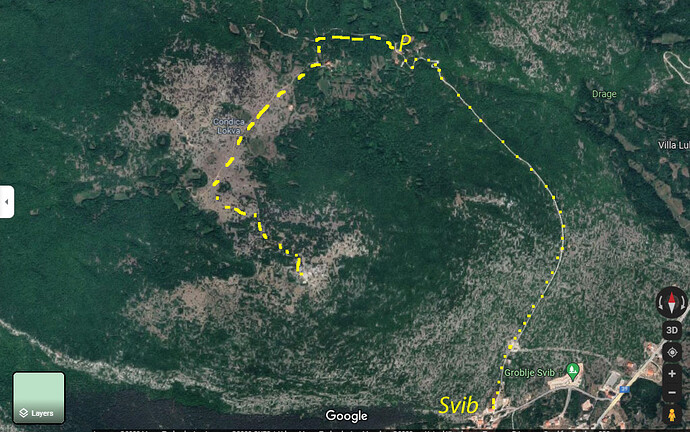 Final route up1022×640 184 KB
Just as we were about to set off walking, the most enormous flying beetle flew around us. It must have been about 6 in long and was some sort of stag beetle I think. Ivica identified it as a rare and reportable species. I think Croatia would be a paradise for insect lovers - beetles of all description, butterflies and moths everywhere, huge crickets etc etc. Prior to going, I had been a tad worried by online reports of mosquitoes being problematic, but I saw just one in the whole 2 weeks we were there.
After about a km, a low wall came into view, which was the trigger for Ivica to start to head up across the trackless hillside. It was basically the same routine as DH-059 - keep to the clear patches and push through bushes to find the next clear space. Altogether it took us about an hour to get to the top after leaving Svib. 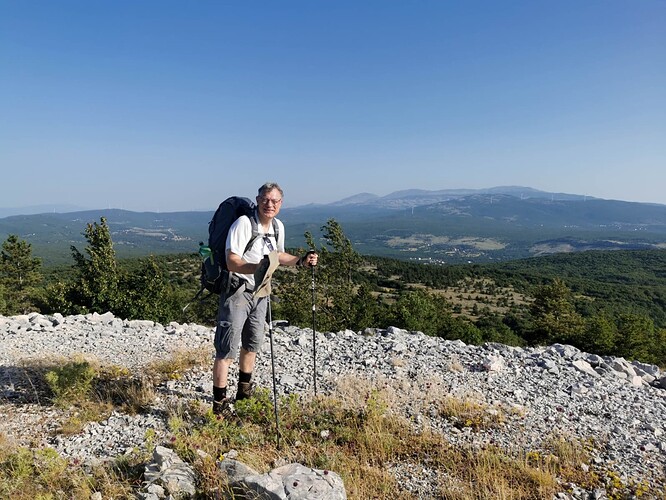 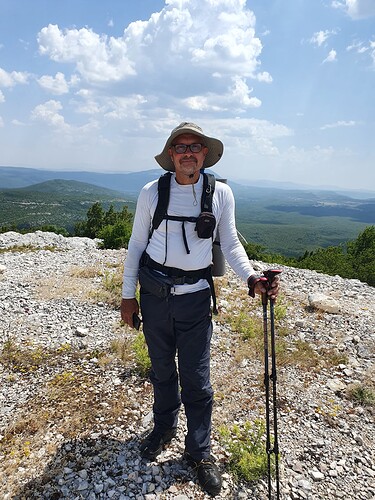 We dropped down from the summit to get some shade and set up about 50m apart. Ivica was working CW and planned to mainly chase S2S. 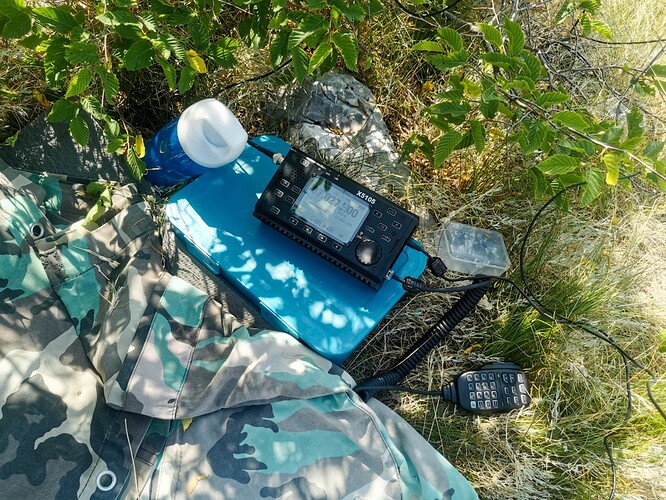 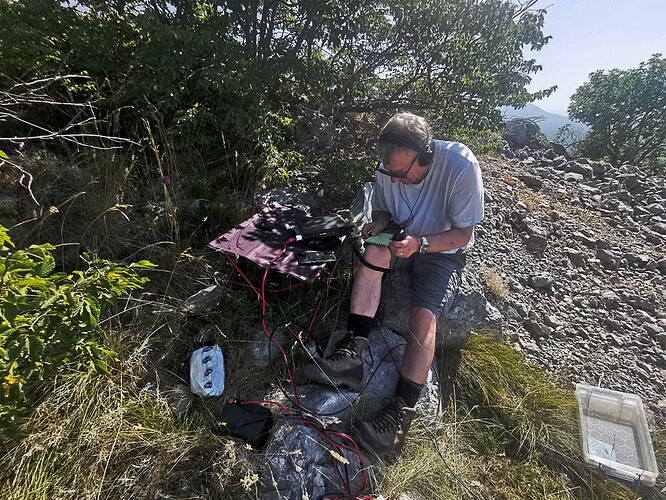 I started on 20m and Dinos SV3IEG was first in the log at 0628z. With EU still waking up, the log ticked over at about 1 QSO per minute. At 0641 I worked IM0FFM/P who was using 1w from Maddelena Is. Then Paul VK5PAS called in, giving me a 53 - his wife’s family was from Croatia so he was happy to make the contact. Paul was followed by Ron VK3AFW, who gave me a 33. Really nice to get VK in the log and easily best DX of the trip.
Switching to 40m, I got my first S2S of the day with E7/YU4MNO/P. 25 QSOs followed including two more S2S with IK2LEY/P and HB9BIN/P and a couple of G-land regulars M0BKV and 2E0FEH.
17m produced 23 EU chasers including a S2S with CT2GSN/P, plus RO9O in Novosibirsk
15m wasn’t very busy, with just 3 chasers in 10 min but these included Don G0RQL and Ante 9A8RA, a good friend of Ivica.
I went back to 20m briefly and picked up another 12 EU before going QRT at 1118 local. Both Ivica and I were feeling the heat by then.
We went back to Trilj for lunch and met up with Ante 9A8RA, who gave me his QSL for our earlier QSO - the fastest QSL I have ever received

DH-078 Trapošnik 2pts 9th July 2022
I originally planned to do this on the 8th, but the weather turned very windy with some rain, so I postponed things for a day.
This is the closest summit to our holiday house, only 10 min drive away and the path up is waymarked, so much easier than the first two. The track is signposted off the road from Trilj to Bisko and all the way up after the track peters out there are red and white markers painted onto rocks to show the way. 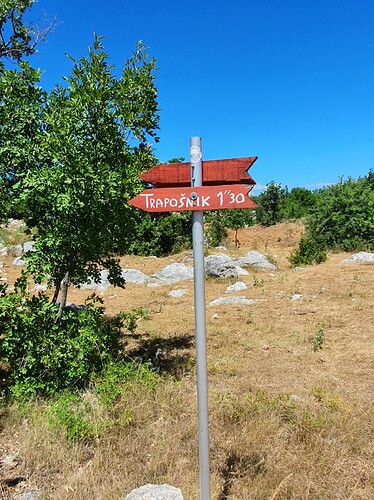 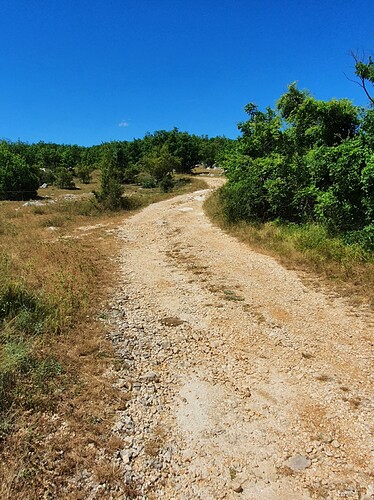 Just after a large barn with associated cows, the track has been blocked by rocks, but these are easily walked around. 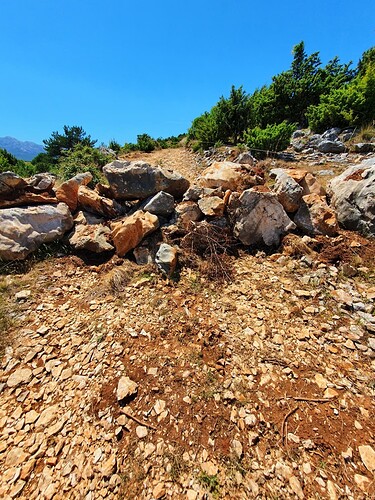 The summit is a relatively small area covered in large limestone blocks, with a couple of circular depressions built into the blocks as wind shelters.
Summit marker 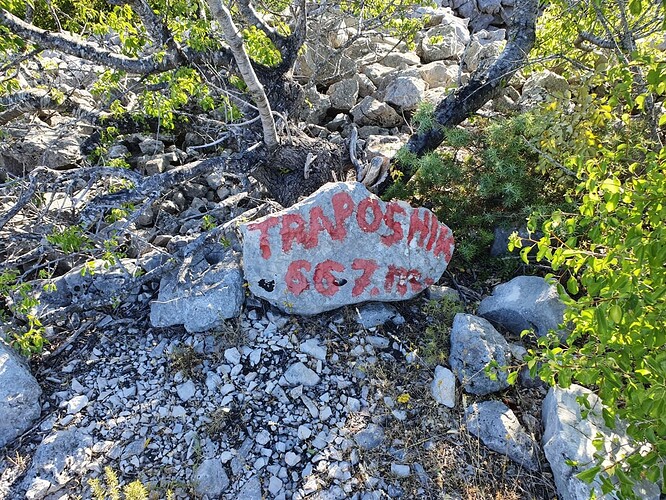 With little room to set up at the exact top and with a stiff NE wind blowing, I set up on the South side just down from the summit where there was also some shade. It was not quite so hot as my first 2 summits, with temperature around 28/29C and the breeze was nice. 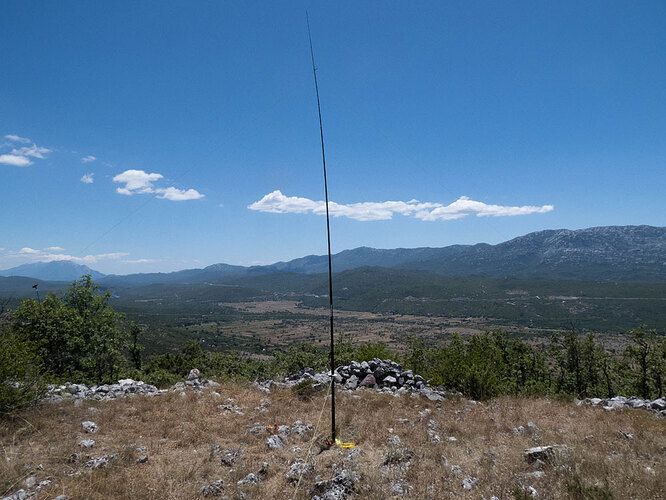 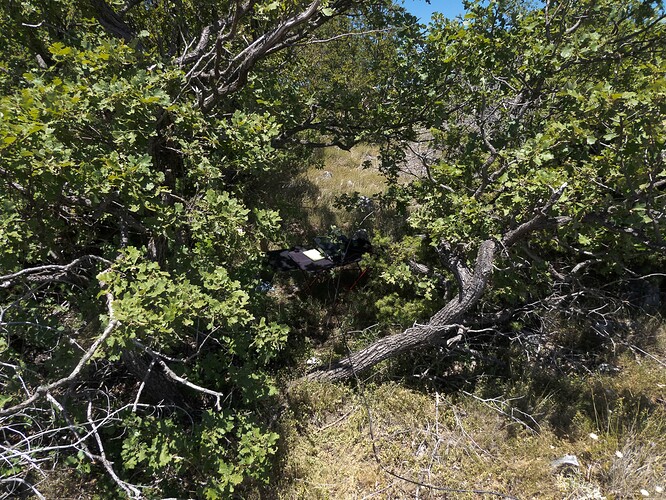 Start of way down, with red/white trail markers 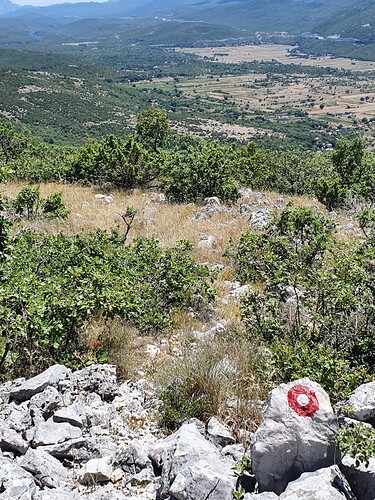 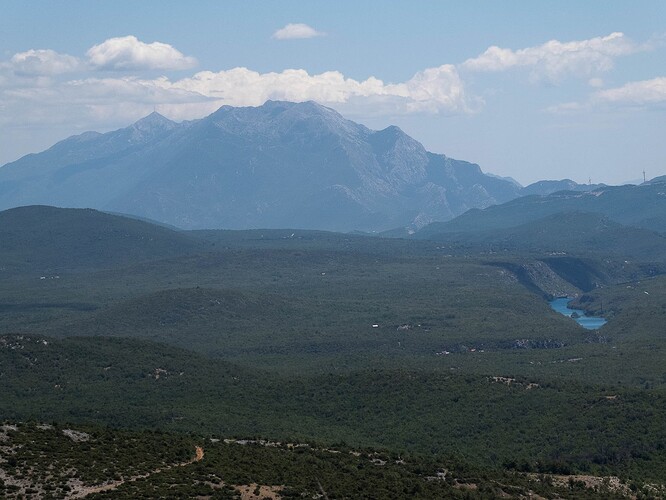 Thanks for sharing! What an amazing landscape!

Hi Simon. thanks for nice article…nice to meet you and see how others do it…
Thanks a lot and CU 73 !
Ivica

Great report and photo’s @GM4JXP Simon. It was good to chase you from two out of the three summits you did

Hi Simon, thanks for sharing your activation adventure.

Great to hear you had a nice time! Shame the days you went activating were all when i was working!

Sorry about that Karlo. Hopefully I will be back next year.