Good luck to all participants.

Nice to work you again Tom.

Maybe see you in the 70cm on Tuesday for the hat-trick if you’re about?

Pleasure was all mine Phil!

I’m not doing the 70cm UKACs at present - so that’s it for me until December!

Terrible night tonight - conditions were really awful - and it was bitterly cold for all us* truly outdoor operators too.

I was hopeful of some interesting activity with the forecast of the strong aurora. It seems others were too, many southern based stations beaming north more often and for longer than they normally do. Yet there was nothing. Nothing at all. Not even any GMs. I did hear MM0CEZ on SSB and CW - but he didn’t hear me on either.

The repaired T-bar connector for the Tracer battery worked without any problems, so that was good. There was another near disaster though - well minor inconvenience, however you wish to interpret it. I probably wouldn’t have mentioned it, but elsewhere on the internet today, I saw that Rob and Mike derive great amusement from my tales of woe, so this one is especially for you guys!

I arrived at the Cloudside parking area bang on 1900z and in good time for the contest. That was when I realised that I had not thought to pack a coaxial feeder cable to run from the SOTAbeams SB6 down to the FT-817. So I had to drive home to get it - and back again. First contact was recorded at 2008z, so I guess I didn’t do too bad. Hope you enjoyed that boys; thanks for the mention

Hi Tom,
I swung the beam around and took a listen for you last night when you were spotted on The Cloud, but nothing heard. Which I guess is not surprising. It would have been nice to get an E’s contact to you but even E’s are not performing yet (a bit early in the year I think).

Good on yer, for going out. Despite the conditions you seem to have bagged a few contacts but most imprtant had some fun!

Wow nice going Tom. Around VK1 I’d be lucky to make one QSO. I’m guessing in VK3 the QSOs could be close to four or five.

All relative though Andrew. 62 is not so good when “par for the course” would be around 90!

It was also of course the UK / EU activity night / contest on 6m, so that helps rather significantly!

The forecast is relatively good for tonight, though I’m sure I’m going to need my gloves! I’ll be out on a summit, all being well, for the 6m UKAC. I would be very happy to take calls from SOTA chasers at any time, though you’ll have to search for me as I won’t be self-spotting, due to me also submitting a contest entry. S2S very welcome of course - if anyone else fancies a bit of night-time January SOTAing!

There is now a FMAC from 1900 to 2000 UTC before the main contest, but I’m not anticipating a great deal of traffic on that! Three QSOs might even win it in the QRP section!

Thanks for the QSO and points Tom. Great to work you as always. I packed up just after 22:00. New stations were getting very thin on the ground by then and the Chinese takeaway was beckoning.

Fairly poor conditions last night I thought. The FMAC was bobbins - I worked only GW8ASD in the whole hour. I fear that extension provided with the VX7’s helical antenna, for use on 50MHz FM, is little more than a dummy load. I’m thinking of making a triple (approximately) sized MFD for 6m FM - maybe without the plastic tubing!

In the main UKAC, I made 62 QSOs, mainly SSB with a couple on CW.

The descent was fun - freezing fog had filled the valleys all around The Cloud - so it was like a scene from a Harry Potter film!

Worth a look here Tom 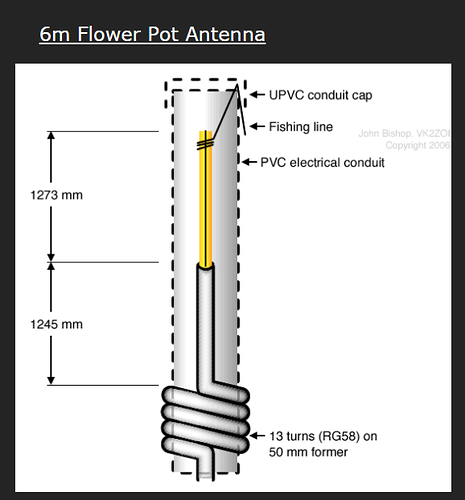 You could use a bit of plastic tubing for the choke to hold the coax in place, but could easily suspend the top of the antenna from a fishing pole! Then once finished you could roll it all up and stick it in the rucksack.

I believe SOTAbeams used to sell the RuckSack Special on 2m - based on this design.

Anything will be better than a rubber duck!!!