The forecast was for a mostly dry day with some cloud and sunny intervals. Temperature control ended up being a problem with biting cold wind but occasional bright warm sun with the added variable of some steep climbs and awkward terrain.

We wanted to do Cairnkinna Hill as a complete for both of us and hoped to do Fell Hill as a unique later. We had two possible routes for Cairnkinna but it looked like parking could be tricky for the more attractive walking route, and as we drove down the narrow single track road we couldn’t see anywhere obvious that didn’t block either gates or passing places, so continued on to the little disused quarry at NS787005 where there was plenty of space.

From the quarry there is a track that looks like it is going to head into the woods, but soon degenerates into a mass of brash from felling combined with replanting making hard going. After a while we spotted an area of fence filling in broken down wall just above the track so we headed through young trees to it to cross onto the open hill, though there were a few more trees to be negotiated before we could see the steep slope ahead. We slowly toiled our way up the slope heading slightly left until the gradient eased and we came to a fence that was easily crossed. We had plenty of pauses to take in the views of the green and pleasant Scaur valley. There was then a pleasant ridge walk, picking up an ATV track heading roughly towards Burn Head and leaving it where it started to drop to head right to follow the ridge line to Cairnkinna with trig point and enormous cairn, picking up another ATV track along the way, which made for easier progress. There were good all-round views. 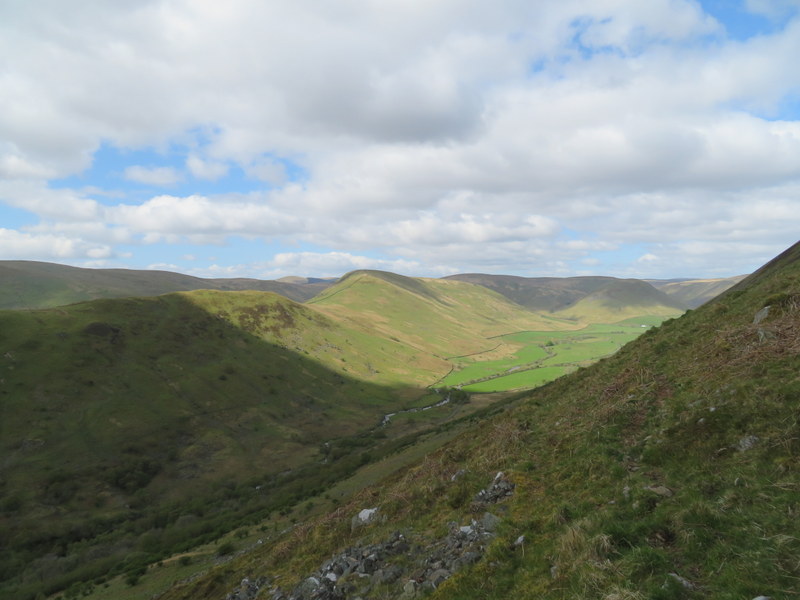 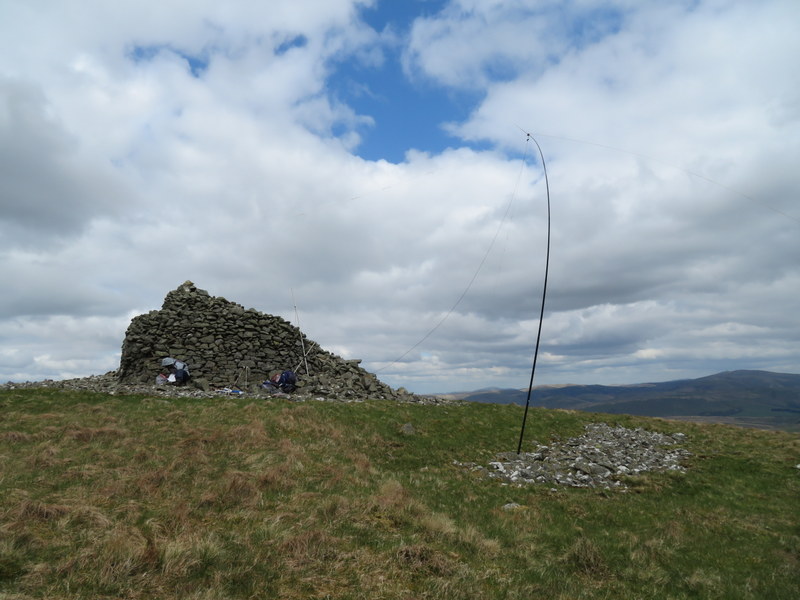 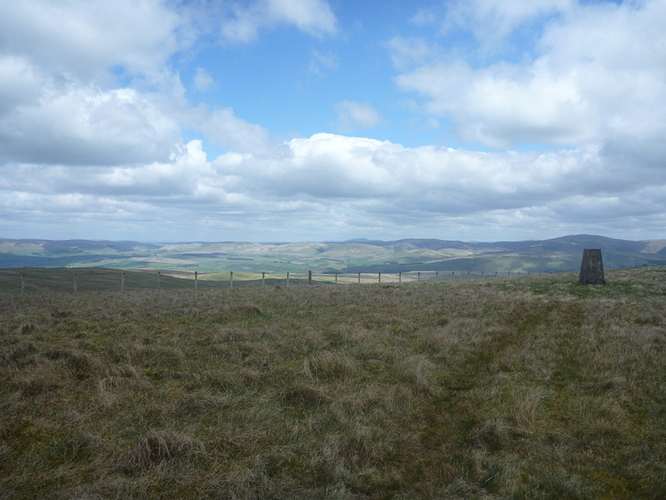 It was windy at the summit, so we attempted to use the massive cairn as shelter, Caroline trying to get the VHF antenna poking over the top of it as far as she dared. However initial calls yielded just one contact. Martyn set up HF not too far from the cairn, enabling him to get the radio close enough to the cairn to get some shelter. 60m yielded 9 contacts for Martyn over a quarter of an hour, after which Caroline took over HF with 7 contacts. A return to VHF produced 3 more contacts so VHF qualification was achieved. We then noticed a 20m spot for Andy GM8OEG on GM/SS-076, and both managed to make a difficult S2S with him, after which Martyn managed another 2 20m contacts but couldn’t quite get the report back on a 4th so we had to make do with having qualified the summit on 3 bands between us.

However, as we descended, we realised that perhaps we had spent too long on the summit, as time was looking too short to do Fell Hill which was a unique for us. So the choice was either to find a walk that didn’t involve a summit, or do Wauk Hill which we had done previously. Caroline had bad recollections of the route up Wauk, involving lack of views and getting snagged on nasty barbed wire, and hadn’t bothered to properly research a better route as we hadn’t anticipated doing it again. A quick google suggested a variation on our original route might be easier, so as previously we parked in the small layby near a gate around NX823905.

This time we got the views but ended up with a horrible fight through fallen trees in attempting to avoid the barbed wire. On the previous occasion we had headed to the south of the woods on Maxwelton Hill, but there were suggestions that it was possible to get through the wood, so we headed that way and found a gate to climb over. However after an initial more open area we got entangled in a mass of fallen trees, struggling to negotiate ourselves and poles through it. Eventually we emerged the other side to a muddy and rough area which had been churned up by cattle in the field, we picked our way carefully north and the east round the second woodland area - newly planted. We then had a much more pleasant section picking up an ATV track following a wall east to the summit. This time we had views and were now accompanied by many orange-tip butterflies, so our mood improved. At the summit the trig point was the other side of the wall in a more heathery area more exposed to the wind, so we set up on the same side as the track, Caroline propping the VHF antenna by the wall. 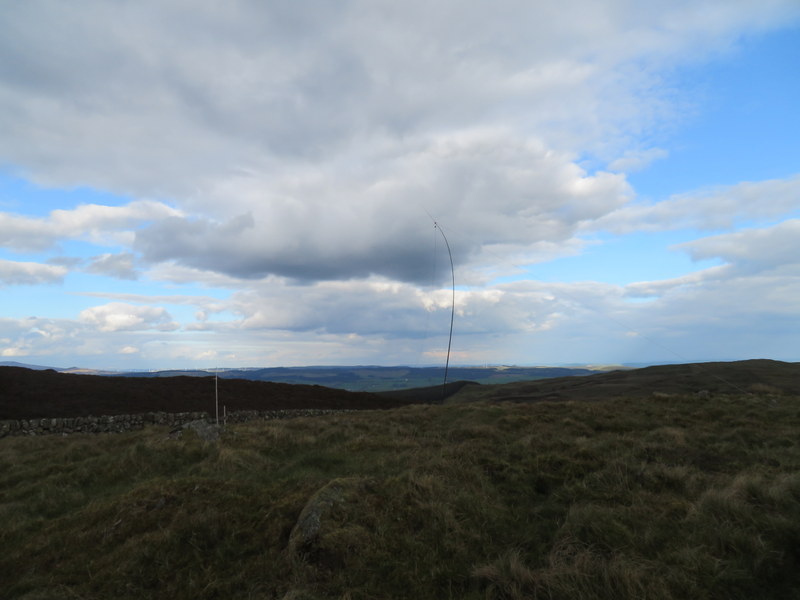 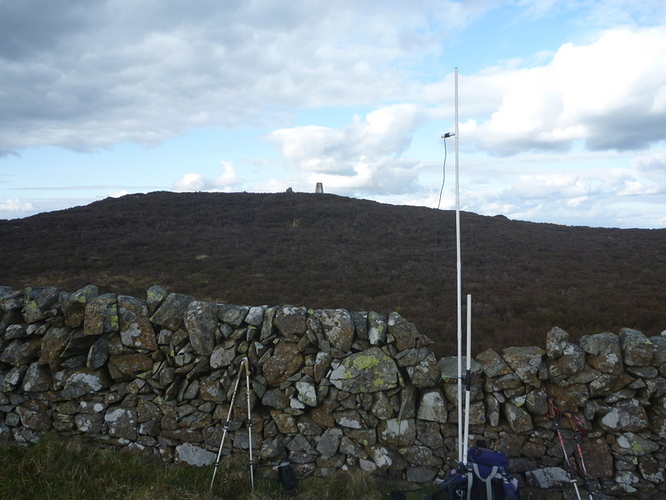 We didn’t have much time and radio conditions weren’t good. Caroline failed to raise anyone on 2m FM, but Martyn managed his 4 qualifying contacts on 60m in about 15 minutes, but then no more. Caroline then tried 80m but got stuck on 3 contacts after 15 minutes. In desperation she tuned down to 3.760 (our 80m antenna not matching that well at that end of the band), and there was the WAB net. In a gap she announced the square, and back came Jake G1YFF from the Cambridge area, soon to be followed by an exchange of squares with another 5. Thanks, WAB!

We tried a different route through the trees on the way back, hoping that the barbed wire at the north end of the wood might be negotiable, but it wasn’t so we ended up with a similar struggle through the edge of the woodland until we got to the gate and could escape to the relatively easy descent where we spotted some orchids on our way back to the road. 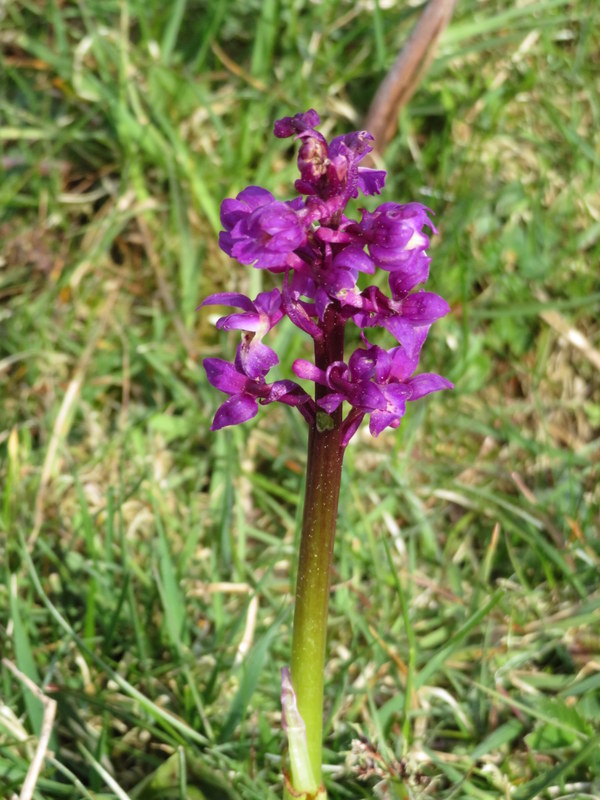 Excellent activation info, thanks for the photos as well. With any luck I’ll be able to avail of the info some day.
Many thanks,
Frank
EI8HIB