Geoff M0PYG and I decided to finish off his six remaining NPs this week. On Tuesday we drove from Scarborough to the Cumbrian village of Dufton to tackle Dufton Pike. This started off as a relatively flat walk along a lane then after going through the kissing gate, comes the steep ascent along a track to the summit. The weather was reasonably kind although we couldn’t see the neighbouring summits of Great Dun Fell, Little Dun Fell and G/NP-001 Cross Fell as they were covered in mist. We had taken hf on this one as this little fell can be difficult to qualify on 2 metres. To our delight we managed 8 contacts including GI4ONL and MIORTY on 145-fm and we managed 10 contacts between us on 7-cw/ssb. On the footpath we saw several very large brown hairy caterpillars. We then set off for Buttertubs Pass ready to tackle the more challenging Great Shunner Fell. The weather had deteriorated somewhat and we donned our waterproofs for this very boggy walk. It was hard going and we met a walking group on their way down and at the summit we met a walker brewing his tea at the shelter. Unusually this shelter has the trig point attached to it. We managed 10 contacts on this one using 145-fm including distant contacts in Doncaster, Sheffield, Runcorn and Sutton Coldfield. The descent was much better as we could see a better path on the other side of the wall down from Little Shunner Fell. The weather had improved so we had a very pleasant journey back to Scarborough.

On Wednesday we set off for Ingleton via Harrogate as Sutton Bank was closed for annual road maintenance. The journey over was a bit of a nightmare hitting the rush hour around Harrogate and Skipton. After a couple of navigation errors we eventually found ourselves on the right road to the parking spot for Great Coum. We turned a bend to find a farmer on his quad bike behind a flock of sheep with two dogs ensuring that the sheep kept moving. Although this held us up somewhat we were more than happy to watch these dogs doing their work. When they all reached the field the dogs ushered the sheep through the gate then promptly jumped up on to the quad bike as if to say job done! This road has four gates on it between Ingleton and Dent. A lady in a vehicle behind us said that if we opened the gates she would close them. We reached the junction with the path and we met a man in a landrover coming down who said that we wouldn’t get very far along this track and that it was private anyway. So we parked up and began the walk. He was right the track was worse than the walk across the moorland to the summit of Great Coum. My previous visit to this one was with Phil G4OBK when he activated his last NP. The weather was kind and we had great views all around. We had 8 contacts on 145-fm including s2s contacts with G0HIO/P on G/LD-019, G7OEM/P on G/SP-014 and MW6BWA/P and MW0JLA/P on GW/SW-016. After having our snack in the car we continued on the track to Dent and then on to Cam Houses Road via Hawes. Even more gates for Geoff to open and close on this one. We parked at Kid How Gate and the short ascent went well and we reached the trig point with the usual small moat around it. Only 7 stations worked on 145-fm on this one with a distant contact with 2E0TOP in Bromyard, Herefordshire. Spectacular views of Ingleborough and some of the other Yorkshire Dales summits on the way back. We came back via Thirsk stopping off for a very tasty Chinese meal.

Thursday was to be our last easiest day and it turned out that way. We drove to the cattle grid in between Buckden Pike and Great Whernside. This walk up to Great Whernside was quite tricky early on with a large area of boggy ground to negoitate before the climb. Once again the waterproofs were required and the weather at the summit was absolutely awful. As we had left the umbrella in the car so we left the high powered rig in the rucksack and used the VX7R and extended antenna and worked 6 stations on 145-fm. We were glad to get off this one as it was raining and very windy on the summit. After a quick snack at the car we had the journey to Rombalds Moor. Geoff was driving behind me in his car so I was navigating and driving and after several stops and many wrong turns around Silsden and Riddlesden we eventually reached the car park near the small pylon. We walked about a hundred yards or so up the path and set up by the wall. We had 6 contacts on 145-fm and then Geoff left for his long drive back to Malvern very happy that he had finished off the NPs. I stayed and worked 17 stations on 7-cw but only one G0VWP in York on 7-ssb. Most of these contact were with European stations. 10-cw brought in only 5 more contacts and I had no luck on 14-cw so decided to call it a day. I then loaded my gear into the car and walked to the trig point as it is well paved now and I met another walker that had come up from the Cow and Calf near Ilkley. It was a hectic three days with a lot of driving but great fun on the radio and Geoff christened his new callsign. Thanks to all the chasers.
73
Nick G4OOE & Geoff M0PYG 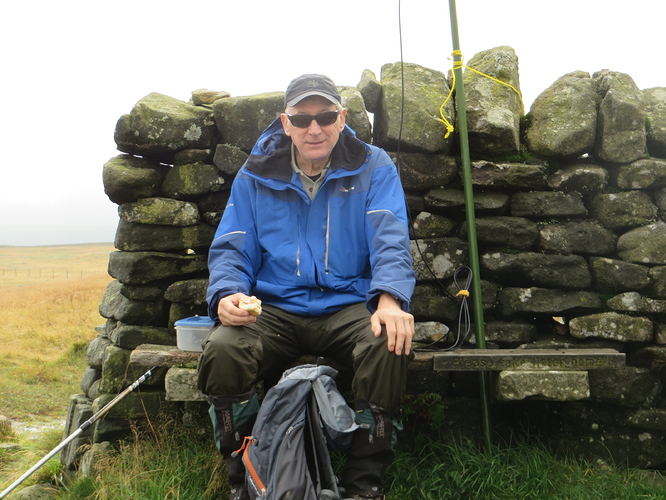 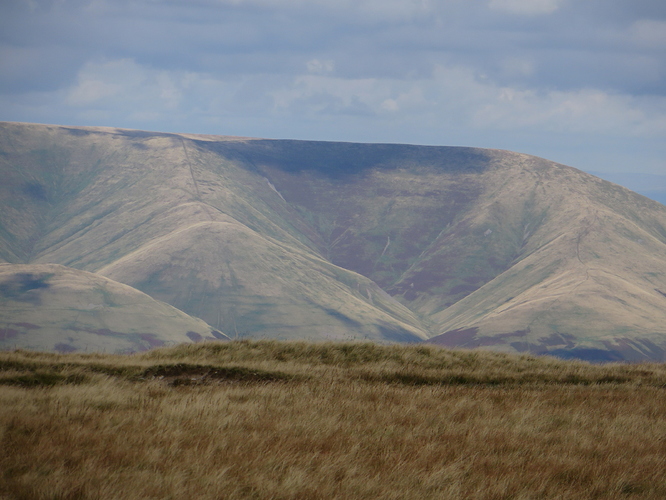