It looks a lovely morning tomorrow, but only two alerts on for Multimode Saturday. Has the novelty worn off already after two sessions?

First priority tomorrow will be 2m CW, then SSTV, but I dare say AM, FT8, SSB, FM and C4FM may feature at some point.

so won’t be out tomorrow.

However! I will be out on Monday as it’s a bank holiday and I had forgotten about that. Probably GM/SS-167 so there will be SSTV opportunities if anybody is out.

I’m still getting my kit together but will give it a try soon. A 2m Yagi arrived last week and a Surface tablet should arrive tomorrow for digital modes.

But is the intention the event will go on for a few hours? Just in case I sleep in?

Of course being in the SW I’m a bit out on a limb but reaching South Wales might be possible.

Looking forward to it!

I’ve popped this on the main SOTA Facebook group to try and boost interest from both activators and (mainly) chasers. Mostly to warn folk to be capable of it later in the year.

I’ll probably also post on Reddit and the amateur radio thread on Something Awful too - there are a fair few SOTA folk on both of those.

I’ll get it on Twitter tonight under a few pertinent hashtags.

Calling on SSTV now. Last mode of the morning.

This morning’s results from The Cloud G/SP-015:

I overheard several walkers telling their hiking buddies that I was “testing the weather” today. I’m not even sure what that means. Some much more sensible walkers simply asked me what I was doing!

A drive out to Wincle microbrewery later on resulted in an unplanned jaunt up Gun G/SP-013 for a second activation of the day. This was just using the handheld and rubber duck but still netted 4 QSOs including one S2S: G7HEM/P on G/WB-004.

I would like to try from down here but I’m not quite ready yet. My Surface Go tablet was supposed to have arrived today but seems have been delayed. If, assuming it is delivered.

I can get it talking to the radio I can try FT8 from a summit - plus other modes of course.

I’m planning on a more conventional activation from G/DC-001 tomorrow morning but this would be a good place to try 2m from. The much more accessible Kit Hill has transmitters on it.

Here’s a question: If this kind of thing was easier to do on handhelds because of a ready-made interface that wasn’t OTT for something you may not want to do forever, would people be interested? Especially if holding a HT up to a phone is too much of a pain. I just ordered a PCB version of that circuit I’ve been using and they’ll arrive soon. I’ll have spares… Cost me £6.85 for 5 from JLCPCB. 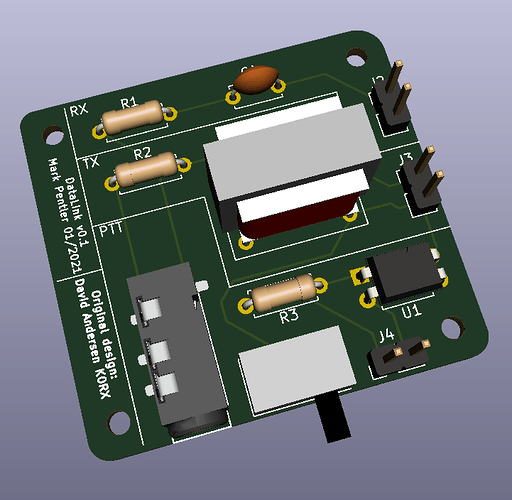 It’s for 2-pin Kenwood jacks and you’ll need to supply cables. I cut the mic off a cheap Baofeng mic for mine and that cost me a fiver. But If I can find a cheap source of those cables then great. But also those cables look hard to make up if they don’t have the 2-pin jacks on, and I have no real kit for doing that myself.

You also need a TRRS lead (which I think means it’ll work with laptops AND Android phones/tablets?). I just bought one of those off Amazon for a fiver, which was a bit much. Total cost all in is probably £15 instead of the £30-50 quid ones (Easy Digi?) But those come in a fancy box.

There is an optocoupler for USB-to-Serial control too, but I won’t be using that so I have implemented a hard slide switch for TX as on the prototype.

People, get into making PCBs, I’m still addicted to it and I have learned so much.

Edit: on second thoughts Easy Digis are cheaper than I thought.

Tonight’s activation will be 2m FT8. Anyone fancy trying for a S2S? It seems like it’s going to be a pleasant evening round here.

I’m getting there… slowly.

The Surface Go 2 arrived yesterday - only three days after the “Guaranteed next day delivery”. I’ve so far only loaded WSJT-X as I was distracted by a rotten fence in danger of being blown over. I’m hoping to try it with the radio tomorrow and if that works the only reasonable weather window down here for a test in the field this week, so to speak, is Friday morning. The weekend is looking a washout.