2m Activation and Failed Attempt to Reach the Lake District!

I was on Kit Hill G/DC-003 this morning to see if I could hear anything of the Lake District Activity weekend. Sadly I couldn’t! I could see a few spots on 2m FM but nothing was heard down here. This wasn’t a great surprise but I think it was worth the effort of trying. I had hoped to use a 45W linear PA but the unit which arrived was faulty and has been returned so I was restricted to the normal 10W.

But as I did the activation anyway here is a very short report.

I used the 10 element Yagi antenna again and despite a strong breeze at times it stayed up. I must be getting better at guying it! I have also modified the mount so it can be turned to horizontal or vertical polarisation very quickly without having to remove it. This saved a lot of time. 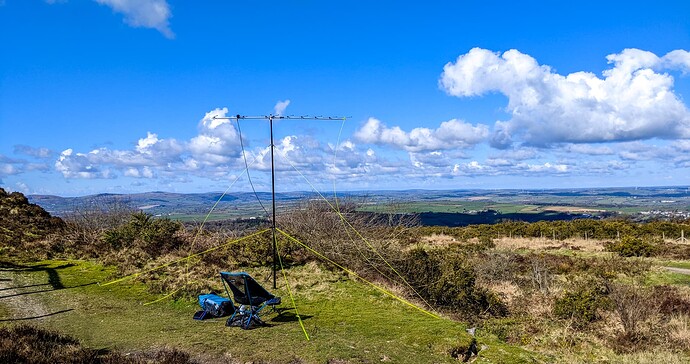 2m FM was very quiet with only Don G0RQL replying but I had more success on 2m SSB before switching to 2m FT8 and another 4 QSOs. I was on the north side of the hill to give me the best chance of reaching the LD so it was no surprise that the PSK Reporter Map showed no hits on FT8 to the south of me but I was pleased with the results to the north. Many thanks to all chasers! It was cold despite the sun but I suspect those in the Lake District were suffering more than me. 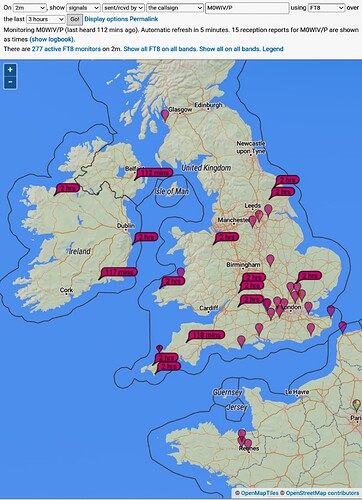 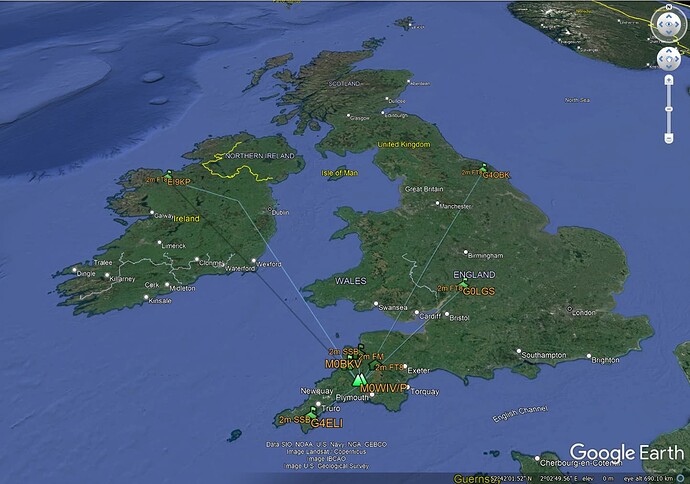 However, I’m not convinced Kit Hill is the best summit for VHF. This screenshot from the IC-705 shows repeating bands of some sort of interference every 50KHz. I couldn’t hear anything but this QRM can’t help. There is a mast on the summit with numerous antenna, some are for pagers apparently, I’m not sure what the others are for. 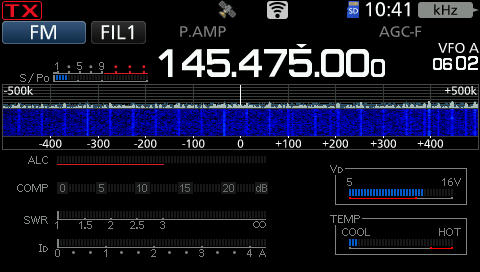 I listened on FM (not much chance) and SSB (worked summit once before) but didn’t hear you on those, but thanks for the FT8 QSO.

I must try again to reach further north on FM - but from a summit with less local QRM.

There was a bit of a magnetic storm today but I don’t think that should have had much impact on VHF.

Nothing heard on 2m SSB when I listened. Some won’t thank me for saying this - “THANK GOD FOR FT8” (LOL from one of the SOTA CW Cognoscenti!).

Some won’t thank me for saying this - “THANK GOD FOR FT8” (LOL from one of the SOTA CW Cognoscenti!).

There’s no doubt FT8 is, if you have the kit, a reliable mode for SOTA activation these days. On HF it’s very easy but on 2m less so but as today showed it can be done.

I was tempted to try CW towards the end of today’s activation but I was out-voted by my fingers who said they were feeling the cold!

Some won’t thank me for saying this - “THANK GOD FOR FT8” (LOL from one of the SOTA CW Cognoscenti!).

That’s really strange. My 705 showed exactly the same bands around 8pm last night at my home QTH in Wigan. Nowhere near any masts.

And that was indoors on a Diamond RH770 …

if you have the kit, a reliable mode for SOTA activation these days.

Very good John. Yes I have the kit and I enjoy operating DATA modes from home, as weel as the so called “legacy modes” HAHA LOL… however I cannot be bothered carrying the kit for FT8 up a hill as I believe there is enough equipment in my rucksack to satisfy me. As well as FT8 thank God for Lithium batteries!

Every credit to you though for doing DATA from a summit, also thanks to another regular DATA guy on HF, HB9HCI who was seen and worked on screen today on 20m FT8 on HB/BE-153. In recent times on at least 6 occasions, I have been unable to resolve Andreas signal in Yorkshire on 20m FT8, purely down to propagation. Today though he was a fine -04 SNR, could be a sign HF condx are changing as we move towards springtime and a few more SOTA outings for me I hope.

Phil, thank you, the only extra kit I have to bring is the MS Surface Go 2 tablet but at 1150g including case and BT keyboard it isn’t as light as I would like - which is why I’ve only used on summits which are only a short walk!

Hi John,
Correct me if I am wrong but I believe our 2M CW QSO at 533km exceeds the range of all the FT8 QSO’s.

May the Force be with you. A message from the Dark Side there is!

Also is the 50 kHz comb due to a switch mode PSU at your location, it may be supplying auxiliary power?
Out tomorrow on Burnhope seat G/NP-003

Also is the 50 kHz comb due to a switch mode PSU at your location, it may be supplying auxiliary power?

David, I was running on a battery so I think I can rule out the power supply.

And yes our CW QSO was longer than the FT8 ones on this occasion but my QSO on FT8 with F6BQX on the day of our CW activity was very slightly further I think - but it wasn’t S2S of course.