We did this hill on our way from the Blackpool Rally to a holiday cottage in Thornhill.

We parked on the verge of the minor road to the Daer Reservoir near the junction at NS972096. As we were preparing to set off, we saw the only other people we would see on our walk coming down the reservoir road which formed part of the Southern Upland Way. We set off along the reservoir road, turning left off it soon after crossing a bridge to follow the line of the Southern Upland Way on the map. In retrospect this was probably a mistake as it was quite hard going on rough ground with little sign of a path passing round the edge of a woodland and then angling uphill across a field. When we reached the wall on the other side of the field, we spotted a SUW waymark the other side of the wall which implied that the path was the other side of the wall and had been from much lower down. There was no way to cross the wall there, so we followed the wall uphill until there was a gate. The wall turned into a fence which was followed all the way to the summit.

It was a lovely day with blue skies and fluffy clouds and we had views to the Lowthers and across the Dear Reservoir to the south and west, and north to an extensive wind farm. Our ascent had been accompanied by the sound of curlews and lapwings, which were joined by skylarks at the summit. Lark accompanied activations are good! The fencepost at the summit provided a support for the VHF antenna, and the grassy top had plenty of space for the HF antenna. Caroline struggled to three VHF contacts in 20 minutes, but calling for another half hour couldn’t produce a fourth, so she moved to 40m after Martyn had 12 contacts on 60m. 11 40m contacts for Caroline were followed by 3 on 80m. 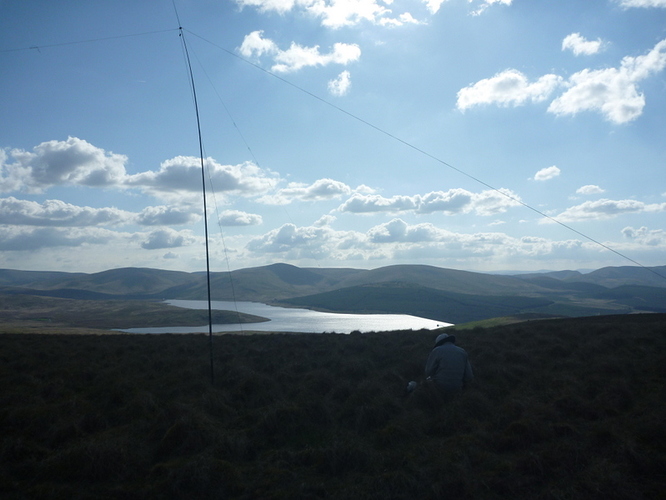 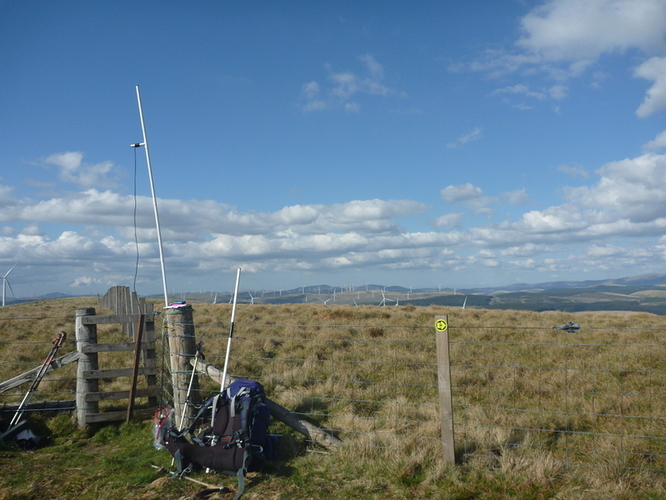 On the descent we followed the SUW waymarks which took us straight down the southern side of Sweetshaw Brae with good views of the Reservoir. It was steeper than the ascent route, but on better ground, though the final descent to the waterworks road was slightly awkward with a narrow path along a fence line. Down on the road there were more SUW waymarks, so it looks like it has been officially diverted from the mapped route. There are large works buildings, but it had an air of once having been even bigger with what looked like the remains of a children’s playground.

Gerald will no doubt have a better recollection than I, but your description of the ascent and descent is very reminiscent of our own activation of this one back in Feb 2014!

Bog on slope when I did it. Take a frogman suit is my advice.

Gerald will no doubt have a better recollection…

Indeed Gerald has the activation report to hand…

The route up this hill is notoriously boggy and wet. Jack GM4COX had suggested that we use the track up by the wall from near the head of the reservoir, but in all honesty the ground did not look that bad to us, so we decided to try the more direct approach. The weather also seemed to be brightening up and the sun briefly showed its face a couple of times during our ascent, which seemed to be into the wind on this one, though with the gusts it was difficult to know exactly which direction it was coming from. After coping quite easily with a patch of Galloway type ground (fortunately not the real thing), we reached the wall and trudged our way up the waterlogged path to the summit, which we reached at 13:45, three quarters of an hour ahead of schedule. Unfortunately, the ascent was not particularly enjoyable which to some extent marred the enjoyment of this summit.

I can’t recall whether we got on the correct side of the wall, but if we hadn’t then I too would probably have recorded the fact and the rating would have been more severe than just “not particularly enjoyable”. Let’s just say this one is not on my possible returns list. Goodness knows why Jack went back… 3 times! No-one else has!

Many thanks for the report Caroline. The photos are exactly as I remember the summit though perhaps it was a little drier for you. There are also similarities in respect of operating on VHF…

Meanwhile, after putting out numerous calls on 144.333MHz, I decided take a check on the beacons which revealed GB3ANG was booming in, but there was no sign of GB3VHF. Would there be any activity locally on FM? Thankfully Bob GM4XHH in West Linton was monitoring the FM calling frequency, so at least I found out that my kit was working, but there was no-one else around. Back on SSB, I was called by Mike GM0OAA at 12:02 and turning the beam at him produced 59 signals both ways. After signing with Mike I was surprised to be called by Iain MM3WJZ/P on Minch Moor GM/SS-133 – another mad soul out on a hill on a day like this!

I spent quite a lot of time calling, but still nothing was heard from south of the border. I tried again on FM and Iain called in to show he was copying me okay on that mode, but the illusive fourth contact was not to be had. As if to add insult, a band of sleet then passed through making it even more unpleasant. Having completed his activation, Paul ascended to my position at around 12:35 and on hearing my tale of woe, persuaded me to drop down to his position to make a couple of contacts on 7MHz. Frank G3RMD, John G0TDM and Brian G4ZRP were holding station on 7.118MHz and kindly obliged with contacts. I could have set up for 10MHz, but the conditions dictated that we get off the hill as soon as possible - so we did.

History repeating itself or what? 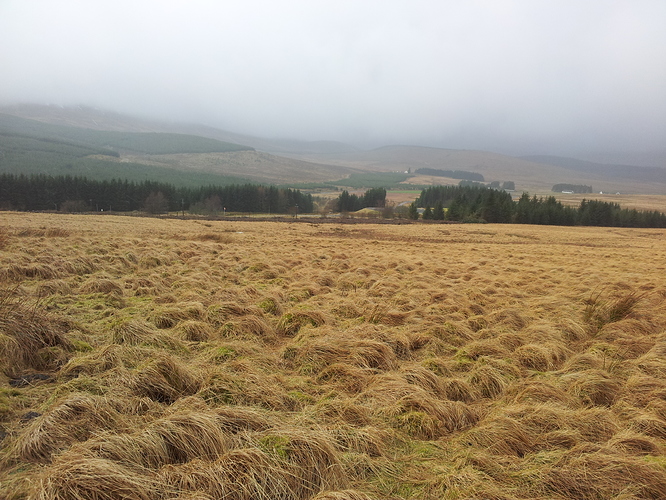 History repeating itself or what?

Certainly in respect to the lack of VHF activity. I think the fact that we had decent weather made it more pleasant for us, and although it was wet in places and rough at the lower level it wasn’t too bad. We’re unlikely to repeat because of our preference for uniques, but it didn’t come into our “never again” category (but later in the week we ended up repeating one of “never again” hills because we didn’t have time for a unique!).