The better photos are available here

Stuffing the free SOTA pass granted by my wife firmly in my pocket I set out for Place Fell, a 4-pointer at 657m, on Sunday morning - the cold snap in the Lake District continuing with temperatures at dawn around freezing. With only the motorbike for transport all thoughts of grandiose (Great Gable is on my list before the end of the year) were put aside and I settled on a return visit to Place Fell - a firm favourite from my previous experience last year.

On my way up over Kirkstone Pass I took a quick snap of the low-lying cloud above Thornthwaite Gap. 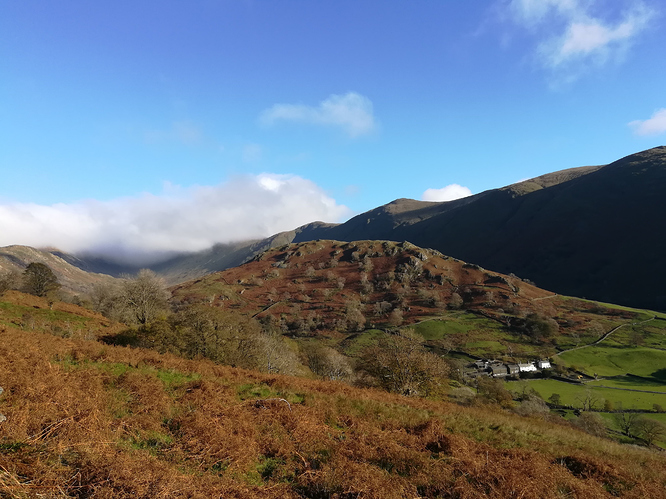 On a motorbike it is easy to find a parking space in the Lakes! The track up from Rooking is steep but not punishing and turns 1/2 way back on itself for the continued ascent up the well defined path and steps in places. As the summit stone came into sight I was treated to a brief snow flurry, the first snow to fall in the Lake District this year.

After a brief benchmark-mark selfie I did a little investigation for a suitable spot in which to get out of the biting easterly wind and with enough flat terrain to support the 40 metre wide dipole. 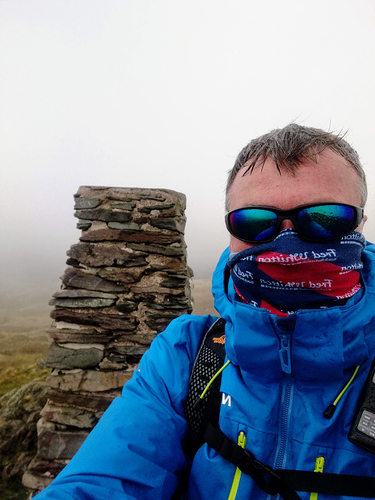 First up coffee and enjoy the view! Low cloud was skirting about 700m and obscuring the 8 and 10 point SOTA summits. I’ve said this before but the number of quality fells visible from this location is great. From Blencathra to the north, Helvellyn, St Sunday Crag and Fairfield to the West round to Red Screes and High Street to the South, not forgetting the westerly flanks of the North Pennines to the East, you really do get a 360 degree vista. Blencathra seemed to be bathed in sunlight for most of the activation and I noticed one and then several paragliders braving the weather soaring around the westerly flank of Blencathra.

I put the Slim-G antenna on top of the 10m SOTABeams compact travel mast at about 45 degrees pointing into wind so it was self supporting when lodged in the rocks.

The faithful chasers, John in Penrith G0TDM, Geoff on an excursion to Carlisle (back into G land) G4WHA/M and Sue G1OHH were all good to hear although Douggie G7CDA couldn’t hear me from this location.

I was then joined by walkers settling down for a sarnie, including Smurf the Alsatian cross, so delayed putting HF up both because I’d get 100 questions and also because the wind was predicted to wane after 12pm. I was also ready for the predicted sunshine for a bit of warmth. I took the time just to admire the fells to the West and Ullswater below. From my position to the westerly side of Place Fell I had Patterdale and Glenridding at my feet. After about 20 minutes the walkers left and I decided that the wind had backed off enough to get HF up. 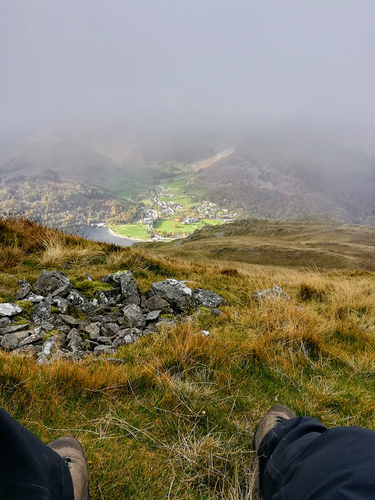 Settling on 80m as the only probable band I’d work SOTA chasers today due to the continuing CQ WW SSB contest I was surprised to find the terrain and angles meant that the Sotabeams Quadbander was also self-supporting without the need for the guy rope - I was expecting a battle with the wind! So with a stable antenna I spotted on 3.610 and was pleased to work a number of the faithful UK chasers who were as keen to work me given the lack of SOTA activations, and especially on the uncrowded 80m band. Compared to the day before skip distance was definitely reduced (the antenna was the same reduced height) and only UK stations were worked. 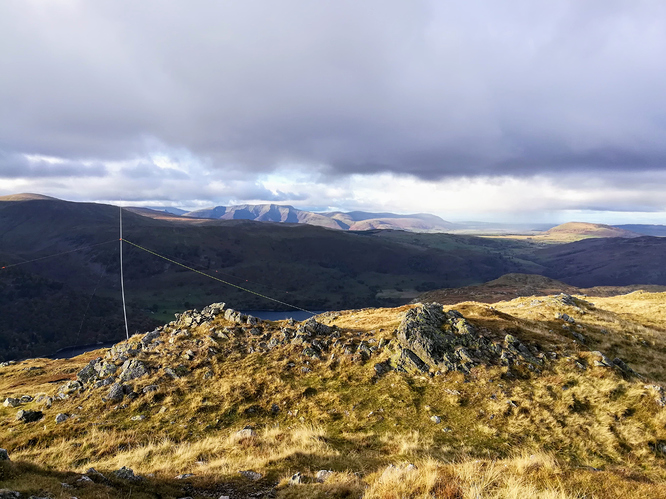 I re-clipped the quad-bander for 20m with a spot for another activator on that band but the frequency was crowded and no copy made. I decided then ‘in for a penny, in for a pound’, moved right right up to 14.350, put the MCHF SDR filter to 1.9Khz BPF and then tried to work the CQ WW activators sequentially scanning down the band. To my surprise I was getting through nearly every time on the first or second shout and you could tell some stations were surprised at the /P suffix. In a little over an hour I managed to work 42 stations with some very exotic callsigns and had a long run of American contacts. 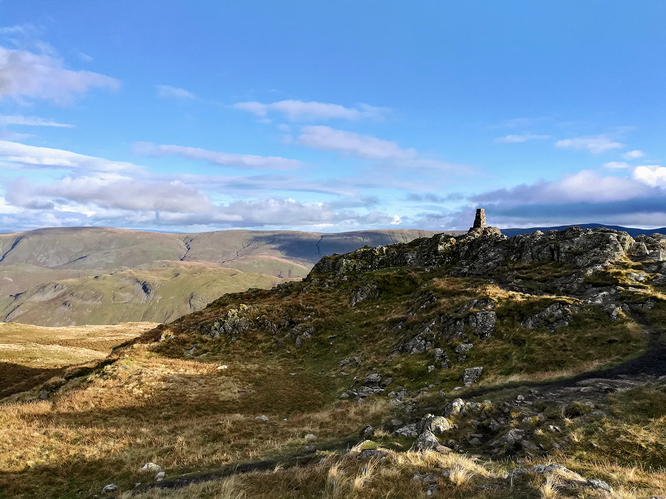 After this I re-clipped for 80m just for one last shout out and was happy to get Phil G4OBK, Allan GW4VPX and Nick G4OOE in the log before packing up. I asked Phil why we only hear these booming stations when a contest is on - surely these folk use their radios outside contest conditions? I find it strange, but maybe there is a lot of effort required.

Looking North I noticed several isolated showers working their way in from the East (including a spectacular rainbow underneath one) and decided maybe it was time to get going.

The descent was magnificent as the time-adjusted sun was already starting to creep down towards Fairfield. The photos really don’t do it justice. 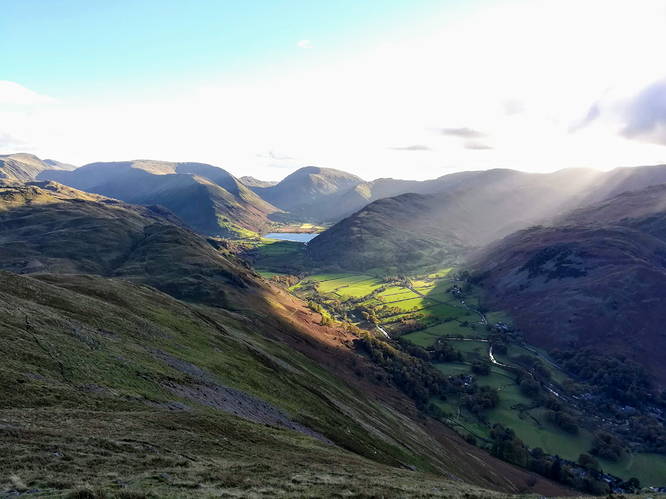 Another great day on the fells, as always thanks to the chasers and yes I do feel very lucky to have such spectacular scenery on my doorstep!

Easy. They call CQ. Far too many people are licenced listeners. i.e. they turn on, tune about, hear nothing exciting and turn off. Then they complain the bands are dead.

People need to go on the air and call CQ a lot, lot more.

Thanks again Mark for the activation & pics,lovely views.73 Don.

Far too many people are licenced listeners. i.e. they turn on, tune about, hear nothing exciting and turn off.

A lot of these stations are contest-only and don’t get powered up between the major events. I heard one guy on 40m commenting on the size of another’s signal. 2kW out to a 4 element beam came the reply. Hmm, just the thing for a SOTA outing!

Many thanks for the excellent report and photos Mark. It is interesting to see Place Fell without a white cloak on it - one of my computers has a view taken on the way up on its desktop. 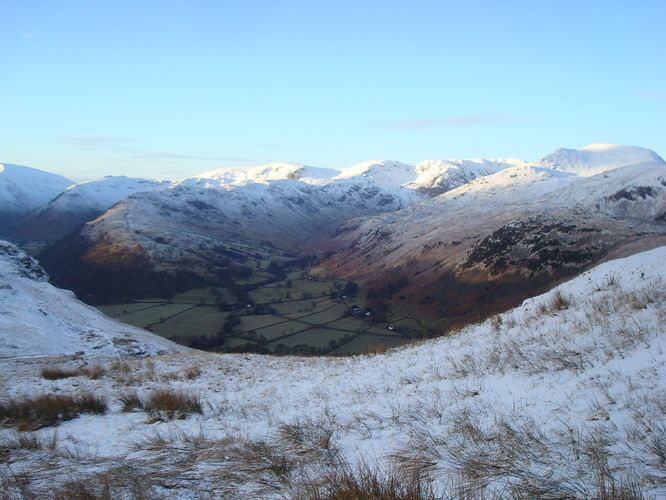 Unfortunately I had my head down chasing some rare prefixes yesterday and failed to see you were QRV.

Activated Place Fell in the summer, from Martindale. Lovely quiet path with car parking starting from Garth Heads. I will do it again!
Thanks for the brilliant report.

Great report again Mark. Coincidentally this was one of my options for today (until my wife announced that she hasn’t brought a hat or any gloves

️ Sub zero temperature forecast). Oh and she wants a lie in!

Hi Andy. Maybe next time! Hope you enjoyed the lie in too!

Thanks for the summit and points. Great report and pics as usual. Thought I’d missed you but really pleased you returned to 80m. It was cold when we were there but the views made up for it.

It’s a nice summit. I did it a while back and was later joined by Tom M1EYP on a damp, grey day. The views were nice then but not as good as either Mark or Gerald’s.