I have just alerted for our activation of Snaefell at 09.00 it on Saturday morning. I will have 23cm capability with me. Because of the nature of the band (and having a reasonably pointy antenna) I was wondering if anyone had plans to be chasing/activating? It would give me an idea of where to point.

Thank you for the heads up! I’ve alerted for the Wrekin G/WB-010 at the same time.

It looks as though there is a fairly clear path through the Cheshire gap, but I will be using the basic PCB antenna again. I’ll find out whether the TV transmitter upsets the SG Labs transverter in any way.

Having bought a few bits of semi rigid mini coax (for the balun) at Norbrec, I now have all the components to build a yagi. I just need to make jigs for cutting the elements and drilling the boom.
Painting and decorating this week, though…

Snaefell also has a number of masts on the summit so I’ve also no idea if I’m going to have desense problems as well.

I’m aware of at least one home based station that might be looking for me so hopefully conditions will be favourable.

I’m hoping to be in a suitable location - it may be 23cms FM rather than SSB though.

I don’t have 23cm but I have passed onto John GW4ZPL who will listen for you on that band he will be vertical only. Maybe catch you on 2mtrs later in the day.

Hello Carolyn. Thanks for the info. of your activation of Snaefell, Saturday morning.
I have only 2Mtr/70cm. FM. Sorry, no 23cm. Is there a chance you may operate 2Mtr. FM? If so, please let us know, the sooner the better as I will need to travel to high ground, ( 30 mins. from my QTH.).
Many thanks, enjoy your day. Paul M0CQE.

I will be using both ssb and fm on 23cm; horizontal first then I will try vertical fm for a short while. Primarily I will be on 2m ssb but depending on conditions and the weather 2m fm will be used at the end of my activation.

Currently sat in the oldest pub on island just about to have steak and Guinness pie. Hopefully the weather will be better tomorrow as it has been wet here all day.

Many thanks Carolyn. Weather here in Oldham has been very bad today. Constant rain, Poor visibility and Cold wind. I hope for better tomorrow. If there is any chance, I will be out listening for you.
Enjoy your evening meal, sounds great.
Best Wishes. Paul M0CQE.

Carolyn, I’d love to try something on 23cms but sadly cannot get out on Saturday. I’m fairly sure that Scald Law SS-125 to Snaefell is viable with a 1W FM handy if it has a bit of antenna (23ele Tonna) applied to the job. SSB should be a doddle. But sadly I cannot come and play. Hope you can make 4 QSOs on 23cms.

I hope I can make the four contacts too Andy. It would be the first time for me to qualify a summit on 23cm. Sorry you couldn’t come out to play.

I will try to get the 23cm setup in to morning. Here is the path profile for 23cm with 10W at my end.

Thank you for all your efforts on the IOM and for giving me GD-002 for a full set which had been missing for awhile due to work & missing the activations.
I have a small confession to make…My ZL Special for SSB is still in the attic on a dodgy rotor. So that is why I always sounded so pleased when I worked you on SSB. Looking for a second hand rotor so I can get it outside. Thanks again and get back down that pub for another pint. Hope you had a great Holiday.

I received a few “pings” via aircraft scatter from you (really big Fedex commercial flight) but couldn’t work you
Shame, that would have been real DX for 23cm considering the power you had available (I’m in IO87)

Sorry to those who had gone out to look for me today on 23cm and were not able to make contact.

I was suffering from some qrm from the masts on the summit when beaming south.

I did qualify the summit, for the very first time for me, with 4 contacts; 3 on ssb and one on fm.

Sorry again to anyone missing me. Conditions on the summit were right on the limit for me activating!

Now avoiding the showers in the summit cafe warming with a bowl of tomato soup before the walk back down to the bungalow.

Hi Carolyn, thank you for trying, it was worth a go. I didn’t hear anything from you on 23, but thanks for the S2S on 2m.

I managed two contacts on 23cm ssb, John GW4BVE and Stuart G0LGS. I had to null out the noise from the TV mast, which was a harsh white noise S9 + except in the surprisingly sharp nulls provided by the PCB antenna.
I had foreseen a problem, and set up in a position where pointing at GD also provided a null.

So, I learned that the Wrekin probably isn’t a good choice for 23cm. It looks as though the 2nd harmonics of the 10KW ERP digital TV MUXs on 634 MHz and 658 MHz might be to blame.

I managed 11 QSOs on 2m SSB, this being the first time I’ve taken a yagi with me (4 ele Tonna), which was very encouraging too!

A photo - very much Heath Robinson, the 817 / transverter is sitting on a table based on a microphone stand, and the 2m antenna is just perched on the tree. Improvements on the way 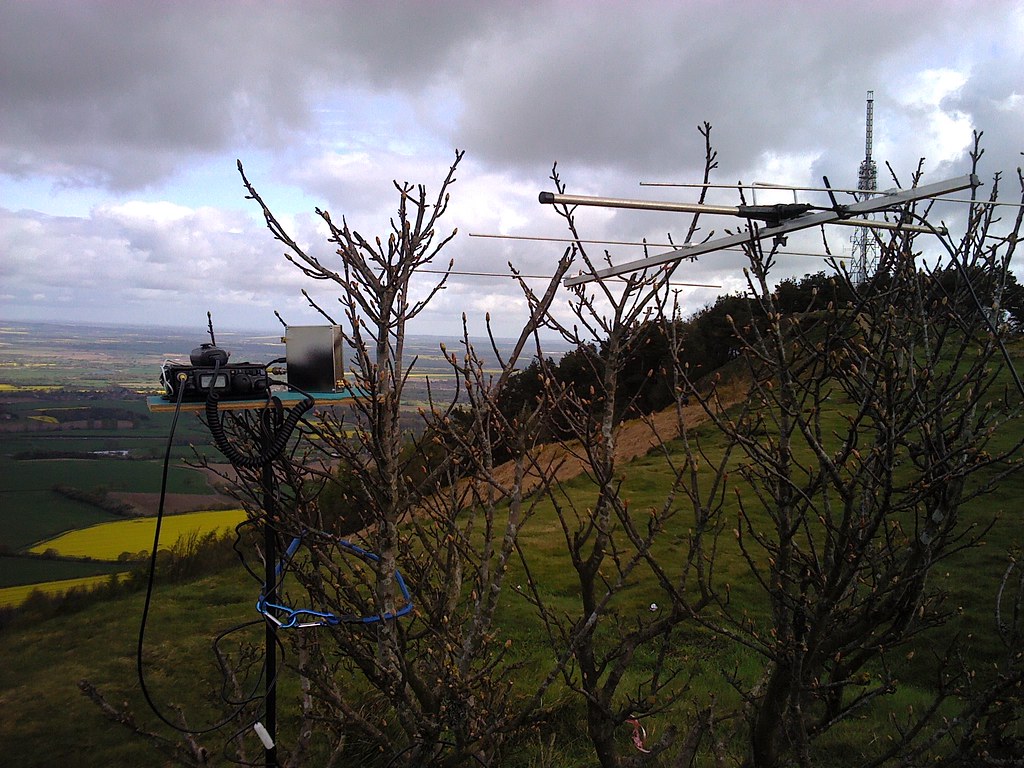 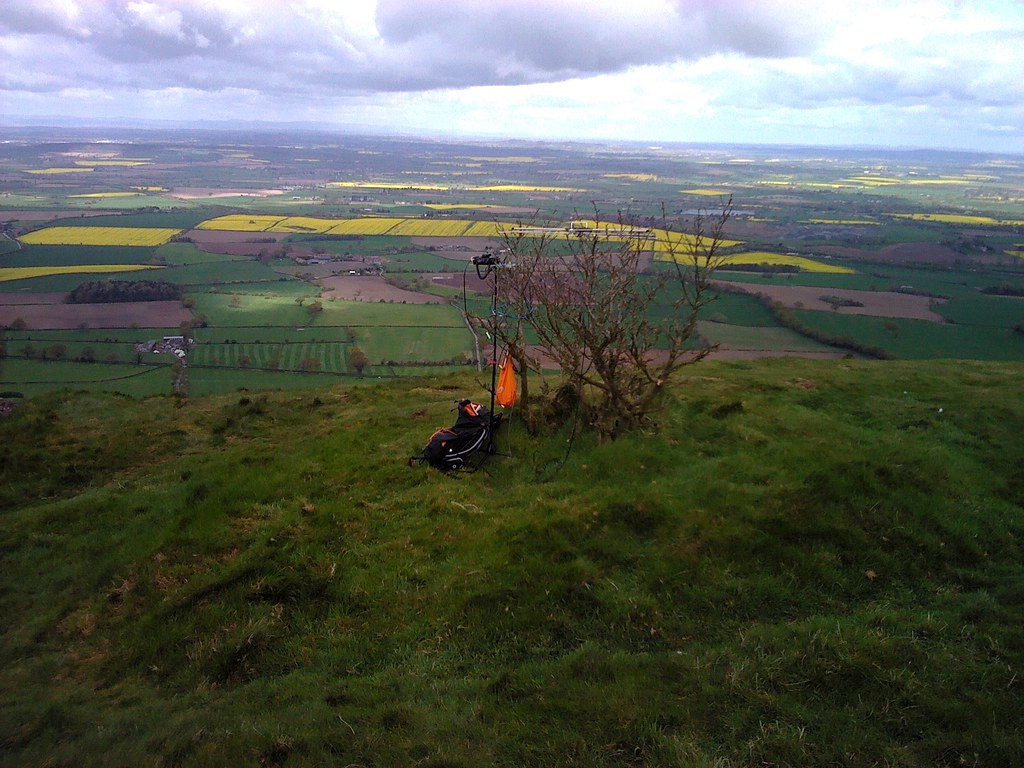 That 10kW maybe the average power. DVB is massively peaky, Rhode & Schwartz suggest a typical DVB-T signal can have a crest factor of 35dB if not for digital processing where it is limited to 15dB. That makes the peaks on 650MHz at 300kW ERP. Now luckily for us Baofeng do not make broadcast transmitters so we can assume the 2nd harmonic is what, 60dB down, which means there will be wideband 300mW ERP signals spread over the 23cms band just a few metres from your antenna. It doesn’t matter how good your radio is, a 300mW in-band, wideband signal is going to flatten your receiver.

Now luckily for us Baofeng do not make broadcast transmitters so we can assume the 2nd harmonic is what, 60dB down