The weather forecast was for a reasonable day but with the possibility of some rain, so waterproof trousers were chosen again. We were earlier to rise, so decided to go for the two previously unactivated Grahams in Strathconon GM/WS-245 Beinn Mheadhoin and GM/WS-231 Meall na Faochaig. We only had a short section of A road before taking the single track road from the western end of Contin which meandered down Strathconon. We parked up on the verge of the road where the track to Inverchoran left the road.

Beinn Mheadhoin looked the more challenging walk, so we decided to go for it first. It proved to be more challenging than we had thought. We headed down the track towards Inverchoran crossing the bridge with deer grid over the river, and soon saw red deer grazing in the field. Having passed a sign saying how walkers were welcome in Strathconon, we were somewhat put out to encounter a sign prohibiting access to the bridge needed to cross Alltan Sgeireach to the path we wanted. We spent some time trying to find an alternative route to the path we could see on the other side of the river, including contemplating a ford, but the river looked too fast flowing and deep to safely cross. We followed the stream closely for a while, but concluded that it was just too wide for a safe crossing, so reverted to a track through woods following it at a higher level. When that track became blocked by fallen trees we made our way back down to the stream, but still could not find a safe crossing point (though those with longer legs might have more luck!). We were now very hot as we fought our way over difficult terrain following a faint and intermittent path. Eventually we found a point where the stream split into two and managing to cross one arm headed up the hill to eventually pick up a boggy track heading south, which came to a crossable ford where we could join the track we had wanted all along, but it had been slow going. Not long after the ford we forked right onto a path heading WSW up the flank of Beinn Mheadhoin. The path went further than shown on the map but eventually faded so we had to make our own way up the mixture of rock and boggy vegetation. The summit was marked by a cairn on one of the areas of exposed rock (which had pools and areas of boggy vegetation between them).

We found an area by one of the rocky outcrops sheltered from the wind to setup. Martyn found finding ground to accept the HF dipole pegs a challenge, and Caroline decided to just use the rucksack antenna for VHF. Caroline wasn’t surprised to get only 2 contacts on VHF from this relatively low inland hill, so while waiting for Martyn to finish with 5MHz (which he did manage to qualify the hill with), she propped up the 6m dipole on a rock. Calling CQ failed to get any response, but search and pounce got a Liechtenstein contact so she needed 7MHz was needed to qualify the hill. Since the ascent had taken longer than expected, we were running late so didn’t try any other bands. 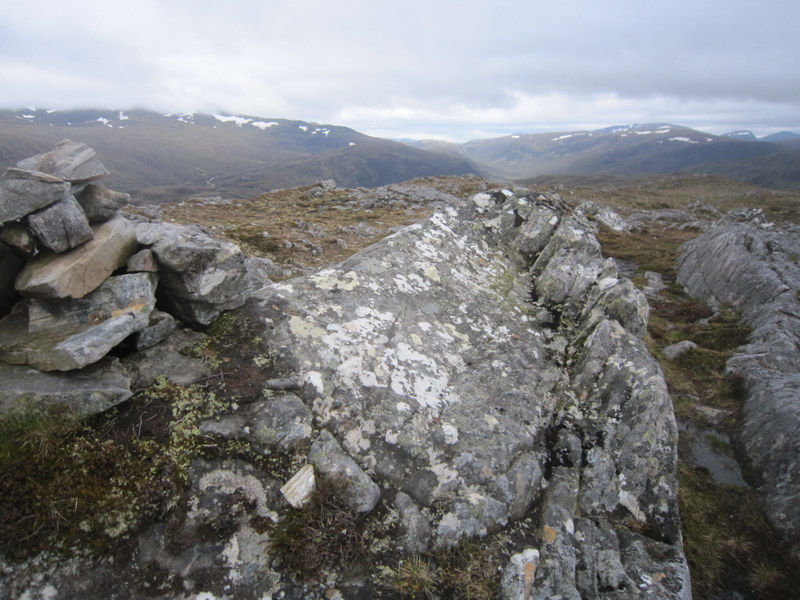 We descended via the path we had wanted to use on the ascent, hoping that we could work out where we should have crossed the river on the way up. We found a bridge over, but our hope that we could get round the other side of the blocked area were thwarted by high fences. We went back and had another look at the ford we had rejected on the way up, and found a sign indicating that walkers should go that way. It was still fast flowing but didn’t look as deep as on the way up, and we hoped it wouldn’t go over the boots or be too fast flowing, and gently made our way over using walking poles for stability. Thankfully the boots and waterproof trousers kept our feet dry. It was then back along the estate track past even more deer and over the bridge with deer grid. 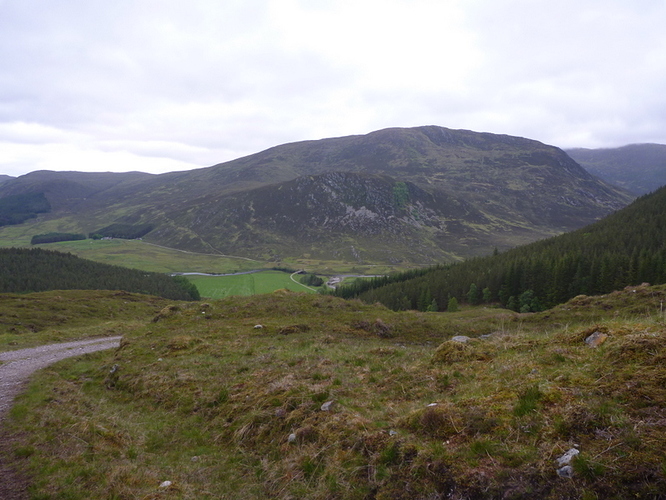 Did we have time for Meall na Faochaig on the other side of River Meig? The weather looked good, so on approaching the public road we turned left and followed it until a track headed uphill at an angle. We followed this as it angled uphill, before bending right and becoming wetter and slightly overgrown and then turning right again heading back east. We followed this until it levelled out heading for what looked to be a small radio installation on Creag Iucharaidh. We then picked our way NW up the spur of the hill before bending round east to the flattish and boggy summit, with a slightly raised stony top which provided somewhere dry to put rucksacks down. The summit was marked by a small cairn with a stick stuck in it. The visibility down Strathconon faded as mist rolled in, but later cleared. It was cold for June so we layered up. Caroline set up the VHF antenna near the summit cairn and had the summit qualified with 4 contacts in less than 10 minutes, but that was all. Martyn took a little longer to get 6 contacts on 5MHz, after which we swapped round for Caroline to get 13 contacts on 7MHz, with Martyn having a final go on 14MHz – 4 contacts in 15 minutes, so conditions not that good. We descended by roughly the same route – finding a slightly better line back to the path. A good day to get two new Grahams activated for SOTA. 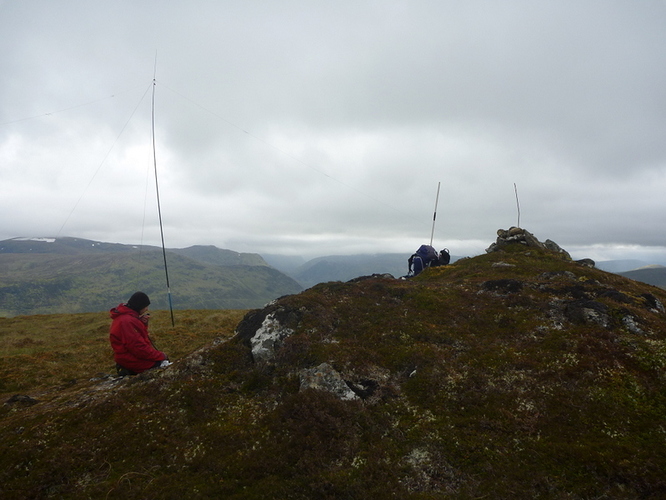