I enjoyed a little activation this afternoon to dust the cobwebs of the 2.3GHz kit. Hill not qualified but who cares? Good summit-to-summit contacts with Andy MM0FMF, Jim MM0GLM and Barry GM4TOE. Full report on my blog at https://www.gm8oti.uk/sota/sota-scald-law-gm-ss-125/

Barry GM4TOE was down here slumming it before the rally tomorrow and so wanted an effortless summit near where he was staying. I suggested Innerdounny Hill SS-169 and Barry did it. But as he’s been a litle unwell recently and his fitness has gone off the boil, it took a little longer than he expected. I knew it was easy to work from Edinburgh and its environs on 13cms and Barry wanted 13cms QSOs. I popped up Cairnpapple Hill SS-254, 15mins drive and 5mins walk. John GM8OTI was on Scald Law SS-125 and Jim MM0GLM was on Beinn Dearg SS-067 (near Comrie and a bit of stretch if you do the horse-shoe).

I managed 2x QSO on 2m FM using the FT-817 + rubber duck as I forgot to bring the handy! Jim was 59++ and Steve MM0XPZ in Greenock was 56. Jim was 58 on 13cms. John was 59++++ and so was Barry when he came on air. We’d been waiting a while and all of us where almost about to shut down when Barry appeared. The conversations were all about how guilty we felt having to leave before working Barry but he was literally on air a minute before everyone else was about to pack up. Close!

Looking at the map, all the QSO were LOS or near LOS. Nothing DX, nothing stunning, no barriers pushed forward. But we had 4 people playing microwaves from SOTA summits. If only Jack GM4COX had not been driving up the M74 we would have had 5 people out meaning everyone would have qualified their summit with 4 13cms S2S contacts. That would be nice. 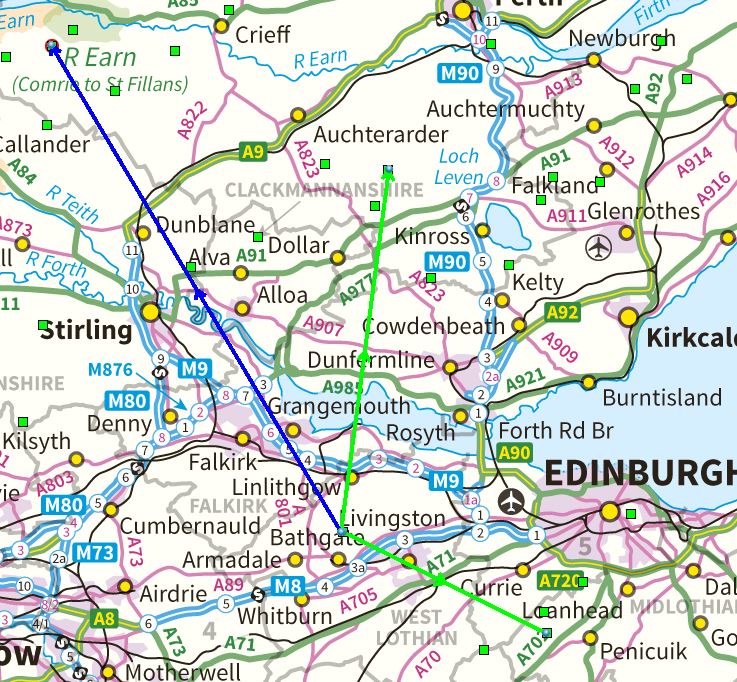 I took pictures of the views but none of the station. D’Oh!

Barry GM4TOE was down here slumming it before the rally tomorrow and so wanted an effortless summit near where he was staying.

Surely this cannot be be the same Barry who took me and my dad Tom M1EYP on 2 very tough Cairngorm expeditions 8 and 9 years ago.

I guess we all get the occasional off day!

Good to see the Wx was kind to you guys.

Jack GM4COX was on Broad Law SS-029 and poor old Andrew G4VFL was on Mickle Fell NP-002 with 4m,2m, 23cms and 13cms. I had a look at the path and it looked maybe OK to Jack but possible a reflection would be needed but worth a pop. Cairnpapple Hill is 15mins drive and 5mins stroll to the top. QSO with Andrew? No idea if feasible.

So the day started overcast but is sunny now with high altitude cloud and a very strong and cold wind. It was really windy on Cairnpapple, so string listening to the 817 above the wind was hard work on weak signals.

My antenna was the double-double quad mounted about 4ft AGL on a hand held pole. 3m RG-400 feeder to the SG-Labs transverter pumped by an FT-817.

1st in was Pete GM4BYF who was running an Intermediate training/exam day at my radio club. 25km and LOS. With Pete running 100W to a 67ele Wimo he was, how do you say, quite strong.

2nd in was Jack GM4COX/p who had to downgrade to the small 4ele PCB Yagi as it was too windy to mount his 24ele Yagi on the summit. Jack was 59+ which really surprised me. I expected him to be noisy unless we had a good reflection. The path was better than expected. In fact later on whilst we were all faffing about with gear changes, I laid the antenna on the ground. The antenna was cross polarised to Jack and pointing into the sky at 45deg. His signal dropped to 57. Ridiculous how strong some signals are on this band.

Whilst trying to arrange a QSO with Andrew G4VFL/P I heard snippets of Andrew’s signal but Paul MM/W6PNG called me on Pete GM4BYF’s station. Paul who is very active in SOTA in W6 and the Western USA as well as NPOTA, spends a few months of the year in the UK and was doing Intermediate exam stuff today. He was, of course, 59+++

Now that’s 3 QSOs… if I could complete with Andrew I’d get QSO 4 to qualify, a new DXCC on 13 (England G) and my best ever DX QSO. It required a few overs and a little help from Jack who was 59 with both of us. But yes, we successfully exchanged signal reports and Jack ordained it a “good QSO”. I was now pleased.

Jack had to use CW but finally worked Pete. Pete lives at the foot of The Pentland Hills (home to 5 SOTA summits) so this impressed me. He could also hear snippets and bursts of Andrew but had to leave to continue running the exams.

Just about ready to finish, Jack helped get a QSO between me and Paddy 2M0IPO completed. Just a little tweaking of antennas was needed to make it a workable exchange. Ah! That was QSO #5 on 13cms.

Ready to pull the plug Jim MM0GLM appeared from his garden in Dunfermline for QSO #6.

Mrs. FMF and daughter have gone out this evening and I think I shall be partaking of a small libation to celebrate. Not her going out but the 13cms fun 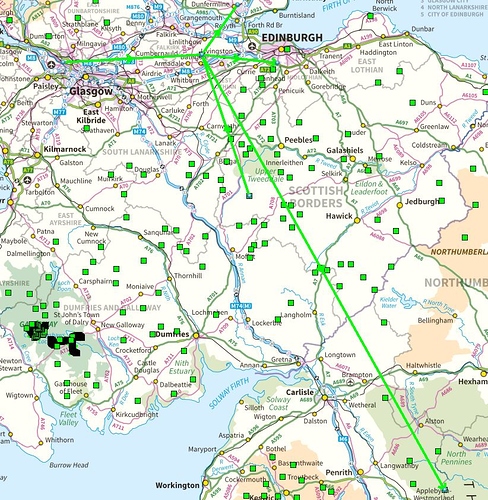 I forgot to say, when setting up I could hear GB3CSB but it was very weak. Oh no, antenna problem. Then I thought “why don’t you connect the antenna to the feeder Andy?”. Ooops! I could hear GB3CSB just by pointing the N socket in its direction on 2320.895MHz.

Later on Jack was rag=chewing with Jim and I undid the antenna and I could still hear Jack, 50km away running ~2W into the 4 ele PCB Yagi. This 13cms lark is quite impressive.

An amusing path to try is Cairnsmore of Carsphairn to Snowdon. It’s supposed to be the longest LOS path in the UK.

Merrick <> Snowdon is longer I think. Well all us GM microwave chaps want someone to go up Snowdon so we can all do Merrick and work the long path and claim the DXCC for GW

Surely this cannot be be the same Barry who took me and my dad Tom M1EYP on 2 very tough Cairngorm expeditions 8 and 9 years ago.

Unfortunately nobody informed a key part of my anatomy that all this exercise with Jimmy, Tom and Tommy was good for my health! Hopefully all fixed but now I have to build strength back up so it is the tiddler hills for a while.

13cm was great (incidentally I was qrv before my posted time, it is just the three stations who didn’t know the difference between GMT and BST -

). I managed a fourth contact calling CQ on my 4m handheld - thought somebody was joking when I got a reply; so I qualified the hill.

I hope you make a full recovery soon Barry so you start doing big walks in the Cairngorm Mountains again.

Great to hear you had a good activation on 13cm.