My good friend Nigel M5TUE finally got himself registered for SOTA, this was to be his first ‘proper’ activation. I say this because back in March 2018 we had operated from Lambrigg Fell G/LD-046 but as he wasn’t registered with the scheme it was only me that logged points.

In what promised to be spectacular weather we set off for the Calf G/NP-013. This is part of the Howgill Fells and will be very familiar to those who travel through Cumbria on the M6. Just South of Tebay the motorway cuts through a valley separating G/LD from G/NP in a very impressive fashion. In contrast with LD-land the Howgills are much more rolling: ‘sleeping elephants’ as Wainwright described them.

Our path took us from a parking spot at the base of Linghaw on Howgill Lane. Beware, if you approach from Lowgill you will encounter the Crook of Lune Bridge: 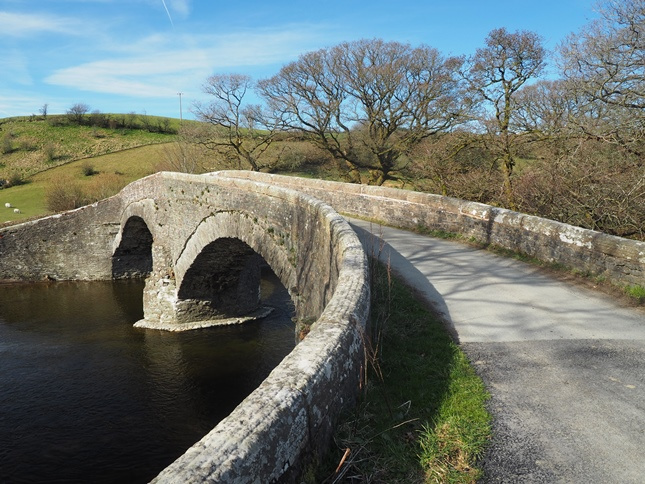 This humped and narrowing bridge will have you reaching for your wing mirrors in haste being only 2m wide. It is certainly the narrowest bridge I have crossed, in the Fiat 500X had only 30cm each side to spare!

We arrived as some paragliding guys were getting ready to ascend for a jump off of Break’s Head - they made remarkable progress up the hill given then 15kg+ backpacks.

We made more steady progress, the blind summits taking their toll on mental fortitude with very little change in scenery to break up the hour and a half walk. However, on a good day the views more than make up for this.

The view towards The Calf 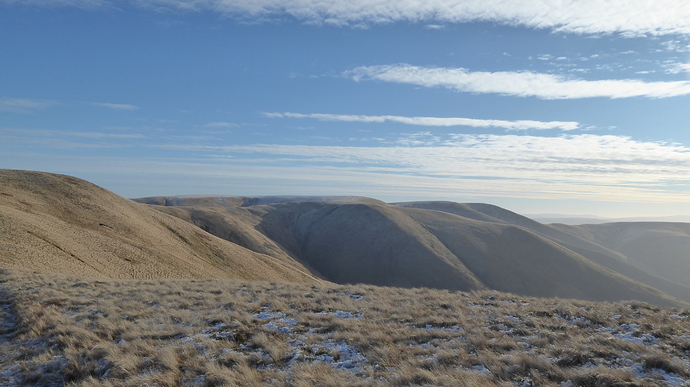 Looking back towards the Lake District - spot the SOTA activator! 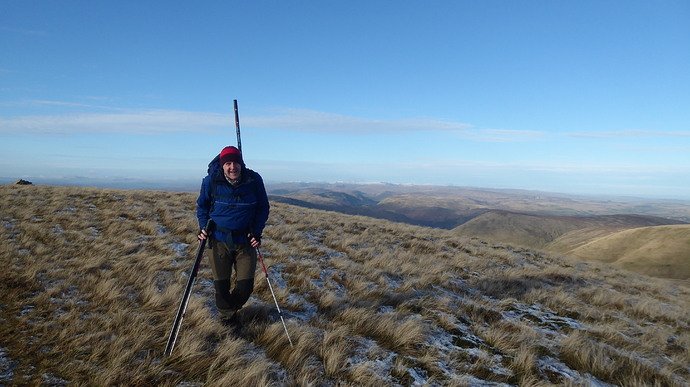 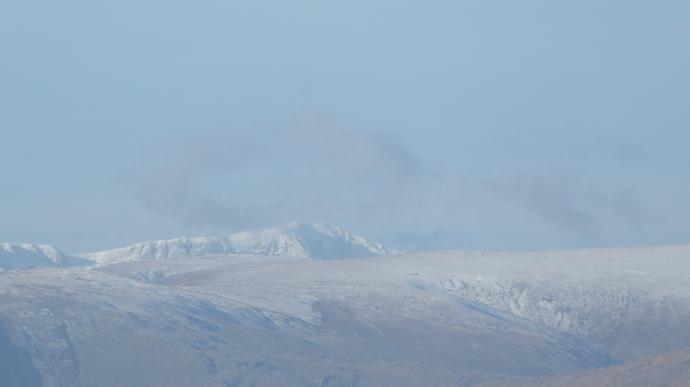 Footing was good, crisp under foot, only a few slips. Tarns were frozen solid. The wind was light. However… in spite of the fantastic forecast upon reaching The Calf the clouds to the South appeared menacingly from nowhere and indeed within 5 minutes we descended into the gloom, not to see another view all day!

Basecamp, trig point in the distance 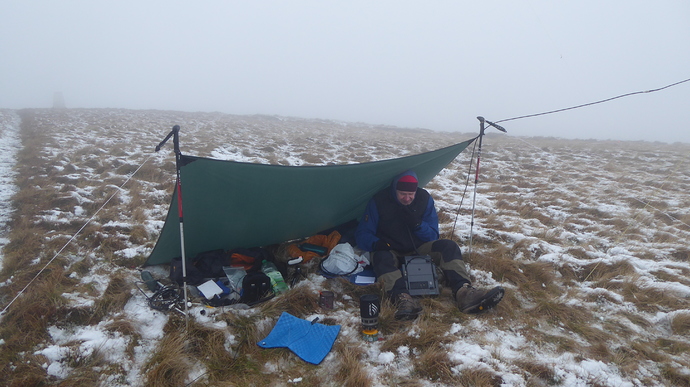 Nigel had bought an excellent tarp in his rucksack which he immediately put to good use and it was an absolute Godsend in staving off the cold. We both setup our equipment:

Nigel had brought two rigs: a venerable FT290R, 2m SSB/CW portable 2.5w and a Philips Simoco FM1000 - a 4m FM rig that really doesn’t belong on a fell, given its’ size and weight! Nigel had made a 4m ladder line Slim Jim and was hoping to get some 4m contacts.

Previous reflector subjects and an exchange with @G8CPZ Andy fit right in with Nigel’s plans to try 2m CW from the fells. I put up a spot and after his first CQ SOTA call Phil @G4OBK from Pickering responded! We were using my Sandpiper Delta Quad 2m antenna which I was supporting manually on half a fishing pole (snapped in the middle in high winds on Red Screes!). Next in the log was John @G0TDM in Penrith. Three SSB QSOs folowed: a S2S with Andy G8CPZ on Arnside Knott (which I also completed), M0YOB/P on Ashurst Beacon and M7SZY/P in West Kirkby also, by coincidence, using an FT-290R! Nigel then dropped back to CW to complete a S2S CW call with Andy G8CPZ. 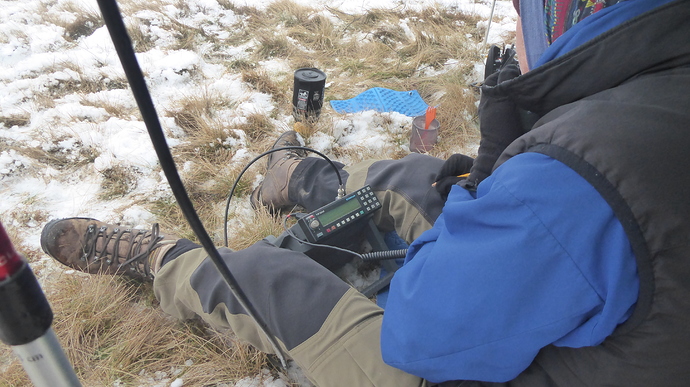 We then finished with 2m which didn’t appear to be working very well, possibly due to atmospherics. Dave @G6LKB came in strong but then calls were futile after that. However, M7MAV/P and 2E0FQN/P were braving the highest North Pennines peak, Cross Fell G/NP-001 but not having a lot of luck with their equipment. I had heard them calling for a while with no takers. I completed a QSO with M7MAV/P and then quickly shouted Nigel over and on the FT-817 he worked both M7MAV/P and 2E0FQN/P - they were somewhat made up that he was the fourth contact in the log. It would have been a very long way to go to come back without points!

By this time the light was starting to dim and both Nigel and I had had enough of the cold! The tarp made all the difference, but eventually the water that had run down the fishing pole into my gloves (mental note, guy the antenna next time!) took its’ toll on my warmth. The Jet Boil did get some use and provided welcome hot drinks.

On the way back we managed to get lost in the fog for a while but luckily Nigel corrected our course and it was probably an easier descent apart from putting a foot in the stream that Nigel zig-zagged across with ease! The weather was far from what I expected but what a great adventure with good company!

The video shows a large number of the QSOs, so if you are in the log hopefully you made it into the video.

The route - left to right, top to bottom on the way back 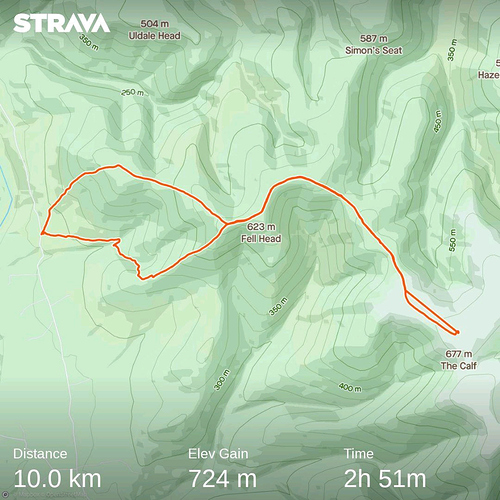