Up early this morning to find constant pouring rain here and at the DL/AL-179 summit (where I had intended going to test my new antenna). Heavy rain is forecast to continue in the whole area through Friday with between 70 and 95% certainty. Luckily by Saturday the rain may stop for the S2S EU-VK action but as the temperature will be dropping also over the next few days, down to around 2 degress, there is a chance of snow on Friday night / Saturday morning.

Current K Index is at 3 but SFI is back down to 75 - lets hope this improves before Saturday.

If I see a break in the weather over the next few days, I’ll head out into the countryside (perhaps not a summit) to test the new 20m vertical to see if it’s working for the Saturday S2S event, otherwise I’ll use the old faithful SOTABeams linked dipole.

I can’t see 5m across the hotel carpark now. Very foggy! I haven’t heard many aircraft either andim only a few km from Schoenefeld.

Stopped raining at the moment - going to set off and see if the rain holds off after all. No fog here but frost and snow above 700m ASL forecast for tonight. Chasers please monitor spots in the next hour - I might just make it - but if the heavy rain starts again, I’ll be turning back.

The trip down to Weichberg was uneventful except for a diversion through a beautiful small village because one of the main junctions on my route is being repaired/upgraded. The further south I drove, the heavier the rain became, until I turned off the main road onto the small road to Rettenbach when it started to clear. By the time I got to the parking spot it was down to a light drizzle, at this rate this is going to work out! I thought. …

I walked up the track through the forest to the summit and into increasing rain - never mind, I’m here now, let’s get busy! I unloaded my two rucksacks and started attaching the 10m mast to the best vertical post available - the holy cross outside if the small chapel. With hands getting wetter and colder I stretched my first “Double Bongo Strap” around the post and just as I was about to interlock the bongo in the rubber band - “TWANG” - it was gone and no amount of searching would find it! OK, have to make do with just one double Bongo Strap, that went on OK and then I unrolled the 1/2 wave 20m coax fed vertical antenna across the ground, attached it’s crocodile clip to the top section of the mast and started winding the thin wire around the fibreglass pole as I raised it section by section. Slowly but surely the antenna was raised. By this time the rain had become heavy but I thought there’s no point stopping now as I’m soaked anyway. The rain had started coming through the sleeves of my so called waterproof winter jacket.

Once I had the antenna raised, I went back to the small table on this summit where I assembled the FT817 and amplifier, connected batteries and turned everything on. 20m sounded quite busy which was a good sign. I checked 14.285 which appeared free, put out a call to check and then started calling CQ. In parallel I tried to place a spot but with water running over the face of the smart phone, it was difficult to type anything in! Then someone called - QRZ? So I went back a couple of times but the caller said they had too much QRM from a station 2 KHz down so I announced I would QSY up to 14.290, which I did and started calling again. About this time I got the first spot out but the call that came back on 14.290 was from someone who had just heard me calling rather than a SOTA chaser and I had a nice, if short, QSO with Panna from near Athens in Greece. We exchanged 5-9 and 5-5 reports - so the antenna was certainly working.

I started to put out another CQ hoping for a SOTA chaser who would have seen my spot but just at this time there was a loud “CLUNK” behind me and the fibreglass mast had telescoped itself down to ground. This was probably just one junction that I didn’t pull out enough with the cold, wet hands as there was next to no weight on the mast.

I took a look and while the mast and antenna were not broken, the antenna had tied itself in so many knots that it would take me 10 minutes to un-taffle it in good weather with non-frozen hands. As I was finding more areas of my jacket where the, now heavy, rain was coming through, I decided to pull the plug and pack up and head back to the car and its heater to dry me out.

To add insult to injury, by the time I arrived home, the rain had stopped completely but the TV said there are banks of rain storms coming through.

Despite aborting the activation (it counts as an activation as I had one contact, and as activated this summit earlier in 2016, I would not get any activation points in any case if I had “qualified” it with 4 contacts) it was still a useful exercise. I now know the antenna works. I know to take more care “locking” each section of the mast in place. I have already found a replacement “Double Bongo Strap” that was holding some other antenna and it’s coax together. If anyone finds the strap on Weichberg - they’re welcome to it. Who knows perhaps I’ll find it there next year but searching for it longer in the grey, rainy environment today was pointless.

I will take both my usual dipole and this new antenna on Saturday for the VK-EU S2S party. I’ll decide which to use on the day - if Long Path to VK doesn’t look good I’ll need the 40 metre capability of the dipole to contact EU stations but the vertical up first to give it a good “go”.

All parts are currently drying out and I’ll most likely untaffle the antenna while watching the TV this evening! 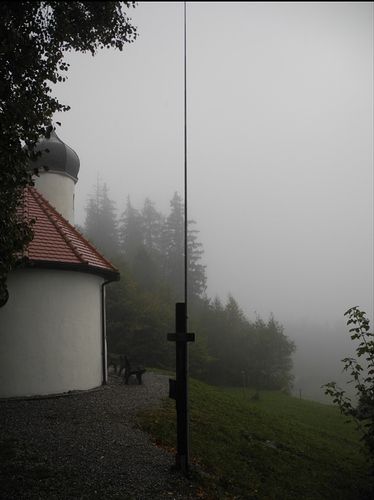