Everything is working properly this time and condx are quite good.

So please give me a call if you have datamode capability in the shack. Currently calling on 18.10158MHz PSK31.

An enjoyable and fun activation of The Cloud G/SP-015 on Wednesday 27th July 2016. I was wondering what band to do. After 15m yielded just two QSOs last time out (albeit one of them was Brazil), I reasoned that I needed to come down in frequency. But not too far - because from 10MHz and below I’m into my dipole and EFLW antennas, and those set-ups don’t get on well with little portable datamode interfaces! With my 20m GP needing some refurbishment work that I still haven’t got around to, that corned my options into 17m.

Cloud summit was very busy with walkers when I arrived, and indeed remained so all afternoon. I set up about 50 yards from the trig point close to the cliff edge. There was no shelter from the breeze, but this suited me, as it removed all hostile capabilities of flies and midges!

Early into the activation, I overheard a passing walker talking to his companion. “Good grief, amateur radio. I was very keen on that when I was younger, many many years ago mind”. Unfortunately, he never came over to introduce himself or strike up a conversation. An hour or so later, one that did was Paul G0KIS.

Anyway, they say it’s good to talk - but not over amateur radio, apparently. I gave all modes a substantial airing on this activation, but no-one wanted to talk! Well, hardly anyone, as these results might indicate:

So is that a sign of modernising communication methods, that typing and reading from a screen is more popular now that actually speaking with a voice? Well, apparently not, as by far the most successful, popular and effective mode was the ancient and obsolete one:

So 56 QSOs for the activation, including double figures on PSK which was pleasing. Conditions were promising. I heard several JAs perfectly readably answering others’ CQ calls. I made two QSOs stateside too. This made me think that 17m is worthy of more attention - but early morning for the East and Pacific, and later afternoon/evening for the Americas.

One really nice one I got was OJ0B, Market Reef. They were working split CW and had quite a pile-up - but my 5 watts from the 817 was sufficient to get a good contact after only my second call! Overall, a very enjoyable afternoon on The Cloud.

I was listening on 17 ssb for you Tom, but unfortunately could not hear you, but there is always another day.
Cheers Ken G0FEX

Thank you Ken, I appreciate that.

I nipped out for the 17m-in-the-evening experiment on Thursday 28th July 2016. The summit ascended was, no surprises, The Cloud G/SP-015. The band was very quiet. I started with 4 QSOs in CW - UR, RA, EA and LZ - but no more takers. I then tried calling CQ on SSB, but got no callers. There was one solitary station on the SSB portion of the band, and that was EA8BWL on Tenerife. I answered his CQ and got him first call.

After seemingly an age of calling on PSK31, I eventually got one reply, and a QSO, from Sergey UR4MLS. But no further takers on data. I put out a few calls on 2m FM but got just one there too - Pete 2E0LKC, Pete then worked me on 17m SSB, as did his YL Anne 2E0LMD. 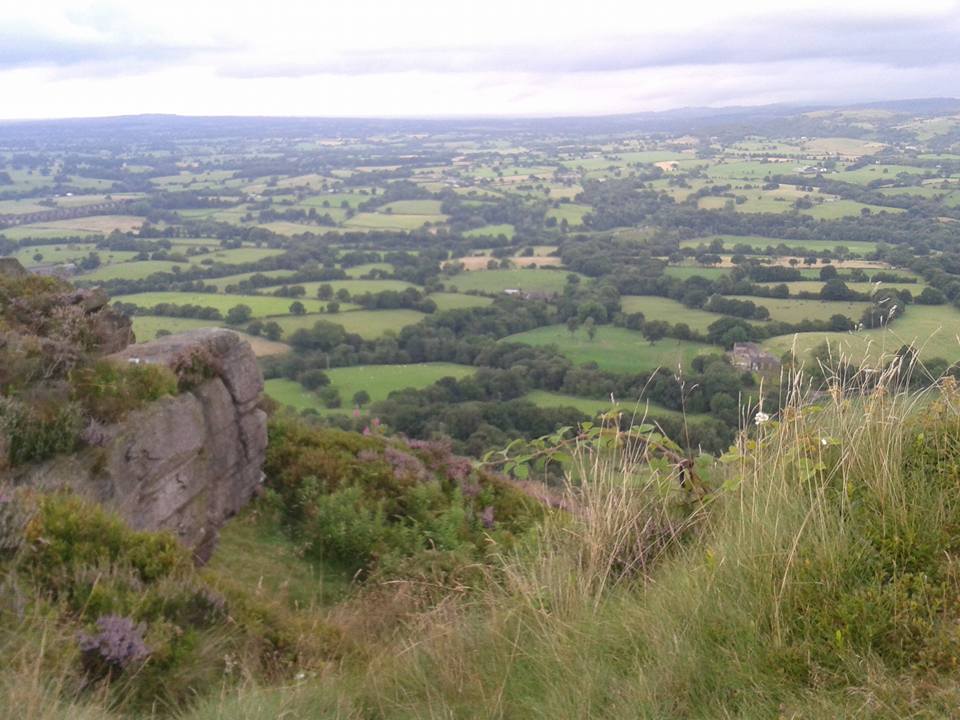 So I set my alarm relatively early for Friday 29th July 2016. This was in order to investigate “The Morning” on the 17m band. Off to The Cloud G/SP-015 and set up the GP antenna by the cliff edge.

Lots and lots of calling on CW, and no response. Not even the skimmers heard me, which might have given a clue as to conditions! Just one other station was heard anywhere across the band on any mode, this being the Market Reef DXpedition station OJ0B.

Although I worked this station on this band and mode the other day, I needed at least one contact to actually record an activation! So I put my call in, and got a reply, and a contact immediately.

The it started to tip it down with rain so I packed up and went home. This wasn’t so bad, as I really needed to crack on with emptying my Citroen Xsara Picasso ready for disposal, and visit some car showrooms to weigh up her replacement.

Yes, it’s time to go our separate ways. She has been my loyal companion for over a decade, but has recently started generously sharing her diesel with the road below. My own generosity does not stretch to getting 200 miles out of a full tank as opposed to the more familiar 500, so she’s got to go.