I had a great time activating Hope Mountain this weekend on 10GHz. Light showers were a nuisance but in 2.5 hours I managed 17 contacts with best DX being 316 km on 2xSSB (Ditchling Beacon, near Brighton). Several other SOTA summits were on but only mine was SOTA-qualifying as far as I’m aware. SOTA chaser Mike G4BLH was out portable and I was able to give him his first SOTA summit on 10GHz over a 90km path.

After Hope Mountain I moved to Axe Edge in Derbyshire where I made a further 11 contacts, bringing the total to 28. My best result yet on 10GHz.

Photos on the SOTA group (see link above).

Is that an old PW Exe dish Richard?

I thought you only had to move yourself 16km in order to be able to count again in the 10G cumulatives. Hope Mountain to Axe Edge is overdoing it a bit isn’t it? Did Hope Mountain turn out to be the favourable 10G site you Hoped it would, or will you be back on Oaks Hill next time?

Hope Mountain proved to be an excellent choice for 10G portable. The move to Axe Edge was quite radical but the idea was to get some of the newer entrants to the band in the log (there are several east of the Peak) and also to make it more likely to catch some East Anglian stations. It was partially successful in both respects. A contest where you can move makes for some very hard decisions about tactics. I am not sure that I have them right yet. The move cost me 2hrs 25mins of peak-period operating time.

Performance on 10G is very dependent on TX power/system gain and thus I can never hope to beat the best stations in terms of points per contact. However, I am fast out of the blocks and I greatly enjoy the obvious sound of surprise detectable in the voices of some of the more established operators when they hear my serial number! Comments yesterday included “where did you find all those stations?” and “I haven’t heard that many contacts for years!”. My points per contact was modest though with an average of just 130km/contact.

I had hoped to do another SOTA summit but that proved impractical.

I had hoped to do another SOTA summit but that proved impractical.

There’s not really many SOTAs about with a genuinely favourable East / South East take off is there? As you know, Axe Edge and Merryton Low are infinitely better than the nearby and higher Shining Tor, and what might logically seem to be the best - Kinder Scout - is notoriously bobbins on VHF/UHF and up.

Have you tried 10G from Shutlingsloe? I imagine that might be a good location (although haven’t tried the coverage map thing), but not a short enough walk from a road to be favourable in the cumulatives. A much more satisfying walk than AE, ML or HM though!

Saying this, I always (or nearly always) get JO01, JO02 and JO03 from The Cloud, which at 343m is relatively low. I expect it would be much more difficult on 10G though - unless it was snowing in Leicester!

You are beginning to understand the problems. The Cloud is not 16km from Axe Edge or Merryton Low. Hope Mountain and Gun were a possibility but Gun does not have the right takeoff for a second site. Cadair Berwyn would be good but would be an “all eggs in one basket” site. Coupled with the site complexities, my batteries limit me to about 4 hours serious portable operating. Even then it’s a heavy system to carry (compared to my normal systems).

Walton Hill CE-002 might be a good choice, a ten minute stroll from the carpark and a good take-off, with rapid access to the vicinity from the M5.

I have added a map that shows the distribution of 10GHz contacts from NW-062: 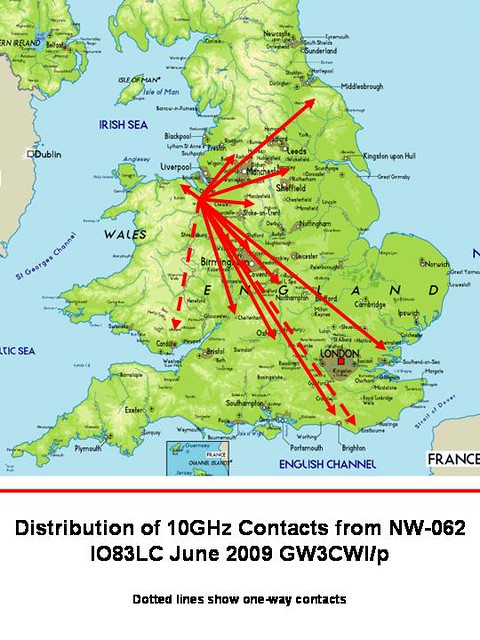